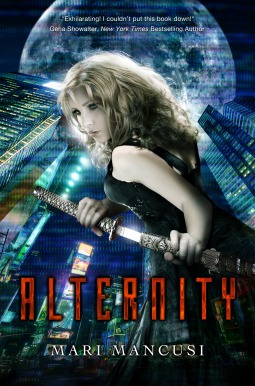 Skye is a gamer, a club kid and is busy testing a game for bugs before its released while hanging out with her DJ boyfriend. It’s a happy life, but rather ruined by increasing insomnia and nightmares.

Which turns out to be the shadows of a whole other world – and a whole other life for her. Life on Terra, a world whose surface has been destroyed after a devastating war, the surviving inhabitants now huddle underground in two distinct classes. The Indys who live lives of luxury and wealth. And the Deep Siders, reduced to poverty and living in horrendous and dangerous conditions beneath, providing the labour that makes the society work. Their lives are cheap – because there is an over-population problem.

And into this comes Skye – only everyone calls her Mariah. Leader of a revolution, saviour of the underclass, trying to bring peace and justice to the oppressed. Or there’s the Circle of 8, who see her as a perfect ambassador for Earth and to encourage more of the population to “Moongaze” and live on Earth instead of Terra – slackening the overpopulation problem. Except, of course, it costs a lot of money to Moongaze.

Skye has to decide between the 2 factions – but also between Earth and Terra and who she actually is – which of her memories, her realities, is actually the real one?

I don’t say this as, necessarily, a criticism, but a lot of this book was predictable. I saw what Skye was going to do long before she did it, I could pretty much see what path she would take – rejection, working with the enemy, being repulsed, back to the allies, the alternating between Earth and Terra again true love soon following. All of this I could see mapped out within the first few chapters. But the reason why it was predictable is because the character was very real, very human and reacted in a sensible manner. It didn’t mean she wasn’t emotional or that she was always right – not at all – but it did mean that you could see what she would think or feel or do because a reasonable person in her situation would have done exactly the same thing. Her reactions are predictable because, in the same situation, I would have done exactly the same thing. She is faced with her entire world being turned upside down several times. She is constantly fighting a battle of identity – who actually is she? What memories are real? What reality is real? Can she be a person who has such small priorities – even if they are HER priorities – when a world literally stands in the balance? Who is the actual person and how much of any kind of relationship can she have with Dawn when he’s thinking of the woman she used to be? (This is an interesting twist but, on the whole, I think the romance is superfluous to the story and, worse, it ends up being hurried or based on false memories neither of which are ideal).

And while it was predictable, that didn’t mean it wasn’t fun. Knowing roughly how the journey will go doesn’t mean you can’t enjoy the nuances of the trip. The world and story are interesting. I particularly love how the revolution was presented and developed. No glorious battle against superior forces, no plucky revolutionary heroes solving everything, even if they were inspirational and did some heroic acts. And there was no quick solution – they didn’t act like their victory would suddenly make everything wonderful and easy and that the whole system would come down nor did they say that just killing the big bad would make the whole system fall apart or magically become just. Their revolution is built on giving the Deep Siders a chance at independence, at separation. They worked to improve the lives of the Deep Siders, give them more advantages and make them less focused on the Indys for their needs – it was a slow revolution, but it was an effective and very real revolution.

There was a twist about the nature of Moongazing. And I did see it coming quite some time away – I don’t know if it were predictable or whether I am just genre savy, but it didn’t surprise me. I was actually feeling a little smug and a little disappointed because the book’s big big twist turned out to be something pretty expected and deflated me. Which means I was caught completely by surprise by the second twist in the book that I completely didn’t see coming. It leaves me at a loss to describe it without spoilers, but I was impressed and it knocked me off kilter.

Class is an issue that underpins this whole book. The Indys, lead by the Council of 8, live lives of extreme luxury and opulence, distracted by tricks and treats and games to keep them amused. Their lifestyles are supported by Deep Siders working in extremely unsafe conditions and exposing themselves to radiation and poisonous elements. They are poorly fed and they often live in squalor, the difference between the way they live and the Indys live is horrendous and unflinchingly portrayed. We also see, throughout the revolution, the ways the Deep siders are kept under control – such as preventing them from congregating, trying to keep the different deep sider villages at each other’s throats and keeping them uneducated. All classic tactics to keep an underclass down.

One thing I would have liked is more parallels drawn – I know it risks becoming a PSA, but it would have been nice to contrast Terra with Earth more. Skye frequently questions how the Indys can ,live with themselves, living in such luxury which is supported by such deprivation – is it different from Earth where chocolate, coffee, diamonds, designer clothes and a dozen other luxury items are so often dependent on appalling working conditions in the developing world to produce? There’s a nod to it, but only a slight nod – but there is the nod there.

What I would have very much liked in the revolution and among the Eclipsers is some actual Deep Sider presence. The Deep Siders are pitied, but other than bowing in worship to Mariah, they don’t do anything or get involved in revolution. They are people to be pitied, to be saved and in return they show fawning gratitude – but where is there agency? Where are they in the Eclipse’s organisation? Why aren’t they there fighting for their freedom? I’m not fond of this saviour trope – that the poor, down trodden, oppressed masses will be saved by a section of their oppressors. Sure have some Indy involvement – even Mariah being a member of the royalty helping – but have the oppressed people actually have a presence in their own movement. We see the trope time and again in fiction and it bleeds over into real life a lot – ignoring or downplaying the oppressed’s role in ending their own oppression.

Related to this, the Deep Siders frequently suffer from deformities because of the conditions they have to work under and the high radiation levels – which would be an introduction of some disabled people. But, again, they’re nameless, pitiable masses who exist to worship their saviours. The disabilities seem to exist just to make them more pitiable.

Inclusionwise, this book had some background POC and no GBLT characters. But the book only really had 2 characters, everyone else was background at best, this was very much a focus on Skye and Dawn’s stories.

This book surprised me, which is pretty rare. And even without the surprise, it was a fun, interesting (if a little clichéd) tale before then. With the surprise it definitely lifted and raised it’s games, threw in some very real characters and introduced some pretty advanced concepts – a fun read and definitely worth a presence on the shelf. It’s not perfect, there are flaws in the depiction and I did spend a lot of the beginning of the book thinking  that I’ve watched Total Recall and the Matrix and had a lot of déjà vu from them. But it developed well, set its own path and had enough original elements to pull it ahead.

A copy of this book was provided through Netgalley to review
Posted by Sparky at 3:00 PM