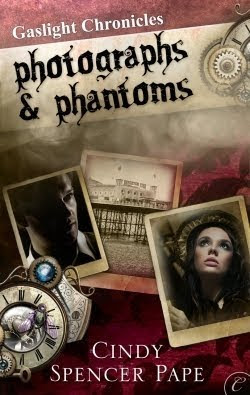 Photographs & Phantoms is only sixty-six pages long and therefore is more of a novella than a book. Though we do get to briefly see the Hadrian family, whom we met in Steam & Sorcery, this novella involves a brand new relationship.  In the interest of fairness to Cindy Spencer Pape, I feel it's once again necessary to disclose that I am not a fan of romance novels, so please keep that in mind as you read this review.

Photographs & Phantoms once again begins with a confirmed bachelor. Kendall Marquess Lake, is a member of the Order of the Round Table and he is sent from London by dirigible to Brighton, to investigate a case involving the niece of Lord Drood.  Kendall is not the least bit excited by this case, though it is the first chance he has had to engage in fieldwork for awhile.

Amy is a professional photographer.  Though she has enough money to do without employment, she is compelled to work because of the love of her art. Having had one season out in society, Amy decided that she was not suitable for that sort of life and instead chose to focus on her passion. For Amy, this would mean a life of spinsterhood, but one she was willing to accept for the freedom that being an artist gave her. Unfortunately for Amy,  it seems that when someone sits down to have their photo taken, shortly afterwards they die. Could this be a manifestation of precognition because is after all a direct descendant of Merlin, or is something about her art killing her customers?

One of the things I detest about romance novels is how quickly love is declared.  In the case of Photographs & Phantoms, it rises to the level of absolute ridiculousness.  After knowing each other for forty-eight hours, Amy and Kendall fall hopelessly in love.  Kendall goes from claiming discomfort about his childhood friend "getting leg shackled", to proposing to Amy based on the strength of his physical attraction to her.  At one point, he even admits that he has gone to long without getting laid, yet somehow, his lust magically turns to love when he saves Amy from a man determined to control her. Of course, Amy is equally smitten but this is okay because apparently, this ridiculous love at first sight thing runs in the family.

Unlike Caroline Bristol, from Steam & Sorcery, Amy is not an active protagonist.  Her only claim to independence is that she works, which is quite uncommon for women of that era of a certain class. I do however like that she is the one who initiated sexual activity with Kendall.  This however is blighted by the fact that this conventionally beautiful woman doubted her sexual attractiveness and worried that her breasts were too large.  Really Pape?  Oh shades of Meridith Gentry.

This novella once again included Eleanor Hadrian as its sole character of colour.  She is described as having "dusky skin and dark eyes of the subcontinent."  That read as a fancy of way saying the exotic girl - you know, the one who isn't white. It is up to Eleanor to figure out why Amy's customers are dying.  Though we know that all of the Hadrian children are talented in someway, in this instance, it's Eleanor that is the focus but it ends up placing her into a service capacity because her powers are used to save the White ladies. To make matters worse, the White antagonist gets his powers of evil from gems from India.  We are told that he mentally unstable and of course it's the fault of the evil Indian jewels.

I think that a large problem with Photographs & Phantoms is the fact that it's a novella. One must absolutely suspend belief to accept that the lust Pape wrote about is actually love.  Though it is a steampunk novella, such a short piece does not allow time to focus on the wonders of the new mechanical world or give a true sense of the era and setting. So much potential was lost, simply because of the brevity of the work itself.   Photographs & Phantoms isn't a page turner - at least for me, but for what it is, it's not dreadful. If you have time to spare while waiting for a plane or a train, it will kill the time without rotting too many brain cells, but don't expect to be overly engaged.

Posted by fangs for the fantasy at 3:00 PM