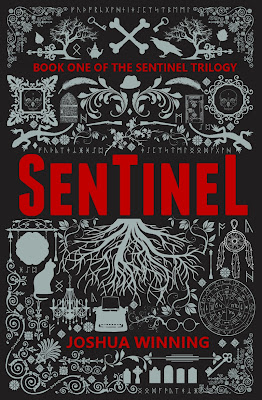 Nicholas lived a very ordinary life in Cambridge – until the fateful day his parents died.

After which Sam, his parents’ oldest friend, swoops in to try and get him out of Cambridge, to go stay with a godmother he’s never heard of in a large house in the countryside. What should be a simple trip is made harrowing by attacks and the revelation that his parents did not die by accident – they were killed by demons.

Which is what Sam, as a Sentinel, needs to battle and oppose. First and foremost that means getting Nicholas – who is special – to safety. But then he needs to help the besieged sentinels, including those who have been attacked and the increasing number who are dying

Unfortunately if I had to sum up this book in 2 words they would be “vague” and “slow”.

In this world we have evil dark demons of badness who are doing dark and nefarious things. They’re either coming to Earth or want to come to Earth or are on Earth and we wish they weren’t and they’re going to do bad stuff while here

Then there are the good guys called the sentinels. They fight the bad things, for reasons unknown but positively related to the bad guys being bad. I don’t know what the sentinels are, how they started, what their symbols are, what their resources are, what they do or how they do it. But they’re the good guys and they fight the bad guys. They also serve something called the Trinity – I have no idea what that is beyond the fact it probably isn’t the Christian Trinity. Esus is also involved as well – Gaulish Celtic god (not that the book tells me that, I just know the name. We just have Esus. He wields a mask. He’s important somehow).

Then we have Nicholas, the 15 year old. His parents were sentinels (tragic parent death) and he is special. How he is special I don’t know, but he was born special. I don’t know how. He may be able to do things. I don’t know what. But his specialness is such that the bad guys want to kill him and the good guys would rather that didn’t happen.

Did I mention this book is vague? Because it’s really really really vague. The generic nature of so much of this book and the complete lack of any attempt to develop or characterise the world its set in makes it incredibly frustrating to read. What is happening? Why? How am I supposed to get invested in this? Will someone please explain things?!

Then there’s the slow. The first half of this book is spent with Nicholas grieving for his dead parents (who die in the opening chapter so I have no idea what Nicholas is other than mopey and grief striken) and then wandering around while every doesn’t tell him anything. Sam, Liberty and other side characters occasionally wander off to be intimidated by murderous demons (who, because of the vagueness, could just as easily be murderous knife-wielding psychotics) and pretend to Nicholas that everything is fine. At one immensely frustrating moment, Nicholas actually finds a journal of past Sentinel activities and doesn’t read it to is. Whether he reads it to himself, I don’t know but the reader gets no enlightenment. This is frustrating.

At the half way point we get the big reveal from the spooky woman who is way older than she looks – DEMONS ARE REAL!

What… you wanted more? Tough, that’s the big reveal. DEMONS BE EVIL AND THEY BE OUT THERE. Now run along.

Along the way the ghost of an old woman possesses a cat because… I have no idea. Reasons. Because we needed a disapproving cat glaring at things. Nicholos shows us that he’s the spunkiest of them all and decides to react to the whole demon revelation by having nice long hikes in the snow around the safe house and making friends with complete and utter strangers and deciding to trust them. As you do. Of course, it would help if someone told him that the demons were in the habit of walking around in human skin to gain your trust but ABSOLUTELY NO-ONE TELLS ANYONE ANYTHING! But this damn fool spunkiness is necessary to actually shoe horn an ending into this book

And that ending is horrendously anti-climactic and I’m left feeling that even the worst the bad guys can throw at the world can easily be defeated with a high powered rifle or an axe.

More interesting than Nicholas is Sam and Liberty who are investigating stuff for reasons (lack of detail error, boredom levels growing) which all goes wrong anyway. I think it’s supposed to be ominous foreshadowing except for the complete lack of any kind of detail and the general swimming through molasses nature of the plot.

In terms of inclusion, Liberty is Black, and she’s skilled and capable. She’s actually a decent portrayal if we got to see more of her and, despite having to be rescued one time, she’s the only woman in the book who isn’t cowering and timid. Nicholas’s mother is timid, the wife who hides in the cupboard (so little engaged am I that I can’t remember her name) and the 500 year old Jessica who cowers in the face of evil and hides behind a 15 year old boy. The whole book is full of straight people as well.

Sam is a rare inclusion in that he is a very active old man. While he often wonders if he, at 70, can possible do what he has to do, he still steps up time and again, fighting hard, leading and continuing to bring the fight to the darkness. It’s one of the better portrayals of the elderly I’ve seen in the genre.

In the end, I don’t even know what to say. I can’t even say this book has potential because I’m not told enough about it to assess that. I have a generic bad guy force, a generic good guy force and a teenaged chosen one. I couldn’t engage with any of the characters or their issues; I couldn’t really believe any of them. About the only one I have any sympathy for is the cat, everyone else is too under explained or has too much mopiness without me getting to know them in any meaningful manner. The plot bemuses me with its big gaps and reliance on blithering character foolishness and in the end it closes with a grand anti-climax.