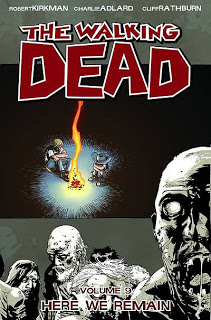 After the massacre at the prison, the group slowly comes back together and settles at Hershel’s farm. Everyone starts to deal with the magnitude of their loss and starts to plan where to go from here.

Any thought of staying is bashed by the arrival of Abraham, Eugene and Rosita. Abraham comes with dire warnings of Herds - huge mobs of zombies that they could never defend the farm against (which presents the quandary - anything defensible is sought out by other living people, anything the living don’t want can’t be protected from the zombies).

Eugene though, has an offer of salvation. He claims to have the cure for the zombies, information that could finally put the world back together - but they have to get to Washington DC to use it.


One thing Walking Dead is good at is over-all pacing for the whole series. After the extreme action and emotional hits of the last volume, this volume was considerably slower - not slow, but giving the reader chance to catch our breaths and deal with the aftermath, rather than hit us with more action before we’ve had time to process.

The dominant theme this volume is dealing with death. After all, so many people died last volume, all of them violently - and, for that matter, over the series - that everyone is grieving and suffering some trauma. It showcases the different ways the characters are dealing - or not dealing - with death.

Maggie has lost her father, 6 siblings and her neighbours (we also assume her mother, albeit before the apocalypse). Everyone she had any connection to before the zombies rose is now dead; all her relationships now will be formed post-apocalypse. Her reaction to this is to purge the memories of those she lost - she wants to leave the farm which must be saturated with painful memories for her; she wants to move on and even forget she had a family since she had such a large family all of whom have died.

Sophia has, if anything, gone a step further - completely forgetting her parents and putting Maggie in the role of mother. This is very similar to the reaction of Bill and Ben when their parents died and they were adopted by Dale and Andrea - they didn’t understand what had happened and they just looked to them for parenthood.

Michonne and Rick have both reacted to grief in a similar fashion - an almost delusional state. They are hallucinating - albeit, they acknowledge the fact, they know they’re hallucinating - but they draw comfort from almost haunting themselves with shreds of their loved ones. One wonderful part of this is, even when they acknowledge they’re mentally ill, neither of them feels ashamed of the fact. Sure, they keep it a secret because they know how they others will react, but they know it brings them comfort and they’re not going to let shame deprive them of the last contact they’ve managed to keep with loved ones they’re not ready to let go.

Perhaps the most starkly affected by death is Carl. While the other children have largely dealt with death by denying it or ignoring it, Carl has almost wallowed in it to a point where he completely accepts death as something that is going to certainly happen to everyone, probably sooner rather than later  (even when Rick tries to talk about them being “separated” Carol almost brutally says “you mean if you die”, Carl has fully embraced the possibility - even the probability - of Rick dying) - especially as perhaps the only child who has had the full horror of the situation explained to him by his parent and the only child who has been forced to kill both zombies and living people.

Carl’s childhood has been more shattered than the others and it’s really clear this volume - with Carl grieving and angry but also alternating between his assurance that he can protect himself and doesn’t need anyone - even Rick - while at the same time being fragile and hurting and desperately clinging to Rick. He alternates between child, and not just adult but almost a combat veteran. Even the way Rick treats him over the series shows his own doubts and uncertainties - when Rick is afraid (like at the original camp) he teaches Carl to shoot and protect himself. When he feels safer (Hershel’s farm), Carl is not included in the shooting lessons. When he feels really safe (the prison) Carl is encouraged to play and he takes Carl’s gun off him. Yet now, feeling more unsafe than ever, Rick not only gives Carl a gun, but encourages him to learn how to drive and be ready to stand on his own - anticipating his own death. It really shows how Carl is caught between adult and child.

The death has also shifted their perceptions of the true threat. Dale is now more worried by the living than the dead after Woodbury’s assault. Andrea now greets strangers not with wariness but a gun pointed at their head. There is no benefit of the doubt, no trust left for the living.

In terms of issues we have some really good scenes with Michonne and Rick, them bonding over their mutual mental illness, being support for each other. Michonne has Rick’s back - not just physically as we saw her saving him from zombies coming behind him, but emotionally as well. When Rick fell apart, Michonne was there to provide emotional support, reassurance and common sense. Michonne has fully joined Rick’s group - clearly seen by her choosing to stay with him and not go in the truck: Michonne’s allegiance and closeness is clear.
Which brings us to the problem. When Rick decides he never wants to make decisions, not able to stand the guilt of responsibility, he says it to Dale, the only other straight white man in the group. It’s like he’s the only one possible who could lead them; despite Michonne’s proven competence and closeness to Rick. It’s an ongoing problem with the series, a straight white man has to lead - we had a brief co-leadership-ish with Tyreese, but never with a woman and that was temporary. And now we have Abraham and Eugene joining the group - Eugene and authority to be listened to and Abraham another powerful leader figure. They were joined by Rosita as well, but she was barely more than a name - the straight white men were the ones worthy of attention.

Which makes it even worse that Eugene’s rather dubious claim was so completely accepted. They have no proof of his credentials, his story is dubious to say the least and the very idea that, in a post apocalyptic world, the concept of classified information needs to be adhered is ridiculous. With no functioning government there can be no government secrets - and if Eugene does have the key to solving the dystopia it is beyond foolish to not share that information - all it takes is one bite or even a fall, and Eugene takes that information to his grave


While there are some stretching explanations we can give - Abraham desperately needing a goal to focus on, everyone being so desperate for a solution they’ll take a chance or even just needing somewhere to go after realising that Hershel’s farm isn’t secure; it doesn’t change that the straight white man’s word was sufficient when any character who isn’t a straight white man rarely has any kind of input on anything resembling decision making.