Master of Plagues by Dewey B Reynolds 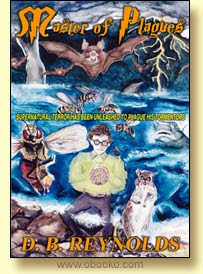 I try not to DNF books. Part of me always feels like I have been defeated by an abominable foe when I do not finish a book. I become driven to continue, to keep reading no matter what – literature will not defeat me!

Alas, sometimes it happens. But usually I fight the good fight for a long time before putting down the book, and this was no exception

The problem was this book came out swinging. Within the first 10 pages the book launched its first assault on my brain and it didn’t stop. Never did I think a book would lay siege to my tolerance for even the worst hacked together writing so early on. I should probably have put the book down right then and written it off as a book I simply could not read. But I wasn’t one to quit the field of battle without at least trying to fight!

By page 25 it was clear I was losing, my meagre defences were falling, I was putting the book down every other page to gape in shock at the atrocities perpetrated on the page. I had so many notes I think I had written more than the author

20 pages later, I admitted defeat, I could not read one more page of this book. Raise the white flag, the writing had killed me.

And it was the writing. I have only actually come across one book that had worse writing – and I’m pretty certain that was written by a non-native speaker whose English was very poor.

We open with a group of 8 university students playing a wicked prank on the protagonist. This prank takes 3 chapters of the most painfully long writing imaginable. Every one of the 8 pranksters is described at pointless length. They each discuss the prank, then repeat the discussion, then repeat it again, then again and then yet another time. For some bemusing reason each one decides to tell the other what their phobias are (rats, snakes, bats, hurricanes, bees, ants, tornadoes, sharks).

Here is a sample of the scintillating dialogue:

“This very room gives me the creeps. In case you didn’t know, rats, especially the really big ones, drive me nuts. I just saw one with big glowing eyes.”
“You’re from New York city, Anthony. New Yorkers can’t help by have a big fear of rats. They’ll bite a whole into you the size of the Grand Canyon.”
“You’re right, Prudence. Us New Yorkers know about big rats.”
“I take it that big rats are your biggest fear, like your number one phobia.”
“Yes they are!” Anthony spoke with a tremor.
“Know what my biggest phobia is?”
“Tell me.”
“Bats!” Prudence detested
Anthony ceased from his brief tremor. He couldn’t believe what his ears had absorbed. “Did I hear you say that bats were your biggest phobia?”
“Yes,” Prudence rectified.
“Guess bat and rats can both be creepy”

{skip more damn musings about bats which no-one cares about}

Dana belted out a strong giggle. “You guys, we’ve all got something that we’re in fear of. For example, I’m scared to death of bees. “

After this, Megan tells us she’s afraid of ants. Which she’s already told us, but more repetition is needed, and Anthony sums up with this line

Note that this agonising section of dialogue happens AFTER Anthony has already told us he’s scared of rats (twice) and after Dana has explained her fear of bees. But in case you missed it the first 3 times they said it, Anthony’s there nicely summing everything up for us. This dialogue – complete with random word uses like that bemusing use of “rectified” and belting out strong giggles and ears absorbing things rather than hearing them – is typical of the entire book. Everyone talks like this. Everyone. Then they just repeat everything they’ve said all over again.

And each of the pranksters comments on the motel where the prank is being held being in a bad part of town. Which means we have a conversation about it 3 or 4 times over.

I can’t stress enough how long winded, repetitive and just incredibly pointless the dialogue is. The prank gets dragged out interminably for pages of convoluted announcements littered with malapropisms, then there’s a random and apparently completely unrelated and irrelevant murder in the motel room next door – but we still have to go listen to the 30 year veteran NYPD detective have a long discussion about the social ills of homelessness with his partner, completely ignoring the actual interspaced with a surprised “gosh.” I kid you not, “gosh.” This police veteran just said “gosh.”

Then there’s a giant rat which everyone is surprised by because it’s a big rat. Fair enough – except it’s WAIST HIGH to a 6 foot tall man. That’s not a giant rat, that’s an escapee from a DnD monster manual. The rat follows the protagonist onto the subway and doesn’t bite him to which one of his fellow passengers asks:

“Sir, do you possess some type of power.”

… What? He patted a rat. Who randomly assumes superpowers?! “why yes good citizen, you have pierced my secret identity! I am Petting Man! I leave no animal unfondled!” After which the whole subway decides to hail him as a hero. No really:

“Passengers surrounded Stuart with the adulation of a worldwide celebrity.”


He petted a rat?! What would you do if you saw him ride a horse – spontaneously orgasm?!

But I must move on because there is more awful to cover – he gets home and we have an answer machine message from his parents who feel the need to spell out the course he’s taking and the qualifications he’ll receive. Do they think he’ll forget?

And then it gets really silly. A Rabbi from his past has left the protagonist a silver medallion of specialness that he decides to randomly invoke a cobbled together ritual out of Wicca for Dummies on. Why? I have no freaking clue, he just decides it’s time to consecrate a Jewish amulet to the 4 classical elements – then he gets pulled into outer space (no really) where we learn the author seems to believe our solar system is the Milky Way but he does know the planets and we are told… at length

At which point I hoisted the white flag. The dialogue with the extra-terrestrial Rabbi ghost finally did me in. I’m actually kind of in awe at how bad it was.