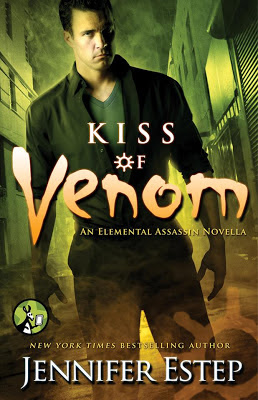 With so much regret to mull over, it’s almost a relief when Owen hears a couple of assassins planning to take Gin down. The least he can do is try to keep her night undisturbed.

In some ways, this is exactly the kind of short story I want in a series that is this established – something to give me an insight above and beyond the standard plot, taking someone else’s point of view other than the protagonist I’ve seen over and over again, getting their perspective on things that maybe will show the events in a different way from what I’m used it. After all, the series is 8 books long, not including short stories, it’s good to hear from the characters who follow Gin around, see what their version of events are especially since Gin has had personal conflicts with just about everyone.

So opening the book and seeing Owen’s point of view was a big plus to me. Especially after everything that happened in the last few books with his ex-girlfriend and then the action at the Rotunda and trying to make up with Gin.

But… Owen doesn’t exactly have an informative or deep point of view; about the only new insight I gained was his regret of all the years he lost with Phillip, the friend he cast aside because of Salina’s lie. Other than that?

Woe! I let Gin down! Wooooe!
Woe! Bria hates me because I let Gin down! I deserve it. Wooooe!
Woe! I am such a bad person!
Woe! Gin hates me – and she totally should!
Woe! A woman flirted with me and Gin saw and now she’s hurt! Woe, I’m a terrible person!
Woe! I treated Phillip like shit for years because I’m a terribad person! Woe!
Woe! I let my sister down! Because I’m a terribad person! Woe!
Woe! My extreme depression is now ruining Phillip’s night! I’m the worst person in the world! Woe!
Woe! I didn’t tip the waitress enough! I’m scum beneath her shoes! Woe!


Ok, maybe not the waitress, but Owen is one set of skinny jeans and some eye-liner from going full blown emo on everyone.

It’s not that Owen doesn’t have every reason to feel guilty and need to make it up to everyone – he most certainly does. But this format of story, getting to see the plot through a different set of eyes, is a chance to show things we’ve missed but Owen’s guilt and quest for redemption are already readily inferred from the last book and, no doubt, will be really clear in the next one. Owen feeling bad for acting like an arsehole isn’t a revelation nor does it bring in any new nuance we haven’t already read.

When the action started things definitely perked up – Jennifer Estep writes a good fight scene and it was nicely tied in with both the overarching meta and the new scary yet mysterious big bad that is lurking on the horizon which nicely meant the story wasn’t lurking in limbo, completely unrelated to the main plot line – which is a risk with short stories.

It also continued another theme I like about this book – women are considered dangerous. This isn’t me praising the use of weapons as a stand in for strong women – we’ve complained about that before – but I mean the way these books, the city of Ashland, treat women.

Gin isn’t dangerous for a woman. She’s just plain dangerous. And so are a lot of other women. Gin, Bria, Mab, numerous other enemies – many women can be dangerous in this world. And no-one ever expects them to be otherwise. There’s no “oh my god, the Spider is a woman!!! How could she be!” there’s no assuming Gin, Bria or anyone else is weak because they’re female. There’s no shock that a woman can fight. There’s no presumption that a woman can’t fight. It’s interesting to see a culture where female weakness is not assumed, even if most of the fighters are male (but even then, I think that’s most of the grunts not the higher level main assassins).

In all it’s not a bad book, it’s fun, it is part of a world I love and has the characters I definitely enjoy. But it’s also a very skippable book – not just in terms of lack of major plot development, I don’t expect that from a short story, but in all aspects; I’d miss nothing missing this book (except the mental image of emo-Owen), which is a shame.