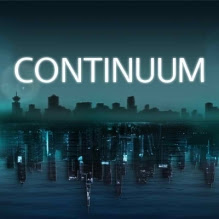 In the future Kiera is having her CMR chip poked at and she asks what happens to their memories which are constantly recorded – she assumes they get erased every 36 hours. And the tech dodges the question. She presses and he lies – which her CMR tells her. He admits that he’s heard that nothing is erased, that the archive goes back years. Every waking moment Kiera has had the chip has been recorded. Kiera is horrified that her entire life is being recorded.

In the present at the police station there has been a major cyber attack attributed to Liber8; everyone password to their email accounts has been changed to Liber8. As to the fallout of that? One detective attacks another detective because he was having an affair with his wife. As Carlos says, hope everyone likes being in the glass house.

They consult with Dillon and he asks Betty to take advantage of the absent security to check the email accounts of anyone suspected of being close to Liber8 – both Betty and Carlos are very uncomfortable with that.

At Liber8 headquarters, Sonya isn’t happy – Lucas’s hack was supposed to get them private info not cause chaos. He claims it’s part of his plan, which doesn’t help because she wants to know when he was going to let her in on that plan. Lucas responds by acting more creepily and more cryptically. He leaves and goes to a van, opens it and talks to… Kagame! Who is also dead! Another Lucas hallucination? He tells Lucas to bring the city to its knees.

Talking to Alec, Kiera thinks it’s a great idea to hack Gardiner’s email while the attack is happening and see where he is. Alec passes on breaking into a CSIS agent’s email (this is the same Alec who was perfectly happy hacking into spy satellites and hacking to produce Kiera’s heavily redacted false credentials…). And phase 2 of Lucas’s plan hits – all the traffic lights are on green, causing a car accidents.

Back at the Police station the mayoral candidate Jim Martin (Carlos’s old friend, in Liber8’s pocket) is on the news promising miracles and Dillon gives a big speech about the city falling apart and how they should use the opportunity given to go after anyone who has considered a pro-liber8 or anti-police agenda. He’s doubling down on his police state. A series of police raids grand many people off the street at gun point. Police state is a go.

Dillon presses Betty about finding the hacker and they talk about her extreme discomfort with using illegal acts to pursue him and the drag net arrests – arresting people for looking at the wrong website or for writing an email that says Liber8 may have a point. Dillon completely dismisses her concerns.

As for the Jim Martin, Travis intercepts him to request that he arrange a meeting between him and Kiera over the disappearance of Garza. Otherwise he can kill Jim slowly and painfully. His choice.

And at the police station, Julian releases a speech about how this loss of privacy is illusory. They never had privacy, people were already reading their emails and snooping on them. Kiera interprets this as claiming responsibility (I interpret it as very astute). And they introduce Agent Lewis from CSIS who clashes with Kiera almost instantly – she’s looking for Gardiner and suspects Kiera. Dillon asks Kiera for a written report on what she was last doing with Gardiner so they can brush it all aside.

Alec contacts Kiera after seeing Julian’s broadcast – he’s furious because the hacker may be using ARC, his technology which would mean Julian stole it. Kiera leans more towards Julian claiming credit for something he didn’t do (I don’t think he actually claimed credit).  And then Julian enters the police station and gives himself up – predicting Kiera would be there to arrest him randomly anyway (not inaccurate given the sweeps).

Kiera questions him and he says he’s not responsible and says again that he’s not affiliated with Liber8, that he believes in winning hearts and minds. Julian also says he turned himself in to ensure he didn’t take a bullet in self-defence, Carlos tries to deny that would happen but Julian’s almost amused by that naivety. And he’s there to report a crime – reporting Alec for a dramatic crime against humanity

Alec meanwhile has realised it’s Lucas who has created he virus using code Alec left in his cell phone. Which means he’s confident that he could track him. Lucas is still getting input from his Kagame illusion. Kiera and Alec try to track him, but he needs to stop moving in his server van.

Meanwhile Jim Martin has a spot of bother with his emails between himself and Sonya being revealed. He dodges but his wife is right when she tells him he needs to get out from under Liber8. He probably doesn’t help that with meeting with Sonya who isn’t amused with him either – and wants to see Julian.

He goes from there to the police who want to talk to him as part of their huge sweep, and Dillon wants to apply the metaphorical thumb screws but Carlos, still friendly with Jim, goes more softly softly. Jim also throws out that the police have been bought by Escher; which Carlos dodges.

Emily (Alec’s girlfriend, working for Escher) has realised that all the chaos could only be caused by Alec’s highly invasive ARC programme – and he could stop it by shutting it down. Alec talks to Kellog who wants to know, using Alec’s information mining, what Escher’s moves are – he’s going all out for fusion technology, anti-matter. Kellog asks Alec to think the most nefarious possible use (Alec hasn’t clued in that Escher is not a nice man) and comes up with it being able to power the time machine.

Kellog tracks down Escher and says lots of stuff that basically amounts to “we’re both time travellers and you’re muscling in on my territory”. Escher is completely cold, though Kellog seems to hit a minor nerve when he suggests Escher has something to hide

Kellog, all nervous, turns to Sonya to, again, try to get her to turn her attentions to Escher. And Lucas reveals he thinks Kagame is alive – Sonya thinks Lucas has lost his mind (you think?) and is worried it could be linked to time travel.

Dillon’s spitting his dummy out because he doesn’t get to prosecute people without charges and Kiera’s pretty sure he’s starting to lose it (you mean he hasn’t already?) Kiera decides to go annoy Kellog to find Lucas and learns that Lucas is hallucinating – she’s already seen time travel can affect people like that – look at Jason.

And Kagame hallucination tells Lucas that he should be targeting the police. Cue Betty warning Carlos – Escher buying the police has just gone viral, making them look like private police. Which is… accurate. Dillon tells Carlos and Kiera they’re facing reviews of all their arrests and convictions. Kiera suggests come clean and blame lack of resources (showing how little she understands) Dillon counters that the public will claim he’s beholden to Escher – which Carlos already thinks.

While Jim plots to send Sonya and Travis to their various meetings, Alec shows Kiera his new toy – a way to fake Kagame’s voice and convince Lucas they’re his hallucination. They call him to arrange a meeting – and Kiera agrees with Emily that Arc is a major problem. Kiera wonders at the use of a programme that completely invalidates privacy – and in comes Kellog to claim they can use it to stop government control of what they see and hear (assuming Arc isn’t in the hands of those in power which is a big if). Kellog claims it could be a shortcut to the future but Kiera asks what future… the same one Alec warned himself about?

This is me very sedately doing backflips of joy as Kiera realises what a dystopia she was living in.

The police catch up with Lucas, he starts to reach for a  gun, but Kagame’s ghost tells him “not this way” (the, uh “real” ghost not Alec) and he gives himself up. There Kiera finds several pieces of the time travel device and Carlos pointedly turns his back so she can remove evidence without him seeing.

Sonya and Travis go to their meeting – which turns out to be with each other. Travis quickly disarms Sonya’s team. Travis points a gun at her, ready to kill her, she tells him to do it… and he kisses her. And she kisses him passionately back. Well before their rift they were lovers; this rather confuses the goons they both brought – but Sonya and Travis are now focused on Jim who tried to set them both up. Oh Jim, unlucky. They leave together.

At the police station, Betty has found footage from the cameras in Lucas’s van – half of the ghosts he was seeing were real – they were Julian. And Dillon’s plan is to ignore the public outrage about the police until it fades and something else distracts them. The corruption will continue.

With Emily, Alec takes ARC offline. He has one back up and Emily tells him he can’t just think of what he will do with his invention, but also what others will do with it. She offers to destroy it for him and he gives her the backup. She goes and uses a disposer – but we don’t actually see her destroy it.

Emily holds the drive she didn’t destroy and cries.

With Alec, Kiera puts the time machine back together with the new fragments, they turn it on.

This is watched on CCTV along with a lot of others by Escher who has vast, possibly Arc-like access.

Kiera still has a lot of problems and has absorbed a lot of messages from her future – but I love that she is beginning to realise her future was not the right way. That her future ISN’T one she wants to exist, that she wants to return to. We see it hitting her through the right she felt was violated – her privacy – and how vast that is. I just hope it opens the doors to a lot more.

I like Betty and Carlos’s deep discomfort with what has happened to the police – but Carlos in particular seems to have been rumbling over it for a long time without actually going anywhere with it. Maybe now Dillon’s plotting is crumbling (which I also love) we’ll see a difference.

I just really like how both the nightmare future and the actions of the present – including Alec’s invasive hacking, are now being put under the microscope this season has done an excellent job of throwing a whole lot of grey into Kiera’s rigid world.