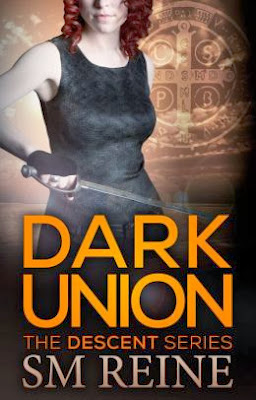 Elise and Anthony are still reeling from the events that shook their lives and the loss of Betty. They’re barely getting by, Anthony having lost almost as much as Elise and Elise crawling into a bottle and refusing to listen to anyone – especially people in need.

Until an old Kopis contact, Lucas, contacts her – and he’s a man she owes and trusts and cannot say no to. He needs her and Anthony to pretend to be him and his wife to represent his territory. It’s time for a 50 year meeting of Angels and Demons to get together and squabble with the Kopides standing guard – and Lucas’s wife Letitia is heavily pregnant and he can’t be there. If he doesn’t attend the Union, a new organisation, will take over.

When Elise turns up, however, she finds that Lucas has heavily edited events and finds herself in the middle of a murder investigation.

Unfortunately, this book is a low be for me in a series I really like. I try to tell myself it’s a bridging book, one leading us from the original storyline to the whole new place where the series is clearly going and to a degree I can see that – but equally I can see the book as pretty unnecessary.

A lot of dramatic things happened at the end of the last book, some grand revelations about Elise herself, some major expositions of her vast, shiny power and some wandering around heavenly realms. It felt, in many ways, like the end of an era and definitely the start of a whole new chapter in Elise’s life.

Except the last book also brought us the death of Betty, which, coupled with James’s absence (and a rift between James and Elise) means we only have 2 main characters in this book – Elise and Anthony who are both grieving. And by “grieving” I mean angry and surly and non-communicative and inclined to be drunk and snarling at just about everything and anything. Elise’s general kick arse attitude

It’s not fun. Even if they have a reason for the behaviour it’s still not endearing or particularly interesting. Elise being in silent mode also means a lot of things aren’t developed – we know she has parental issues and have a rough idea why but it’s not explored. She doesn’t want anyone else in Reno  but I’m not entirely sure why and she doesn’t particularly want to tell the Kopis world that she’s still around but I’m not entirely sure why. Ok, note the “entirely” there, because I’m pretty sure I know why by extrapolating on her character but she’s a brick wall of surly grumpiness and it’s hard to get a connection to her. I also, to be honest, completely forgot that she and Anthony were dating because they were completely and utterly non-couplish this entire book. I would say they barely tolerated each other but even that may be a bit of a stretch

The story itself introduces some new elements – like the Union of Kopides and Aspides trying to enforce their will across North America and some more weight about what the Kopides do and the nature of just exactly what happened in the last book. We have some ominous foreshadowing from a prophet but it didn’t really add anything that wasn’t already suspected because it was classic prophetic vagueness. I did like the angels and demons siding with Elise and not having much to do with the Union and I equally liked her confrontation with the successor to her title.

But all of them seemed a little tangential to the main plot or, perhaps, the plot was tangential to the actual elements and world. The whole find-the-murderer wasn’t really relevant to much of anything, I found, and was so removed from Elise herself that I wondered why I should care – or Elise, given how uncaring she started the book.

Inclusionwise we have Anthony as Latino and the prophet, Benjamin is Black. But he’s a slave to the union, controlled by a collar to use his visions for their purpose – without which he would succumb to seizures. At the same time the sheer wrongness of this is called out. The world’s greatest Kopis is an Indonesian man who looks like an intriguing character in his own right.

Elise is Intersex – she is infertile. That’s pretty much the entirety of what being intersex means to her. There are no GBLT characters

I think this book would have been a good beginning for a longer book – maybe pared down or just elements of it taken out. It could have been a reminder of what happened, an opening reveal of their attitudes and opinions in the aftermath and an introduction to both the Union and the next big issue (guarding the forbidden realm) while still having room for character growth and development and a story that is more relevant to the characters. That would have been a better bridge – this introduced new concepts but also left me too irritated by everyone to care over much.

My hope is, with the ending of the book, Elise is beginning to thaw a little and not be so difficult to relate to as a character – and we’re going to see her take a more active role in running Reno with some big things foreshadowed for the future. I didn’t like the books but there are still plenty of hooks there to draw me in.