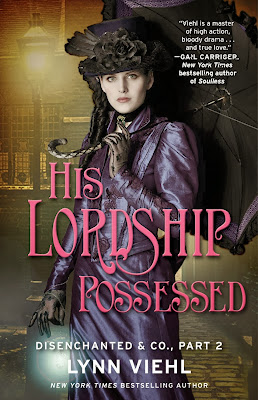 Kit is on the run – she doesn’t know who her enemy is, Lord Dredmore or Lord Walsh, nor does she know exactly why both of them are pursuing her so passionately, but she hides as more and more of her life is attacked and destroyed.

But as she tries to hold the pieces together, she learns of the true threat not just against her, but against the whole city. Ancient, immortal beings released from long captivity and split into factions at war – and one of those factions is coming to the city and determined to reduce everyone to little more than mindless slaves

And Lord Dredmore is deeply involved in the whole conflict

The world building of this world continues in the same style as the first book – in that it is rich and confusing. The world is huge. I strongly suspect the author has a huge stash of notes, alternate histories, magical rules and a vast amount of detailed work to really produce this alternate world. And it is fascinating – not just what was grasped from the first book – the alternate history, an America that lost the Revolutionary War, the magic that is so prevalent, the class system and its added bigotries against the Native Americans and women, but also in its expansion with the introduction of the Tillers and the Reapers and the whole Aramanthan thing.

But it was confused. A lot of this information was introduced extremely quickly, with little chance to truly assimilate it or digest it. Many times I had to flip back to try and catch up and sometimes I just plunged on not understanding and hoping things would become clear. I was lost several times, I had to work to keep up others.

I know some readers have also had problems with the language use – and there is a glossary at the back of the book. I didn’t – but then most of the language use are variations of anglicised slang, so, being English, it’s probably less of a problem for me.

I feel the story, because of this, rather lurched out of control. It started strongly, Kit running around trying to hold her life together as her enemies try to destroy her. She faces the law, she faces vandalism, she faces murder attempts and she continues to rise above and try to not just survive but survive on her own terms. Including the line:

As she rejects any suggestion that she leave the city and hide.

It’s action packed, it’s edge-of-your seat reading and we have so many diving questions pulling us in.

And then we get the answers and it’s like one great big brick wall of confusion laid across the tracks of the story and I’m laid in the wreckage of the train that was the plot trying to figure out where we’re going and why (that metaphor fell apart along the way).

Suddenly there’s possessed soldiers and magic stones and children with magical powers and Kit’s grandfather’s involved and there’s more possession and an invading army and secret societies and special powers which are super magic but completely separate from magic… I think?

The story continued as well as it could – we had action, we had Kit still directing her own life. We had Kit determined to save the city and Dredmore and being pretty cunning with it – but it was built on the shaky foundation of the very confusing world building. Well written, even well executed – but a great story can only go so far when the reader is confused and doubling back.

And the ending. On the one hand it was very satisfying – a good victory that was full of triumph and resolution and well worth cheering and being happy about. On the other hand, it came about because of a sudden magical bauble that did super-special stuff – none of it hinted at before, none of it fought for, none of it due to any actions on the part of the characters. It’s like reading a book that spends 300 pages depicting a character fighting desperately to find their way into a house, only to find the key in their pocket on page 290. It felt like a Deus Ex without the deity.

The society presented is very clearly labelled as misogynist. In many ways, Kit challenges this by merely existing as a woman who breaks all of the rules and by being openly scornful of the prejudice against women and the way it is used to force women to become property and even sex slaves. As part of that, we have an equal challenge of prejudice against prostitutes and the hypocritical double standard around sexual women and sexual men – all of which is fiercely challenged extremely well in this highly misogynist culture.

We also have Kit taking advantage of the misogynistic belief that, as a woman, she must be weak, feeble, delicate and foolish (always with biting sarcasm) which helps emphasise just how ridiculous the beliefs are because they fit Kit so poorly.

The one shaky side to this is that Kit herself seems to regard herself as an “exceptional woman”. Often regarding women collectively with faint derision – but this is partially understandable since Kit is a product of her own society, especially since it is subverted by Kit’s best friends and, pretty much, every woman in the story. Also a lot of it may be sarcasm. There’s a whole lot of glorious sarcasm.

We do not have any challenge of the massive problem of “dubious consent” in the last book. Kit is certainly bitter and angry from the experience – but though she’s angry at Dredmore, she’s also angry at herself and it’s more regrets and how she should have realised what a dastardly fiend he was, rather than outrage over the being kidnapped, chased down and stripped in the maze.  And Dredmore quickly returns as Kit’s love interest.

What we do have are more attempts to remove Kit’s agency (because she’s a helpless lady) failed and even be turned against the wielder (one excellent moment with drugged tea, for example) as Kit aggressively rejects even well-meaning attempts to control her “for her own good.” And the book ends, admittedly rather randomly, with Kit firmly in charge – leading Dredmore, Walsh and everyone else around as she solved the problems and created the solution (even if it did arise from a rather bizarre Deux Ex). If anyone could be said to be as strong as Kit in that moment, then it was Lady Walsh who rose to the occasion – which was extra satisfying because she so epitomised those “weak” women that Kit seemed to hold with a level of contempt.

Unfortunately, for all the excellent portrayal of women, class and sex workers, there were no POC and no GBLT people in this book.

In the end, I have to come down on the lower end of the scale both for the love interest’s unchallenged arseholery, the weak ending and, above all, that shaky world building. Because that’s a foundation on which the whole book is built – and it doesn’t matter how amazing the story you build on top of that is, it’s still going to crumble and fall.