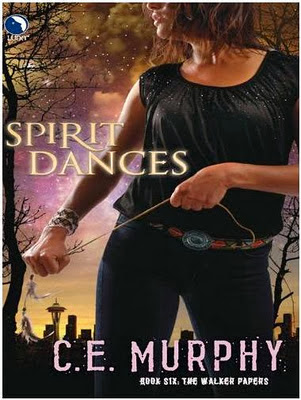 Joanne is getting used to her Shaman powers and taking the lead more and more – though she still has plenty to learn and some surprising ambushes, especially on when her “warrior path” will or will not permit violence. Usually not.

Her plate is full this book – a domestic violence case that puts her in a very conflicted position, a Native American dance troop being preyed on metaphysically, her boss becoming a wolf and a series of dead and missing homeless people all vie for her attention. And at least some of it is linked to the dark thing that has been stirring in the books for so long.

And on top of that, her relationship with Morrison finally breaks that barrier – after so much denial and awkwardness, who knows where it will lead?

I found the plot interesting in a different way than I usually find the plot of this series interesting – they’re always fun detective stories with lots of magic and interesting twists that always end with a surprise – always. Not that all of that didn’t apply here – we had an excellent detective story that was immense fun – and an ending that was completely unexpected. I can’t really comment more beyond lots of positive there, the plot was fun, interesting, character driven and with a twist end – classic Walker Papers really. If you liked the plots of the previous books, you’ll like this one

No, the difference was the amount of things that were brought in from the past – like Cyrano and Rita and Thunderbird Falls – into this book. Previously, each book had felt at least semi-standalone, this book was still fairly stand alone but had a lot more connections to previous events in the series. In addition, the plot was much more directly related to the lurking big bad. I feel the series is shifting more towards the meta, I am intrigued

Early in the series I had a problem with the metaphysical descriptions completely overwhelming the plot and leaving me lost confused and with a pretty massive headache. That’s nearly entirely gone – but there are still moments of confusion, especially when the metaphysical is involved in one of the fight or action scenes. There are moments towards the end of the book, at the wickerman, where I became rather hopelessly lost in magic and memory and completely lost track of the actual fight that was happening.

I think more than the plot, the main strength of this book is Joanne’s character development. She is reaching a new plateau in her power, settling into her role and into her relationships – both with her friends and finally, oh finally, with Morrison. They are just so awfully awkward and clumsy and fumbling together that they just had to get together. It has been on the cards for so long now and it’s excellent to see them finally pass that barrier. Even if the book didn’t have Gary in it.

One of the elements I love about this series is how Joanna has evolved as a character. I’ve complained before how Joanne seems to spend a lot of her time desperately trying to fix the messes she has made. And yes, she makes mistakes in this book and they cost her, she also acknowledges the mistakes she’s made. But she also has an epic scene where she stares down Coyote – big Coyote not Cyrano - and makes it clear if he doesn’t like the job she’s doing he can take the power off her and have done with it because she’s doing the best she can with the limited experience and knowledge at her disposal.

I love that – she’s not denying responsibility or shirking her task or trying to escape the consequences of her actions. But she is refusing to collapse with guilt because she makes mistakes, especially given how little she knows. She both gives herself permission to make mistakes and draws a line before the powers that be about how guilty she is going to feel and refusing to beat herself up – or accept criticism she deems unfair. Joanne’s growing confidence both as a shaman and as someone who is doing good in the world is wonderful to watch (especially when surrounded by people who are far more believing than she ever was).

But there’s also the counter message to the pride. She cannot act alone all the time – and the rituals of healing she invokes are supposed to be enacted as a group. We see the consequences when she acts alone and the benefits when she works with other practitioners as well as seeing the power of people like Billy and Melinda. Joanne isn’t in it alone - even her most intimate magic is reliant on her spirit guides.

Her confidence has also changed her as a leader and in making tough decisions – decisions even Billy doesn’t always agree with, but we can’t argue are the wrong ones. She has grown really well into her role

Joanne is a mixed-race protagonist – and for many books that generally means the mixed-race element is used as an excuse for the woo-woo (because brown people have woo-woo, it is known) and maybe one, subtle, “exotic” feature (like black hair). Joanne’s being half Native American is very much a part of her however, and not just woo-woo, there’s a lot of inclusion of Native American beliefs, her past and conflicts stemming from that. She’s certainly one of the better – perhaps even the best – representations I have seen.

The homeless were a strong element in this story and they’re handled really well. Not demonised, but not pitied and patronised either. Rita is capable, the homeless people she recruits are similarly so. They’re not helpless, they’re not useless and they’re not bizarre freak shows as we so often see presented. They are in desperate circumstances and that is shown starkly – but not in a way that reduces them as people.

There are a number of POC, especially Native Americans including Joanne herself, Melinda and the Dance Troop. All have a nice element of culture and tradition which they’re all deeply involved in without resorting to gross stereotyping that makes you want to cringe and look away from the book. It’s nice that Joanne isn’t the only one and that that sense of reality is very much present.

I thought that one of the characters may have been a lesbian, but that seemed to be contradicted later in the book – even if she were, it would have been a problematic portrayal. It’s a sad lack in the book.

It’s hard to write reviews for long series that just keep being consistently good in the same way you’ve come to expect. I feel sometimes like I’m writing “it was good, of course it was good, what do you expect?” over and over. Because it’s true – I went to this book excited and happy because I knew it was going to be excellent – and lo, I was right. It was.