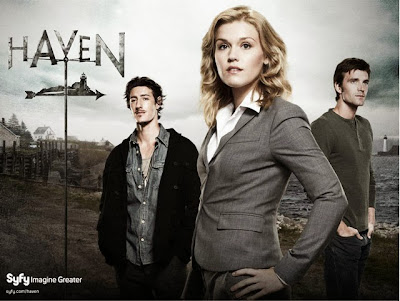 In the tunnels under Haven where a worker is checking on the wiring, something is moving in the water. Something with odd red-tinted vision – and something that jumps on the worker and splatters blood everywhere. Why it’s almost a Supernatural start to an episode.

On the surface, the Teagues bicker their way into Dwight’s office; Dwight has intercepted one of Nathan’s faxes. Someone thinks they’ve found Audrey – or, rather, her body. This instantly sets of a lot more bickering since Vince isn’t sure he can stop the Guard killing Nathan without Audrey (Dave objects ferociously and their bickering has to be stopped by Dwight, again).

Nathan, meanwhile, pokes Duke about poking Jennifer to refresh her memories about what she heard from the barn now she’s off her meds. Duke checks that but it’s more a lead in for slowly building not-quite-flirting between him and Jennifer and worries about Wade (who is apparently partying now his marriage is crumbling) and trying to get him out of town. And he has a minor panic when Jennifer accidentally cuts herself – since the blood of the Troubled sets off his own “kill-troubled-people-with-my-super-strength” Trouble.

And the Guard still don’t like Nathan, which is a surprise to no-one. But it’s time for this week’s Trouble and the poor guy who took a wrong turn from Supernatural’s opening credits. Apparently the guy was drained of blood without a cut on him – and he’s not the only one. Nathan is also being stalked by Jordan, presumably to stop anything killing him before Audrey gets the chance to do so (therefore ending the Troubles).

They do make the connection with the sewer lines so come up with a cover to convince people to stay away from them (is there really anyone in Haven not aware of the Troubles yet?). Except across town a woman taking a show has a similar blood splattery experience – so the threat is all drains or all water sources? When Nathan and Dwight arrive, there’s not a drop of blood to be found around the exsanguinated body, despite the splatter we saw. Even a luminol test shows nothing.

When Dwight tries to run Jordan off, they both see a large pool of blood oozing its way into a sewer grate.

Time to join the Teagues on their road trip with lots of bickering and they finally have the argument. Vince calls what Nathan did, destroying the barn, selfish. Dave thinks they have to look out for Nathan since they were friends with his father. We’re reminded that Vince loved Audrey (or a previous incarnation) and he let her go, unlike Nathan (it appears Vince and that past Audrey were very close) – and if the body they’re going to identify turns out to be Audrey’s then Vince is not going to be very happy with Nathan.

Back at the gull and Jennifer is trying to nap when the sounds of many people talking wake her – but the place is deserted except for Duke. She has the sudden thought that maybe she didn’t hear the barn – maybe she is just mentally ill.

Dwight, Nathan and Jordan have the fun conversation about 30+ pints of disembodied blood moving on its own, killing people and growing larger with every death –kind of like a vampiric Blob. Tracing the path the blood followed, they link it to Mike Gallagher, a member of the Guard who gave Nathan grief – and has a cut hand.

They go to see Mike who is not co-operative since the Guard told him the Troubles were going away. And because his wife died a week ago – cancer and stress from having to rebuild their home and continue to deal with the Troubles. When Nathan questions him about his Trouble he moves forward, grabbing Jordan’s arm – mistake, don’t touch Jordan the pain lady. He collapses unconscious and Dwight gets a call that the blood monster is still on the move – and heading towards the police station.

Which is where Duke and Jennifer go to find the place deserted (evacuated). Jennifer worries more about hearing voices (or the crowd from Lexi’s bar, rather) and actually being insane – when one of the police doing a last sweep of the office is noisily munched on by the blood monster. Seeing the nastiness, Duke and Jennifer back into the office and try to seal the door (that much blood and Duke’s trouble should be interesting).

The blood oozes through a light fitting – and some of it drips on Duke and is absorbed. He staggers back and his eyes turn silver – the evil Trouble killing silver. Jennifer runs out and babbles to the newly arrived Dwight, Nathan and Jordan - and Duke, his silver-eyes under control, follows. The blood hasn’t hurt him because of his power. Time for Jennifer to learn about Duke’s Trouble – sadly it’s Jordan who tells her “he’s an evil sponge for Trouble blood”. Accurate, incomplete, but accurate.

And blood starts oozing from the electric sockets (the electric sockets? Really? How? Why?). Personally I’d push Duke into it, go run out the back door and hide until he comes off his silver-eyed high and call it job done. The blood, however, seems focused on Nathan (as Jennifer points out, everything is mad at Nathan). Mike wakes up and protests that he doesn’t want Nathan dead, or anyone dead – his Trouble activated when his wife died and, no, he can’t stop it. Jordan drives it off by trying to touch it with her bare hands –it scatters and backs off to avoid her touch; but it just reforms.

Interlude for the Teagues who are ready to identify the body that is thought to be Audrey’s. And Vince is having trouble dealing with Audrey being possibly dead – it gives him an insight into what Nathan went through watching Audrey enter the barn.

Back to Haven police station and they reach my idea - step forward the Evil Sponge! Duke puts his hand in the blood and absorbs all of it (why isn’t everyone running?). Because they didn’t run, Duke gets his silver eyes and then lifts Dwight by the throat – one handed. Told you they should have run. It doesn’t last long and they manage to talk Duke into letting him go as Duke collapses to the floor. His eyes return to normal and they leave him in the care of Jennifer. Duke opens up to her about his Trouble, particularly how it doesn’t hurt it, disturbingly, feels amazing. He talks about how it ripped apart his father and grandfather – and why he needs Wade out of Haven.

Nathan thanks Jordan for saving him with her power and she slams home why she needs him to end the Troubles – she can’t touch anything and she was almost sorry the blood pool didn’t kill her. She can’t live with her Trouble.

Back to the Teagues and Vince is still putting off the reveal – asking to see her left foot first since Audrey had a scar there. The mortician shows the foot – and there’s no scar. Vince tearfully rejoices. It isn’t Audrey

The Teagues return to Haven and Vince talks to Mike. Mike knew nothing about his Trouble only that his blood would go after the person he hates the most – and he had no idea he hated Nathan that much (hey, maybe he’s a nice guy and just likes everyone else?). Dave puts in he’s just putting his pain over his wife’s death on Nathan and Vince calls for a fresh start. They need a new Haven without grudges and hatred. This reconciles Vince and Dave as well – as Vince admits that, despite his mistakes, Nathan’s their only hope.

At Audrey’s bar, “Lexi” has a gun pointed at William again and demands to know who she’s supposed to be. He adds some more cryptic about “where she is” but he can’t tell her because she’s just not ready. Lexi has as much patience for that as I would and uses the gun to frogmarch him to the door. But once she kicks him out and returns to the bar, she turns round and William has magically re-appeared on his bar stool.

Ok shenanigans are going on, or he has the Trouble of magically teleporting to closest source of alcohol. This would be an awesome awesome Trouble.

William tells Lexi that not only is she not really Lexi – but the whole bar is fake as well. Lexi is growing rather impatient of the random cryptic statements. She leaves, taking a bottle of tequila with her, says goodbye to her colleague, Rhonda… and the minute she leaves the building she comes back in to Rhonda greeting her with a “goodmorning”, despite Lexi protesting she just left.

She confronts William and asks if she’s dead… afterlife to spend eternity in a bar? There are worse fates. William, however, confirms she’s still alive. But the bar and the people in it are not real. Lexi takes a moment then says she believes him.

And everyone disappears. Zomg, they’re fairies – start clapping! (C’mon you all got the reference don’t tell me you didn’t). Except Rhonda. She stays – Lexi takes that to mean Rhonda is real but William says no – it’s harder for Lexi to accept that Rhonda isn’t real because she’s formed a friendship with her, she’s not ready to let her go.

Lexi turns to Rhonda and makes her goodbyes – and Rhonda fades away. William tells Lexi she’s next.

Back to Haven, to the Gull where Duke and Dwight have a moment and Wade shows up. Awkward conversation delayed by Jennifer arriving with a revelation she needs to tell Duke and Nathan – Audrey’s voice talking about being trapped in a place that wasn’t real. They realise she may still be caught in the barn – that may still be imploding

In said barn, William tells Lexi she called the place “the barn.” And it’s dying – and will take her with it if they don’t move quickly. And to his vision parts of the barn are dissolving in red light

I’m kind of stumped for commentary at the moment. The stories and Troubles work, but I feel that the whole show is in something of a holding pattern until Audrey is actually released from the Barn. As I said last week, I still have a whole load of questions and curiosities (especially the Teagues) and we’re waiting for some of that to come to fruition.

Intrigued, curious, but still kind of stuck in the prologue.