The Devil You Know (Demon Legacy Series #1) by J.M. Gregoire 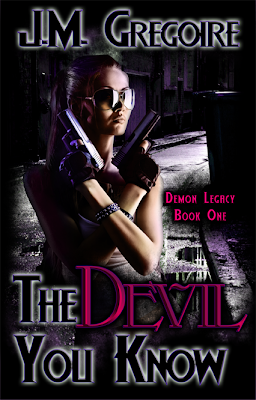 Mike and Dez, vampire and half-demon, are just pursuing a relationship together after a long period of friendship; confronting the fear that everything may irrevocably change between them.

But a far greater fear is stalking the world – a demon has managed to breach the barrier between worlds and seeks the stone that will allow him to open the doors wide and bring his forces across the great divide. Mike and Dez, joined by Mike’s heart broken brother, Lucas and backed by the council of witch and vampire covens race to catch the demon and stop him before it’s too late.

First of all, this book is a short story/novella start to a new series and, I have to say, I don’t think that’s a good idea.

The first book in a series is your hook, your bait. It’s the tasty morsel of joy you hang in front of me that lures me into the series and makes me look for book 2. It has to drag me in, it has to get me invested in the series and want to see the story continue.

Which means it has to develop some decent characters. It has to showcase a brand new world. It has to show off your writing style to the best possible extent. It has to establish a story, both interesting enough to make this book good and with sufficient points left open to make the next book necessary so I have a reason to stay with the series

All of that is a tall order in a full length book. In a novella it’s nearly impossible.

And I don’t think this book really achieved any of these.

The world has vampire, witches and demons. The witches and vampires are organised into covens and the demons want to do bad things because, well, they’re demons, it’s what they do. And that’s kind of it. I don’t know the why of anything, how these things interacts, how the magic works – I know there was a war deep back in history but that’s about it. I don’t even know how old the principle characters are beyond “very”. The world is hollow, the world is generic, the organisations that make up the world – the covens, the record keeper, the guardians – they’re all just words. This becomes especially glaring when the guardians seem to be utterly incapable of actually guarding anything.

The characters – well the most developed characters two me were introduced in the prologue, their personality, their relationship, their feelings are more real than anyone else’s – and they become pretty irrelevant once the prologue is done.

The main characters, Deziree and Michael feel much more shallow. Michael has one element – attraction to Dez. In fact, their whole romance is an unnecessary distraction, in this short book, from the actual end-of-the-world plot that is supposed to be their main attention. Michael feels almost… distracted by the end of the world. Especially since that’s pretty much all we have on Michael – he’s a mercenary (totally unexplained what that means and who for) who was called in for REASONS and he loves Dez, that’s it

And NONE of them are developed. How could they be? The book is far too short to deal with what could easily be 3 or 4 books worth of inspiration. The romance just smoothes out – except the ending where Dez does something that I don’t even remotely understand. She is deeply betrayed, but so little is made of the connection – or Dez’s emotional investment – that it’s a complete non-issue. She fears becoming evil and then the issue goes away. She has issues and they disappear – they never get actually developed or resolved satisfactorily.

Then there’s the story – we demon grabbed the Macguffin and now must be stopped before bad things happen. It’s clumsy, it’s linear and it’s dull. The demons just leap frogs from guardian to guardian – these guardians that do absolutely nothing and are completely undeserving of their title (one of them actually writes a note saying “something is coming for me” in ominous tones. Seriously, the guardian’s reaction to his psychic power picking up a looming threat is to write HIMSELF a note. Did he think he’d forget? Or did he worry that his death scene wouldn’t look sufficiently ominous?), while Mike and Dez follow with the conveniently appearing power for Dez. Side issues are, as mentioned, completely undeveloped. The ending involving Lucas was bleeding obvious from about half way through the book. And confronting the big bad involved such a convoluted confession I checked the book to make sure Agatha Christie’s ghost wasn’t writing it. Unless your protagonist talks about their little grey cells, there’s no excuse for confronting the bad guy with flimsy, to no evidence and then having a dramatic villainous confession just info-dumped on us. And the only reason they confront the big bad is that they decide there’s a traitor in their midst because… because… actually I have no idea.

There was no twists, no action, no development and the story was just an elaborate game of follow the leader.

And the writing? It’s stilted, we have a lot of very abrupt staccato sentences, lots of short sharp lines. Maybe it’s me being the utter abuser of the run on sentence but it feels choppy – often with unnecessary detail squeezed in (like the engine seize of Michael’s Aston Martin. Things like:

“The night club was packed. The main parking lot was full and there was a line out the door. Luckily, the place was trendy enough that they had valet service. “

“Thinking of their date inspired happiness in him.”

Oooookay, that actually feels like an English-as-a-second language problem, but I don’t think it is.

Top this off with zero diversity, no minorities at all and no character is developed enough for me to comment on “strong” female characters either – except to say we have a thread of rape running through the book

And in the end what hooks am I left with? The story ended. The demon was defeated, the bad guy caught. Dez has a case of angst that I’m sure she’ll get over… so what now? There’s no open end, there’s no unresolved issues, there’s no reason for me to pick up book 2 – because it all ended.

All in all, not the best book I’ve read, I have to say.