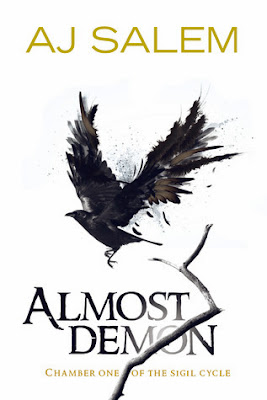 Gemma has finally returned to school after the accident – the accident in which her twin brother and her two best friends died. The accident that half the town and most of the school blames on her.

That’s a lot to deal with. Thankfully she has some distractions with an after-school book club that comes with lessons on how to summon demons

But summoning demons isn’t a mere amusement – with people of the town being possessed by the shadowy Dybbuk in greater and greater numbers, Gem’s ability to summon angels and demons may be the only thing to save them all.

All of that is excellent. It’s fascinating. It’s intriguing. It has elements I have rarely seen in any other book. It has an amazing foundation. I could love this book. I could love this series. It could very easily be one of my favourites. I love the idea of summoning angels and demons and the tattoos they leave behind. I love the idea of channelling their powers and creating debts and favours and working to discover exactly which angel or demon you need for each job. I really like the way that the demons and angels are portrayed – human but not with lots of edges.

The descriptions, especially of the alien realms, are really vivid and powerful. Gem herself is well described and characterised and makes for a solid protagonist

The idea behind the story is truly excellent and one I really enjoyed. The demonic plotting and Gem’s slow learning as more and more of the supernatural is revealed to her, the Dybbuk, lost souls possessing people and slowly consuming the entire town adds a perfectly created sense of urgency that really drives the plot and the decisions. Their actions both make the story very personal as people Gem loves are affected while also being almost apocalyptic in the damage it could unleash on the world, let alone the town.

But there were elements that I thought were completely unnecessary additions that served to confuse the story – such as the headmistress of the school being a witch. She added nothing to the story, she did very little, she achieved nothing but a distraction.

An integral element of this story is that everyone blames Gem for her brother and her best friends’ death. The reasoning behind this, even when explained, is convoluted and confusing to say the least and, again, it adds nothing to the story beyond a need to add an extra layer of angst on Gem. And having just lost her twin brother and 2 best friends, was there any need to up the ante on the angst dial? Instead it was a clumsy tool to create a clumsy Mean Girl whose purpose was pretty much limited to being a Mean Girl. We then got to see a large number of people persecuting a grieving girl who lost 3 people she loved for those people’s deaths – it was unnecessary, pretty difficult to believe (how many people would think attacking her in this manner was remotely acceptable – let alone a majority?) and it just didn’t add one single relevant note to the story.

These distractions are particularly irritating because they do consume a large amount of the story, but they also emphasise how much is undeveloped and unexplained. For example, her father’s behaviour needs clarifying. Was he always abusive or is it possession that has driven him to become so? Gem’s point of view doesn’t make it clear – especially with her expectation and near courting of abuse over her brother’s death and makes it very hard to characterise her relationship with her father. Similarly, Charlotte, her best friend, was sorely in need of development beyond being the supporting best friend (before The Confusion happens).

That same level of attention was really needed in expanding and explaining the world building. Gem is an astonishingly uncurious person. Her classmate, Ian, pulls out some major woo-woo and she… accepts it. Even when he eventually tells him roughly what he did, she doesn’t ask how he can do it, who those people are, what they can do, who or what Ian is – it’s all left in doubt.

Similarly with Mr. Flynn, he pulls out a grimoire and starts teaching her woo-woo. But she never questions how he knows it, why she’s so special, who Mr. Flynn is or much of anything else. Nor is anyone particularly forthcoming with information to explain any of this. There’s no exploration of exactly what angels and demons are, what else is out there, what they mean theologically and mystically, what they can do – what she can do – and how and why. There’s no explanation. Which all becomes a problem in The Confusion

And The Confusion needs those capitals. Because when all this foreshadowing comes to a conclusion everything happens. We have people changing sides and changing sides and changing sides again. We have angels and demons and things that are neither. We have Gem finding lost of shiny power and suddenly knowing how to use it with abstract descriptions of realms that barely make sense. We have a sacrifice – and Gem being surprisingly ok with sacrificing people – and second sight and Dybbuks possessing people and shadowy cages and demon chambers and blind people who can see and untapped power and WHOA NELLY someone put the brakes on this thing!

With so little explanation in the lead up to this sudden surge of action, it was hard to follow. It was made worse by the characters seeming to just move from place to place with little transition – they’re in the school, now they’re home, now they’re in the woods. It could be trying to get a sense of just how confusing and out of control things are, but Gem doesn’t seem to be confused. In fact, Gem’s sudden understanding without much explanation makes things more confusing because she’s now using magic and making plans based on things I can barely grasp. This in turn isn’t helped by Gemma’s odd decision making – like feeding on people’s souls and objecting to sacrificing a particular person, rather than human sacrifice in general; it just comes together in a confusing mess I don’t even try to follow.

This book also has no diversity despite a decent sized cast. The one POC is dead before the book begins. The only mention of GBLT people is schoolyard bullying – where “dyke” is used as an insult. There are a number of women but I don’t think any of them are especially strong characterisations and there’s a fair bit of slut shaming and attacking in the book

This book has a great world and some great characterisations. The concept behind it is sound, the idea for the story is really pretty original and fascinating – but the execution is sorely lacking and needed a much stronger balance between world building and action. Putting so much at the end of the book with so little foundation leaves it floundering and confused. Great potential, sadly unrealised/