Once Upon a Time: The Treatment of Regina 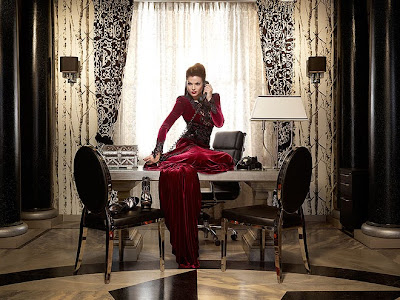 After 3 seasons of Once Upon a Time Regina has emerged as one of the more complex and fascinating characters in the show. Frequent antagonist and scourge of the protagonists, the Evil Queen is now the purported ally of the main cast and still seeks to be part of her son’s life.


But Regina’s characterisation is extremely spotty to say the least. Her treatment by the rest of the characters, her often bemusing actions and her endless falling off the “redemption wagon” all combine, rather dubiously, to uphold one thing: This powerful, interesting, complex woman must never be the equal of Emma and Mary Margaret, the showrunners.
Once Upon a Time is determined to ensure that Regina is beneath Emma and, especially, Mary Margaret – their paragon of precious, pure, wonderful white womanhood. Regina rips out hearts left right and centre, Mary Margaret has to take to her bed for several days because she kills Cora in self-defence. Mary Margaret has a super special glowing, pure heart that is stained – STAINED – by her sullying herself with unseemly self-defence. Regina’s heart is, as she herself says, cold and dark and hard. The contrast is glaring – and we absolutely cannot ignore the fact that Mary Margaret is White and Regina is a Woman of Colour and the history of putting White women on a pure, precious (and restrictive) pedestal of good womanhood while Women of Colour are continually cast as the ultimate Unwoman.
Once Upon a Time is driven to keep Regina as the eternally grovelling villain who constantly has to beg for Mary Margaret and Emma’s forgiveness or the guilty villain tearfully facing the evils of her past which are thrown at her again and again – and Lana Parrilla certainly acts these scenes excellently. But to maintain this, the writers have, at best, taken liberties with her characterisation and, at worst, completely retconned her and had her do things that not only didn’t make sense for the character – but don’t make sense for anyone with anything close to an ounce of common sense.
It is ridiculous to believe that Regina would think Henry, the boy willing to destroy the town’s magic to keep his family together, would accept her plan to kill the entire town
It is ridiculous to believe that Regina would think of herself as a kind, benevolent ruler and Mary Margaret a villain when Regina is massacring entire villages.
To justify the treatment of Regina, the lesser status of Regina, the writers have her do things that make no sense – a believable narrative  and consistent character development are less important than making Regina evil and making Mary Margaret the extra, super-pure wonderful woman who is so saintly she is willing to forgive even the evil Regina.
In addition, that evil itself is sorely lacking in anything resembling analysis or nuance – nuance the show itself has included in Regina’s backstory but then constantly fails to reference in her “redemption.” Regina was not born evil, Regina was driven to her actions through manipulation, through the cruelty of her mother and through the losses and tragedies she’s suffered as well as an urge to defend her family. But while Regina is constantly demanded to redeem herself, this is always through attacks and shaming without any acknowledgement of what she has gone through. The whole “redemption” of Regina doesn’t exist to actually redeem the character, but for the cast to line up and take it in turns calling her out or outright abuse her. Just as her evil actions often make no sense, and exist only to give the “good guys” more ammunition to throw at her.


This is made especially glaring in Season 3, Episode 3, Quite a Common Fairy, with Tinkerbell joining the vast crowd of people queuing to castigate Regina. And what did Regina do to Tinkerbell? Not fall in love. Not be ready to get over her issues and start a relationship with a complete stranger. She “selfishly” didn’t manage to heal from a lifetime of tragedy and a traumatic upbringing because Tinkerbell had suddenly decided - unasked! - that she was going to “fix” Regina. Whether Regina is ready for a relationship, whether she has wounds that need to heal first, whether she has major personal issues to deal with - all of this is irrelevant. Tinkerbell has decided that True Love must happen - and Regina has “ruined” Tinkerbell and Robin’s life by, basically, not living her life as Tinkerbell has decided she should and not being able to overcome all her issues over night. Who needs therapy? Tinkerbell demands you get over that stuff!


This is the most glaring example but it is really a stand in for everyone’s attitudes towards Regina since the first episode. Despite everything she’s been through, people demand she just change and always on their terms regardless of what legitimate claims, grievances or problems Regina may have.
And nowhere is that clearer than with Henry. Emma gave Henry up for adoption as soon as he was born. Regina adopted him, legally and, as she put it, raised him, fed him, clothed him, soothed when he was ill, held him when he was sad and loved him. By law, by experience, by any reasonable measure, Regina is Henry’s mother. She’s not a perfect mother but, then, nor is Emma. But Emma comes in and by the power of her DNA (and being the White protagonist) she becomes the true mother, the real mother. Regina’s motherhood is repeatedly denied by cast members, chipped away until we get to season 2 where Henry is not even living with Regina and she’s having to beg Mary Margaret and David for permission to be with her own son. We enter season 3 and the transformation is complete - Emma’s super-special status is that of “the mother”. Regina is firmly stamped as secondary.


I could write an entire piece on how deeply problematic the portrayal of Regina’s motherhood is on Once Upon a Time (and probably will) but it ultimately comes down to casting Regina as secondary, as lesser to Emma and Mary Margaret. Again.
This drive to maintain Emma and Mary Margaret as the central characters becomes even more glaring in these early episodes of season 3. Now Regina is, ostensibly, an ally of Emma and Mary Margaret the writers have a problem – Regina is powerful. Regina has magic. Regina can do things that render Mary Margaret and Emma little more than side-kicks. But from the moment Hook’s ship arrived at Neverland the writers have taken convoluted pains to render her magic useless. From moral judgements from Mary Margaret and Emma (for reasons unknown), to Regina’s suddenly clumsy need to use it as a hammer through to fear of Pan’s power (but not so much fear as to not seek out Tinkerbell’s magic).


The show is determined to keep Regina beneath Mary Margaret and Emma – whether morally, through relationship to Henry, or simply in story prominence, even when doing so can only happen by the writers twisting themselves in knots to make it so.
Much of the treatment of Regina is rather shallowly justified by the fact she’s a “villain” but that hardly stands up to careful scrutiny. Contrast the treatment of Regina with the treatment of Gold/Rumplestiltskin/The Dark One, the other “redeemed” villain of Once Upon a Time.
Gold is responsible for a considerable amount of pain and suffering in the world. He held Belle prisoner as payment for his help. He has beaten several men sometimes just out of temper or for his own amusement. In fact, when Belle had her Lacey phase he positively revelled the violence he dished out. A large section of the cast is terrified of Gold and for very good reason.
In fact, Gold carries some responsibility for Regina and Cora’s own evil. Gold, with his ability to see the future, manipulated all of the events leading up to the end of season 2 to try and find Baelfire/Neal. It was Gold who taught Cora to value power over love, it was Gold who taught Cora magic, including the signature ripping out of hearts. It was Gold who ensured those lessons were passed on to Regina, Gold who ensured that Regina also learned dark magic. It was Gold who manipulated King George’s Kingdom so David would become Prince Charming and it was Gold who then offered his spells and help to Snow White and Prince Charming so that they could prevail against her.
The conflict of Once Upon a Time isn’t a battle between Regina and Emma or Emma and Cora – it is one, very complicated game of solitaire played by Gold to reach his son.
Even the motivations of Gold and Regina are very similar once Regina focuses on Henry. Both of them love their sons, both of them wish to be with their sons and remain with their sons. But at no point, for all his misdeeds and absences, is Gold’s fatherhood of Neal ever questioned in the same way that Regina’s motherhood of Henry is constantly challenged. In fact, Gold is accepted and embraced as Henry’s grandfather without any tests to show himself worthy, without any moral tests and without any grovelling (this in turn also feeds into Once Upon a Time’s terrible treatment of adoption which we will cover in another post).
Gold’s path to redemption was always a short one simply because from the beginning he has never been cast as evil on par with Regina. Even his worst actions are cast in a far more positive light and he is hardly ever condemned by the other cast to anything like the extent of Regina. His looking for Neal has always been presented as a justification for his actions – an excuse that has constantly been denied Regina.
Gold’s redemption is also starkly different. Regina gets judgement and condemnation and is required to earn the forgiveness of Mary Margaret and Emma in order to be considered a suitable mother for her own child. Gold gets Belle, a supportive, loving partner who constantly sees the good in him no matter what he does, encouraging him, having faith in him, guiding him towards goodness. The contrast is glaring.


Once Upon a Time has a character with awesome potential in Regina - but the show is vehemently determined to keep her lesser to Emma and Mary Margaret. So determined that plot, character development and the basic definition of motherhood are all cast aside as anything will be twisted to keep Regina down. Broken motivations, randomly depowered magic, evil plots that no sensible person would adopt, a completely denied family - all of this is fair game so long as it ensures that Regina, a Woman of Colour (and one of the shows few and certainly the most prominent) is always beneath the pedestal on which Emma and Mary Margaret perch.
Posted by Sparky at 9:00 AM