Kiss the Night Goodbye (Nikki and Michael #4) by Keri Arthur 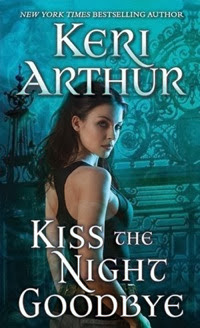 But she isn’t the one their enemies are focused on – it’s Michael and Selene, targets of an elaborate revenge plot from their distant past.

With Michael kidnapped, his memory heavily erased and him replaying the events of over a 100 years ago, only Nikki can enter this ghost town full of mind controlled hostages to try and save Michael and bring him back to himself

And stop a sorcerer from bringing one of the Circle’s worst enemies back to life.

I did have a lot of concern about this book rehashing a lot of what happened in Dancing with the Devil, since Michael has his magical amnesia, it sets us up perfectly to replay all those love at first sight tropes, all of Michael’s “but I can’t get close to anyone” clichés and the endless “but she’s so sexy I just can’t resist her” mental rambles that were annoying the first time round and no better going back to the same tropes with the same characters for another visit.

And I wasn’t wrong. We do spend a lot of the earlier part of book replaying these same tropes interspaced with lots of “zomg she’s so sexy” commentary. But it is only the earlier part of the book (and, yes, it was every bit as annoying as I imagined). We spend far more time with Nikki plotting to try and get Michael’s memory back and trying to defeat Dunleavy than she does on sex or even on how much she loves him. In fact, there was a shocking lack of angst considering the set up – I expected Nikki to be upset that Michael has forgotten her, to be sad, to lament that their future together is now over. But she doesn’t – she is confident in their victory, she is confident that Dunleavy’s magic can’t possibly permanently erase their love. She is confident in the strength of their relationship. She is confident in her own sexual attractiveness. She is confident in her abilities and their combined abilities.

Nikki is gloriously, refreshingly free from lots of doubt and self-recrimination and angst that I would so have expected from this set up. Her main concerns are less “how will I get Michael back” and more “how will I save all these people?”

Which follows for most of the book – it’s far more mission focused than any of the previous books in the series. Relationship issues have, in the past, completely overwhelmed the plot and distracted both Nikki and Michael to a horrendous extent (as I have complained about at length). With the amnesia and, more importantly, the long term relationship behind them both Nikki and Michael are free to focus on the mission at hand rather than their relationship issues.

This made the story a generally good read (once we’re past the initial problems and a rather excessive wordiness in the beginning). The plot is exciting, has plenty of action, lots of detective work and lots of brainstorming. Both characters think, both characters explore, both characters use intelligence and combat skills. They face many obstacles, they have to pick a delicate path to keep everyone alive and the difficulty of finding Dunleavy as well, all with the loss of Michael’s memory. It’s well written and a fun plot to read without it being constantly distracted


And I like how the amnesia was handled. Michael is a younger version of himself but bits of his memory bleeds through. I*t’s really well done – and not just solely focused on his relationship with Nikki, but also to how he thinks of himself, how he reacts, what he has learned in the hundred or so years since the events he’s now flashing back to. The spell degrades and his memory comes back in several pieces in a very gradual but very natural and understandable fashion – I really liked it.

There was also a lot less of Michael trying to protect Nikki and put her in a box for her own safety. From the very beginning we had Nikki finally joining the Circle and working together in the ghost town Nikki was a full partner. Ok, sometimes he worried about her and sometimes he did try to leave her behind, but it was considerably less than before and his worry was not excessively more than hers. Similarly, Nikki was active on her own, entered danger on her own and didn’t require Michael to rescue her – nor was she doing foolish things just to prove how strong she is.

Another element in the book I liked was how much Michael and Nikki cared about the civilians. The Circle, after all, was set up to protect good from the depredations of evil creatures – which means they should not be cavalier about the idea of collateral damage. Even with the townsfolk mind controlled to act against them, Nikki and Michael are both sympathetic, hating to hurt the people, taking pains (and injuries) to try and fight them without causing them too much harm – and feeling sympathy and sadness for what the townsfolk have to endure. The innocent victims felt like innocent victims – not red shirts or plot devices or random plot casualties. There are also a number of prostitutes or women forced to become prostitutes and Nikki notes the misogyny in how they are treated

On the negative side, there was one brief POC character in the beginning of the book. On the GBLT front – this book has problems. In fact, this series has problems. We finally have it revealed that Patrick, Michael’s long dead brother, was bisexual (yes, the GBLT character is revealed after he is dead when previously only his opposite sex relationships were mentioned). And he was coming to America to live in San Francisco.

In the 19th century. No, really – GBLT people = San Francisco throughout history

In addition to this dead man, the big bad is also presented as a bitter, perverse bisexual – I quote:

“wasn’t overly choosey about whom it had sex with. Male, female, near dead, dead… it didn’t really matter.”

Yeaaaah that’s all kinds of trope laden – especially when we consider the villain in Chasing the Shadows. There’s a stink of homophobia here.

My final negative is the ending – it seemed to happen rather abruptly and somewhat anti-climactically. In some ways this fits an ongoing interesting theme of the series – Michael and, to some extent, Nikki are usually more powerful than the enemies they are fighting. Their enemies have the upper hand not through raw power but through cunning and ruthlessness and preparation. It’s an interesting twist to see the intelligent crafty antagonist take on the more powerful protagonists. But it does mean when Michael and Nikki do finally reveal and corner their enemies, it ends quickly.

This book was a considerable step up from the ones before it for me. There are still some issues especially with inclusion and some elements of the story that weren’t sold to me – but it revealed a new facet to the series that I really enjoyed – it shows what the series could be.