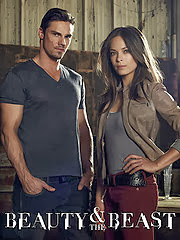 Catherine and Tess have coffee and discuss Li Zao’s death – the man who was almost certainly killed by Vincent. Of course Catherine has a token “maybe it wasn’t him”. Catherine is concerned that someone may find him and he may lose control – and she’s not sure about Gabe’s motives either and…

Is anyone concerned about the corpse at all? The murder victim? Anyone? No? Ok then, carry on police people!

Catherine laments that she just wants to spend time with Vincent before Gabe joins her and she grows all snarly because he asks their help to find Vincent before he hurt someone. How dare he suggest that Vincent is an out of control killing machine while he’s still covered with the blood from the murder and has a history of… being an out of control killing machine! And anyway, this brutal murder was because of revenge – that’s totally ok!

Did they retcon Catherine so she’s no longer a cop or something?

Gabe and Tess desperately try to talk sense into Catherine. Gabe has already agreed to not to prosecute Vincent but he does want Vincent to be locked up and observed while they figure out what is wrong with him. Tess adds that Vincent may have killed before but this death was brutal AND premeditated murder, not intervention. Catherine holds onto revenge as a justification and how her magical twu love will totally get through to the guy who doesn’t even remember her.

Did they retcon Catherine with a considerable reduction of brainpower or something?

Facing the horror of Gabe and Tess actually being kind of sensible about the potentially unstable killer with super powers running around the city, Catherine runs to JT determined that they find Vincent before Sensible Squad does. JT doesn’t trust Gabe (for good reason) but isn’t entirely in agreement with Catherine’s plan – a date! A picnic! Yes, as JT puts it, she expects several months of black ops killer training to melt away in the face of Catherine’s romantic dinner date. This is why JT takes so many antacids. Catherine is convinced that she can cure Vincent with a picnic on her roof (tapping into his memories of romance)

Did they retcon Catherine with a complete removal of anything pretending to be common sense?

Everyone goes looking for Vincent and finds nothing – not even Reynolds (Catherine’s biological father, the FBI guy controlling Vincent and using him to kill people) and his people know where he is – though Reynolds is confident he will come through with the murdering.

Vincent finds Catherine and he seems as bemused by the whole picnic thing as anyone else with half a braincell. After dosey-doing around various questions for a while (which Vincent does not answer) Catherine finally asks about him leaving – and Vincent promptly runs, refusing to answer the question

But Gabe and Tess are following him on CCTV, having set up around Catherine’s building expecting him to show up (Catherine finds this outrageous – they can only hack into other cameras, not the ones near her!) and Catherine sets off after Vincent while talking to both the Sensible Squad and trying to get rid of them in her conversation with JT. Unfortunately for her, she hasn’t mastered putting people on hold and lets slip to Gabe that she wants Vincent to get away. She hangs up, Gabe is sad by her lack of co-operation, Tess is wryly amused because she always kind of is.

Catherine follows him to his next mission – he set ups opposite a prison and shoots a prisoner through the window with a dart. The dart causes the man, Carlos, to seize. Vincent then swoops in as the doctor on call to question the man (by the sound of it, head of a drug network).

Tess calls Catherine to assure her she’s not on Gabe’s side and offers to come as back up since going alone is a bad idea – and Vincent grabs Catherine and knocks her unconscious with a Vulcan neck pinch.

She wakes up tied to a chair, blindfolded in Vincent’s lair (possibly a boat)  trying to convince Vincent, again, that she’s helping him, protecting him and is his girlfriend, honest. Adding that she understands the murder of Li Zao because of revenge – though even Vincent says it’s not that simple. She tells him to use his beastie senses to tell if she’s lying – but for that he needs to look into her eyes.

Really? Because super-senses detecting lies from, say, elevated heart rate, sweating, breathing? I can kinda go with that. But her eyes?

Meanwhile, Gabe gets the news about Carlos (who is a drug kingpin) and his “doctor” and tells Tess – which confuses them both because why would Vincent and Muirfield do that? But Tess is more concerned by the disappearing Catherine

Speaking of, she keeps talking and Vincent notices her motionsickness form the boat with his super beastisenses. While giving her water she tells him acupressure also helps her – he’s reluctant to untie her wrists but she points out it’s not like she can overpower him or escape. He massages her wrists in an apparent therapeutic manner and they discuss sandwiches and how he is drawn to her and maybe this was a romantic kidnapping (oh dear).

Poor JT at Catherine’s flat gets Tess coming in in person and Gabe calling him. They can’t track Catherine’s phone and both of them give him grief until he spills about Catherine and her picnic idea (though Gabe insists he didn’t say he was going to put Vincent in a cage)

Catherine and Vincent go over more memories – or rather more things Catherine knows about Vincent but he has no memory of – he has no memories of personal experiences in order to make him a better soldier. And no, he can’t tell her about the soldier part. They share more memories, this time romance ones and Catherine tries to see of a kiss will restore his memories. It doesn’t. she tries again. It doesn’t. She tries again. It still doesn’t. She tries sex. Purely in the interest of investigation of course

Vincent suggests trying again this time (does this need another “FOR SCIENCE?!” I think it does) but still no memory pings – and he gets a call from work. Catherine is frustrated that her vagina didn’t cure Vincent’s amnesia and even more frustrated when he ties her up so he can go do his mysterious soldier job that he won’t tell her anything about.

The Sensible Squad meets up – with some hilarious side snark about the amount of time JT and Catherine have spent together without her (the protagonist is getting a new best friend! This will not stand!). they do get a ping from Catherine’s phone over water – which Tess assumes means she’s UNDER water – as in dumped. She promptly blames JT and Gabe. And Gabe leaves them both behind and goes to find Catherine alone so a) he can gain back Catherine’s trust and b) because she doesn’t trust JT or Tess to be objective.

Gabe finds the boat – and Catherine on the floor, tied up, not happy. He frees her and she reluctantly agrees to co-operate while she goes through his computer and finds files on a woman called Gina who his hugging Garollo, another drug cartel leader and competition for Carlos. Gabe theorisies that Carlos gave Vincent instructions to kill Gina. Muirfield weaponises people, maybe Vincent’s “soldier” means “assassin” – and someone has bought Vincent’s services.

Using his files they track him and Gina to a club (where Gabe is known, claiming once to have been cool. Once).  And Vincent, already luring Gina aside, hears Catherine’s super special heart beat. Vincent confronts Catherine, making it clear he finds her possessive and stalky (from the guy who kidnapped her) and that he’s there to protect Gina, not kill her.

Vincent rushes back to Gina who is speaking to a man who is trying to convince her to leave – and Gabe arrives. Gabe flashes his badge (he has a badge? Do DAs get badges?) and tries to get Gina to come with him – and Vincent arrives. Gabe focuses on Vincent and not the creepy guy pulling Gina away. Of course, not being a beast any more, Gabe doesn’t delay Vincent for more than 5 seconds.

Vincent runs out to find the strange man holding Gina by the throat and Vincent attacks. The other man turns Beastie – oooh another Beast. They fight and Vincent manages to stab the other Beast – just as Catherine arrives; he leaves, carrying the body with him and disappears before Gabe can catch up.

Tess and JT go to a bar – Tess upset by being out of the loop (Gabe texted to say Catherine was fine – but Catherine didn’t) and we have more of Tess’s jealousy over JT. They talk it out and come to a position – Tess supports her best friend, Catherine, even if that means working with Gabe or not acting in Vincent’s best interests. And JT works for his best friend, even if that means getting close to Catherine.

Gabe and Catherine meet in the police station and Gabe has tracked money from Carlos to a company that funded Muirfield – so Carlos did buy someone like Vincent and Vincent went to Carlos to find out his target to protect Gina. Catherine makes it clear that Vincent was the good guy – Gabe, more sensibly, counters that someone else may have bought Vincent and if there are more Beasts then they need to work together.

Catherine returns home to a note on her door – “Roof”. She goes up all giddy and happy and babbly – they have a warm touching moment and think about maybe having that picnic – but Catherine asks questions, why isn’t he “supposed” to meet her? Who says – who is in command – who pays for his boat? He closes down, he refuses to talk to her if she asks questions and refuses to let her in – again saying he doesn’t remember her and that she was just one night. Catherine objects due to the amount she risked and gave up for him – she is not a one night stand. She grabs his arms and he turns round roaring “I don’t even know who you are?!” and pushes her, sending her flying.

Catherine goes to Gabe and tells him he was right – Vincent is too dangerous.

So angst in spades – that’s to be expected. But the plot behind the scenes once we get past the whole “nooo Vincent my love!” seems to be deepening and is certainly intriguing in its own right

But Catherine’s “love conquers all” mentality feels… silly. Not that she shouldn’t be deeply in love or desperate for Vincent’s return or devastated by his forgetting her – she should be, by all those things. But as a woman who has lost what she has lost and who have worked for the police as a detective as long as she has… I would expect more cynicism from her. Especially since, in season 1, there were times when she, JT and Vincent all accepted that Vincent needed to be caged.