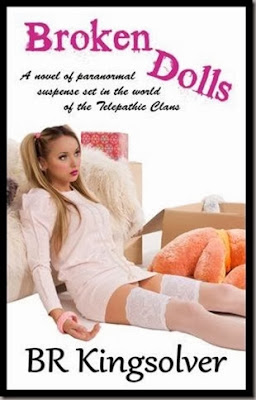 RB is a powerful telepath and a private detective, working outside the clans on a series of mundane cases, often finding cheating spouses.

But outside the clans doesn’t mean she has no ties to them and when a young druid is kidnapped – one among many, she is the one that Lord O’Byrne turns to to investigate.

So much good to say here.

Let’s start with the world. A world with a huge hidden population of Telepaths – with varying gifts. Some of those gifts produces druids – or succubi (with lots of history explaining this odd link). And by varying gifts – our protagonist, RB has 15 separate ones and I get the impression she doesn’t even have a quarter of them so there’s huge scope for “varying” under that umbrella. The Telepath clans are woven into our history in a way that draws on it and explains their current affiliations, enmities and ongoing issues but doesn’t appropriate it (for example, the Clans are very involved in World War 2 but never said to be responsible for it) but with the odd name drop implying certain famous people are Telepaths in ways that work without being skeevy (like the Medici family for example) and just make me further appreciate the integration. The world is huge and awesome.

The plot is really fast paced and wide. It has a lot of elements all of which are inter-related and draw on each other as RB sees the conspiracy she’s facing grow every wider and more complex as the human trafficking she’s exploring becomes Europe wide and related to various clan plots. Despite that, RB is excellently focused on her goals among the temptation to bloat elsewhere. The action is really well written, the story is extremely fast paced – the race to find and save a girl, the many leads they have to chase down all feel both realistic and exciting; from the excitement of a new lead to the disappointment of another route blocked, it carries you along.

I love the main characters. She’s powerful without her super-woo-woo being her defining feature. She’s blessedly free of angst. She gets on with other women and doesn’t have any of those insta-hate moment. She’s sexual without it completely overwhelming the story. Her main assets, despite all of her super powerful magic and her supernatural beauty, is actually her brain and detective skills. She has familial support despite her estranged father, she has a community, she has a life and she’s happy about it. It’s kind of sad how rare all of these elements are and how refreshing it is to have a protagonist who combines all of them.

I have to say with all this awesome world building that there was perhaps too much. I felt sometimes like I was reading the second book in a series – there were so many clan names, so many special powers, so much history, so much detail so much information – it was hard work to keep up with it all at times. I actually started keeping notes before finally just reading and running with it – maybe I’d forget the information just given but usually it wasn’t too relevant and I could get a rough idea of what was happening.

The same applies to all the characters – so many characters from so many clans on different sides and different factions. This was somewhat worse than the world building because I actually had one of her allies confused as a bad guy for a time before realising my mistake.

And then there’s the story. RB moves from Ireland to London to Paris to Munich and there and back and there and back meeting new people, following leads then checking on old leads – all at that excellent pace I mentioned. It makes for a really exciting, fast paced story. But it also means that I got confused more than once. I say again, you can keep reading through it, you can keep going and pick up the train you’ve just derailed – but it’s not something I like doing

There’s also a problem with the inclusion – there isn’t any. And this is a book with a vast number of characters. A truly huge SWARM of characters. Characters characters everywhere! So many characters that, as I mentioned, I had real trouble keeping up with them all. There were a lot of people and they were all cis, straight, able bodied and white. The only indication we have of more are the Chinese telepath clans who are the ones who ultimately want to experiment on the genetic code.

There are a number of female characters that work really well with the protagonist. We don’t have any of that “there can only be one strong female character” moments. She works with Morrigan consistently as equals with both of them bringing skills and assets to the investigation. Towards the end of the book she works with Rebecca and, if anything, there’s a suggestion that she outstrips RB in several areas (just as RB beats her in others). They’re not competitive, they don’t hate each other, they’re not jealous of each other – they’re capable professionals who are getting the job done with respect and class. Because of that, it also means we can have a diversity of female victims and even female villains and they fit without upholding any tropes because there is such a plethora of female strength. We also have some excellent challenges of over-protective men and a lot of misogynists and rapists getting their just deserts.


In total this book is an excellent book including some very good analysis of human trafficking, the danger and the horror of it. It has some amazing characters and a world that I really want to see more of all with a plot that flows at excellent speed. It just needs trimming down or slowing down in places because I get lost and overwhelmed with the huge flow of information. And if you’re going to have a gazillion characters, you really need more diversity