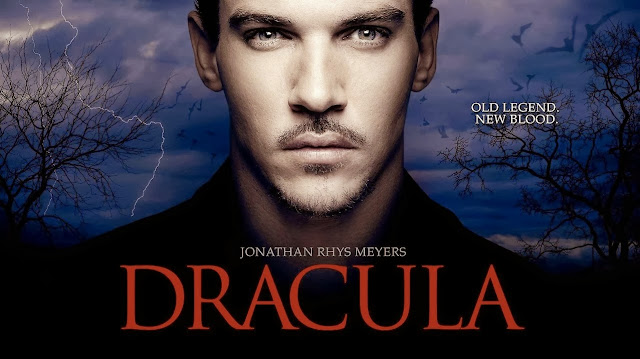 Opening flashback! And as is so perfect on Dracula, we begin with the juxtaposition of a beautiful tree, covered in blossom, contrasted with Dracula tied to a pole and being beaten and tortured. After a little while of this, the torturers (who are all wearing nifty robes and doing the ominous chanting thing) then force him to drink blood from a goat’s skull then slit his throat. He staggers forwards towards a hallucination of his wife then apparently dies.

He wakes up hanging from his  wrists in a chapel with a monk telling him he’s paying the price for defiance: and using the power of the god Dracula denounced Ordo Draco has made a monster – you’re condemned! Condemned (condemned to live forever with supreme power but an unfortunately limited diet and aversion to tanning salons. Can I get an order of that condemnation over here?) He’s condemned to endless night (that’s ok, I wasn’t a morning person anyway) which is certainly more unpleasant when he pushes Dracula into the sunlight, which burns him (ok, SPF 500 suncream may be necessary)

Dracula responds to this condemnation by snapping his chains and baring large fangs.

In the present, that former snarling, blood stained monster is elegantly dressed and soulfully playing a piano. He’s thinking about Lady Jayne and her “unwholesome avocation” (Renfield, always with a perfect word, asks “which one?”). As a vampire hunter she must be affiliated with the Order, even though she’s a woman (Dracula expects the Order to be a Boys club?). He’s also got a letter from Lord Laurent’s solicitor (the man he is homophobicly blackmailing) and he’s succeeded – he now controls the Coolant Company.

Jonathan is all mopey after Mina kicked him into touch after his sexist rant last episode, looking mopily out of his hansom window. Lucy calls on Mina and finds Mina is waiting for Jonathon (nooo woman, stick to your guns!) Lucy wants to go to Paris and take Mina with her to cure her broken heart (I have to say a trip to Paris rather beats a cake and a pint of ice cream – she’s good).

Onwards to Bethlem hospital (with a rather less gratuitous depiction of the mentally ill than we normally see, flower eating aside) and Lady Jayne asking Dr. Murray for help with her two unfortunate relatives (the Seers I presume)

Dr. Murray goes to consult with an expert which, unfortunately for Lady Jayne, is Van Helsing. He spills her secrets to Dracula and they figure out she’s looking for a stimulant for the seers – and Dracula tells him to give the drug to her. Because if she thinks the seers cannot help her, then she will turn to another method, beyond their control. Crafty vampire.

Renfield and Jonathan drop in on British Imperial Coolant for Renfield to demand all of the company’s production be funnelled into Dracula’s new, shiny project. The manager there huffs and refuses outright and racially insults Renfield (Jonathon takes issue with the insult) who calmly informs the man he’s fired, his employer owns this company, his employer is in charge here, Renfield speaks for his employer. Or he can do as he’s told. The man agrees to obey – Renfield makes him call him “sir.” Renfield is toweringly awesome.

As they leave, Renfield quietly chastises Jonathon for his distraction during the meeting (thinking about Mina) and gives him a list of people to make friends with. Renfield also tells Jonathan never to presume to defend him to anyone again.

Following Renfield’s instruction, Jonathon goes to a top restaurant and is noticed by important people as “Greyson’s man”. There follows a knotty etiquette issue with Jonathon and the interested party both sending each other bottles of wine.

Elsewhere, Lord Laurent is in deep shit with the Ordo Dracul for selling his shares to Dracula – after all, if Dracula can make his invention work their prime earner, their monopoly of the oil market, will be completely worthless. Even worse, because of the homophobic blackmail, Lord Laurent cannot even justify himself.

At Lady Jayne’s, Dracula wakes up next to her and goes exploring, finding her secret passage to her secret basement full of chains and cages and swords and big Ordo Dracul mosaics. Well, I think that answers the question of whether she’s a member or not. He finds the vampire Lady Jayne keeps in a cage, who begs Dracula to kill her. His eyes look either bloodshot or teary and as he makes his way back to the bedroom he does not look like a happy vampire.

Lord Laurent leaves the bed of his lover to go face death – he feels he has no choice. They cannot escape the Order, they cannot be open with their relationship and Dracula has forced his hand. He sits with his son briefly before going to a meeting of the Ordo Dracul. He admits he put his own interests before that of the Order. He agrees to “accept the blade” and they stab him in the heart – he’s dead.

Lucy and Mina prepare for their night out but Mina asks if there was anything from Jonathon for her – and Lucy says not a thing. So Mina jumps into the fun with both feet (and a whole lot of booze). As they should. They return near dawn, laughing and raucous (and watched by Dracula who has been waiting half the night – but doesn’t get to see her face when she reads the card he left because of the rising sun) the card and flowers are cryptic and anonymous and Mina looks both thoughtful and confused over them.

Dracula returns home in a massive bad mood to heckle Van Helsing on his lack of a daylight vaccine and isn’t happy that the best Van Helsing can do so far is 3 minutes and 12 seconds of sunlight exposure.

Mina’s party continues with Mina and Lucy slumming it and drinking absinthe – and Mina staggering through a door into a courtyard, the same courtyard with the beautiful tree where Dracula was transformed. The door closes on her – and she wakes up, putting it down to a hallucination from chasing the green fairy. A man arrives to flirt with her with poetic flattery and she mocks him and is laughingly contemptuous of the idea that any woman would actually fall for that. His pride pricked, he snaps at her for slumming and treating the lower classes like animals in a zoo. When he seems to get menacing a man grabs him for behind and throws him across the room.

Dracula of course. The man is smart enough to run. Mina and Dracula have a moment where she tells him of her problems with Jonathon and he slyly drops in the idea that she might be happy with someone else.

Dracula goes home and catches up with Jonathon about the people he’s having lunch with and getting close to and Dracula brings up Mina (Jonathon doesn’t want to talk about it, Dracula insists on doing so since he’s being so mopey). Jonathon explains his problems with Mina and Dracula calls him a fool – Jonathon wants to raise above his social station in defiance of social convention, but he refuses to let Mina do the same?

Mina wakes with Lucy looking all longingly at her (I sense unrequited love) before hurrying to Von Helsing’s lesson (at least he has a hangover cure for her) and he does keep her on as his assistant.

Van Helsing has his serum delivered to Lady Jayne’s seers. They take it and successfully see Dracula having sex with Lady Jayne – but he does something and the seers collapse, gasping for air, possibly poisoned by Van Helsing’s drug. The serum paralyses them and Van Helsing arrives. He tells them what the order did to his family, and that he needs Dracula. He adds that the drug will remain in their brains and he is the only one with the expertise to administer it so, alas, he must destroy the evidence. With a hammer

Jonathon goes to see Mina – and she apologises (Oh Mina, no) though he says he should be the one who apologises – and does. He promises to respect her dreams and love her – and she wants to marry him, he gives her a ring and they have a dramatic, camera panning kiss. Dracula, your plans for Mina have been badly derailed by your playing cupid. Despite this he watches from his coach with a  mopey look. He returns to Renfield and they drink brandy together. He tells Renfield what he did and how he’s a good person who did a good thing, Renfield is a wiser man and has a fine eye for seeing through bullshit, points out that by having Mina marry his employee, Dracula has kept Mina within his orbit. Dracula reminisces of the first morning when the sun burned him and how he ripped out the throat of the priest – not a bad morning, Renfield reflects (did I mention this guy is awesome).

Lady Jayne and boss Dracul man whose name I can never remember find the seers horribly dead and are aghast that their trackers have been tracked.

Lord Laurent’s lover, Daniel Davenport, cries over a picture of them together, loads a gun and there’s a shot. His father goes to check on him – he’s dead, suicide by shooting himself in the head. He left a suicide note revealing all that his father reads.

Renfield is amazingly excellent, if that were in doubt before this episode added a strong indication. Dracula’s second (over Jonathon), calm, suave, excellently in control and dragging a racist out onto the carpet and making him fold AND telling Jonathon he fights his own battles and doesn’t need Jonathon to go to bat for him.

Unfortunately, with the death of the seers (who were a dubious portrayal anyway) we have dramatically reduced an already limited number of POC on this show.

We have a tragically dead gay or bisexual man, driven to his death by the protagonist’s homophobic blackmail. In response to this, his gay love kills himself. Homophobic blackmail, dying to stay closeted then a tragic suicide. I think we just got Bingo. It’s revolting that this trope laden, homophobic, tragic gay death is still representation in 2013. The 90s called, they want their damn storyline back and please let the decade keep it this time.

It does seem that Lucy’s interests in Mina are more than merely friendly. She better be careful with that – she’ll end up being blackmailed, killed or dead by suicide on this show.

There was an interesting interplay of sexism and classism with Mina and her admirer – he lashes out because she spurns his advances, though she owes him nothing. His anger is pure sexist assumption that any woman owes him time of day: but the manner of his anger – calling out Mina for her slumming is very much on point