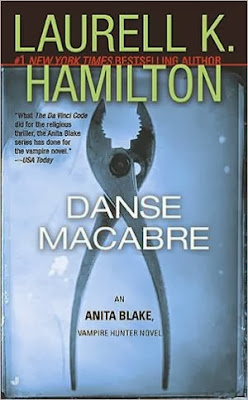 Anita has missed her period. That’s more than enough drama considering the possible fathers, bickering from Richard and the various birth defects that vampires and shapeshifters can have.

But that is eclipsed by another problem – Jean-Claude is holding a grand meet up of Master Vampires to watch the ballet. Masters of the City are gathering in the city, including several of Jean-Claude’s old friends. So many Masters together is bound to be a source of drama – each with their own hidden ulterior motives to navigate. And Anita’s powers – her Beasts, the Ardeur – are eternally unpredictable leading to a whole new level of problems

This book has a pattern. Woo-woo happens: Anita’s the beasts rise, the ardeur does it’s ardeury thing, Belle Morte drops in to cause trouble because she really really needs a hobby, the Mother of all Darkness looms into vision and is all spooky but doesn’t really do anything. They deal with the woo-woo, this usually involves sex or pseudo-sex or almost sex (of course it does) and then they talk about it. For hours and hours and hours. For once this isn’t the book where sex completely overwhelms everything else – this is the book where TALKING about sex completely overwhelms everything else. Sex, their powers, their angst, their issues it’s vast chunks of people sat around talking about woo-woo and Anita’s vagina. All made even more painfully long winded by people having not a braincell between them so having to have everything explained to them AGONISINGLY SLOWLY!

Augustine’s issues: woo-woo, sexy times then absolute chapters of post-match analysis with him completely not understanding, well, anything – we have pages battling his issues, his emotions and the problems of his woo-woo. We have chapters of it. Samuel’s family drama – woo-woo, sexy times, then more pages of post-match analysis. Then we have Richard’s issues for more endless discussion. Then Anita and Asher have a woo-woo/sexy/angsty discussion moment. Over and over again, the pattern repeats itself – all interspaced with the endlessly returning woo-woo drama: the super-ardeur means Anita’s vagina will eat all of the guests – let us talk about this for chapters on end!

We actually have a pregnancy scare in this book. And it’s a background plot point – I kid you not, it is driven into the background by the endless woo-woo/sexy/discussion scenes in this book.

Normally when I review a book I mention what happened in the book and how it relates to the story to date. With the Anita Blake series, I have actually read all the books and am now coming back to them which gives me the unique opportunity to also mention how what happened relates to the future. I wouldn’t usually do that because of spoilers and because it’s not really relevant most of the time – but in this case there’s a strong exception.

Because things happen in Danse Macabre, great big important things that are then completely and utterly irrelevant, never to be spoken of again, never to matter again. Big revelations and progress in what should be the meta plot happen but they have no impact on the rest of the story

Augustine, the Master of Chicago and all the many many many pages devoted to him? I think they may mention him once in passing after this book. That’s it. That whole scene with him is irrelevant.

Samuel, master of Cape Cod and his siren wife and siren issues – major plot points for the future… except, not. His son because one of the deep deep background characters in Anita’s life, mentioned once every other book and that’s about it.

London, Ardeur battery – why we have a story here of addiction and a perfect key for the Ardeur and… nope, he falls in the plot box, along with Elinore (there was a slight risk of a competent woman standing around Anita which CANNOT BE ALLOWED! HOW VERY DARE YOU!). Requiem, Meng Die and the whole ardeur slave thing just came up then went away. Merlin, Adonis, the big rolling all the masters thing? NONE OF IT IS RELEVENT AGAIN! Major plot points, characters who should be able to shake the very foundation of Anitaverse and they all disappear with nary a ripple to show their presence!

This is a problem – it means that the actual glimmers of plot there are in this book are rendered pretty irrelevant over the course of this 20+ book series because they’re completely and utterly ignored in the future.

And it’s not the first time. We still have Valentina and Bartolome running around being creepy creepy kids. They first joined Jean-Claude for convoluted reasons and are now just hanging around, cluttering up the place. And cluttering is the operative word – because not only do they frustrate their own books but they leave little presences for all future books, like stains on hotel sheets from past hotel guests – cameo walk on roles that achieve nothing but distraction in books – and an entire series – that already has severe problems with actually focusing on the plot and maintaining a coherent storyline.

One positive bonus was Claudia. A woman in Anita’s life shedoesn’t hate – and she was toweringly awesome supporting Anita and fending off the men over the pregnancy scare. She was excellent and I dearly hoped that Claudia may possibly because Anita’s friend and be around more often and let her have one woman around who was as excellent as she was. Alas, in future books it’s not to be and Claudia, like Elinore, disappears into the background– but this book Claudia is awesome.

Unlike Ronnie who hates Anita for all the hot sex she’s having. And Augustine’s mistress because she’s had 8 gazillion rounds of plastic surgery and is still a not as beautiful as Anita. And Meng Die, who nearly kills Requiem because he turns her down in favour of precious Anita. And Thea, the Siren who uses her evil sexy powers to sexually assault people (which is terribad and Anita would NEVER do such a thing. Except when she does) and wants to sex up her sons (uckies).

There is some good commentary about how sex workers are dehumanised and treated as meat to be consumed rather than real people, as well as commentary on abortion as an option. But the first is also presented as part of the reason why Ronnie is such a terribad person and the second is hit with Anita repelled by the very idea because it’s her baaaaaby!

Then there’s the hot mess that I have described when discussion GBLT characters in this series. Augustine. The man she and Jean-Claude shag into submission.

This is also the book where Anita discovers that seeing two men get it on flat does it for her. So all those bisexual men who were not touching each other and avoiding each other for the sake of her delicate straight sensibilities can now get it on because Anita is getting off on it. Sexuality between two men becomes acceptable when Anita is getting her jollies watching.

POC wise, other than Anita herself (which we've discussed before), we don’t have a lot – and that includes Meng Die, (Dragon Lady – described as a “petite Chinese doll”) who hates Anita and is considered to be a delicate, damaged and viciously unstable, sex obsessed woman. And one of the guards who is only saved from being a bit part by the interminable long winded, recap clogged, writing.

But beyond all of these repeated complaints my problem with this book is its lack of any real plot – there is no real storyline. There are semi-storylines, little events, unconnected happenings, but no plot. The Mother of All Darkness appears randomly, the vampire ballet troops swoops in at the very end of the book, the pregnancy scare ended half way through and the rest was angst, relationship issues and the various problems the ardeur has caused yet again. It’s like a lot of side plots got together and huddled together for warmth. And the book ended pretty much exactly where it started-  except with some new characterless men in the stable and the gang is even more woo-woo than ever before.

Edit to add: And whats the hell is that cover? A pair of pliars? Really? Is this implying some kind of stark, Saw-style torture? Short of reading the interminable angst aloud to someone who can neither block their ears nor get away, I fail to see how these recent crop of stark, disturbing covers are even remotely relevant to the series.