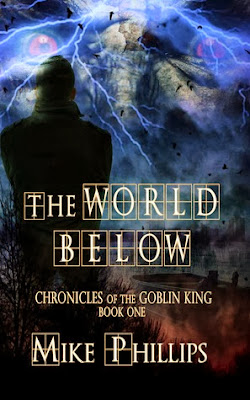 Mitch is struggling, after an industrial accident left him badly scarred with few resources left. He resorts to busking, beginning to build a new life with new friends – and things are looking up when he finds a woman who likes him and is able to look past the scars. This new life seems to be really beginning.

Except the woman, Elizabeth isn’t entirely human – and she has something that the nefarious and domineering Baron wants – and he’s willing to extort a wizard, Hume to help him get it. Mitch is some easy collateral damage in his schemes.

On the plus side? We have the beginnings of a wide, gritty world with an oppressive dark underworld populated by a myriad of supernatural creatures and quite possibly a dark anti-hero in the making

We spent most of the book following Mitch – the young man who became a busker after his terrible industrial accident (with some very unsubtle “rawr, Unions are bad!” rhetoric around it). The young man who has very little, if any real connection to the supernatural. The supernatural kind of happens around him or we’ll start to follow a story about one of the actual supernatural beings – and then it’s back to Mitch and his guitar and his friends and generally a whole lot of minutiae I have been given zero reason to care about. That’s what gets me – it’s 200 pages in and only now is Mitch having the Supernatural reach his storyline in an overt way: and that’s because he fed a cat that turned out not to be a cat. All this time spent on him and I really do not care about his character and find him a massive distraction to the actual story.

And the other characters who are involved in the quest to find the MacGuffin are just not that well developed in comparison – or at all. We have the Baron who is an evil, despotic… thing. No I have no idea what he is or what he can do, it’s never explained. He just is. And he wants his MacGuffin.

There’s Hume, the wizard who could be an interesting character but, alas, we have to spend more time with Mitch badly scarred by the terribad evil unions. Hume has a sister who is Damselled that forces him to work with the Baron to rescue her. He glares and grumbles a lot – and looks for the MacGuffin, again no real character

And then there’s Elizabeth, who has the McGuffin and plays magic pixie dream girl to Mitch. That’s about it – she has the MacGuffin but we don’t know how or why, or even fully what she is or what that means or anything about her other than the fact she’s not put off by Mitch’s scars and is rather whimsical. Manic Pixie Dream girl – I mean elf. Manic Pixie Dream Elf. Or possibly fae.

Any of these characters could have been remotely interesting if they were developed and if we followed them or if Mitch were more solidly involved in the story happening around him – but instead it was dull and very undeveloped. I call the sword a MacGuffin because there’s very little else to it. It could be anything, the only defining element of the sword is that Elizabeth has it and the Baron wants it.  The story become slow, long winded, full of distraction and so very lacking in any real character or detail. Any scenes that have been created for character development have been given to Mitch and since the whole character feels out of place and unnecessary, that pretty much renders these scenes the same

Much the same applies to the world – yes it has a plethora of creatures in them, but really, they could be anything. It says goblins and trolls and fae and dwarfs and pig-orc men. But the orcs could just as easily be normal human heavies, the others could be dispossessed humans under the Baron’s yolk. There’s nothing about their supernaturalness that is relevant to the story because they’re just labels. They could be goblins, or people, or weremoles or animate talking rabbits and the story wouldn’t change.