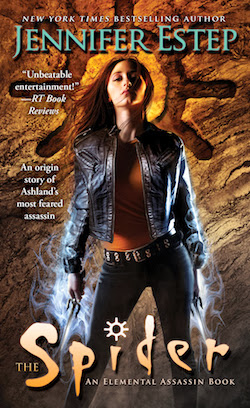 After Gin receives a mystery gift, she tells Own about one of her first assassin jobs – and a job that she screwed up royally. Too young, too emotionally connected and too hasty, it was the job that truly forged Gin into the Spider she is today.

I’ve always thought it was odd that Fletcher’s sobriquet was the “Tin Man” because he had no heart when he was clearly a, well, “ethical” assassin, as much as that is a contradiction in terms, with strict rules about who he killed and why, rather than just taking the money and getting the job done. In many ways he acts as a vigilante hero in a town where the police are unfit for their purpose. But this book made it much clearer and more sensible – how even being ethical means not getting emotionally invested or distracted. This, along with Gin’s signature patience, is shown through the mistakes Gin makes as she personalises the pain of her target’s victims and consequently rushes in without due care and attention – or research.

It added some nice backstory to Gin and just fleshed the whole process out a little more as well as emphasising the qualities that make Gin a good assassin above and beyond most.

But as far as the series goes I have to say I’m losing interest a little. It’s a shame because I love this character and I love this world – but there’s a limit to how many times you can do they “Gin has to kill someone, look she has” and make it original. To be fair, each book has introduced different elements and they were good books in their own right – but the first half of the series had lots of drama and intrigue and meta with us learning about Gin, learning about her life and her ongoing quest to defeat her nemesis. Which she did in Spider’s Revenge. Since then there have been 5 more books and 2 novellas in the series and no knew meta. It’s not that the books are boring by any stretch and we did cover issues that added to Gin’s world: Sophia’s past, Owen’s past, Gin and Owen’s relationship drama, her relationship with her sister Bria, and now some insight into Gin as she was learning her trade as an assassin – but we’re spending all this time developing the characters for what? Because it feels like the series ended on the 5th book and then just kept going. It’s all background with no foreground.

The fights themselves, while well written, well paced and action packed, are also beginning to annoy me. Firstly because, even as a super-skilled shiny assassin of awesomeness, Gin always gets beaten up. Always. Excessively and in incredible detail. In fact, I don’t think she’s a great assassin, I think Jojo is an amazing healer – because without her Gin’s career would have ended after her first kill and her slowly bleeding to death. He skills as an assassin involve throwing herself at her target, slugging it out until the target is dead then dragging herself away to a healer before she actually dies.

Secondly, I’m annoyed because of Gin’s super-duper magic. Or lack thereof. From book one it has been drilled in just how incredibly super powerful Gin is but she hardly ever uses that power. Why not make her weak in magic and emphasise that skill (or a good healer within crawling distance) beats magic? Or says she’s weak and can only harden her skin (which she hardly ever does) and make lock picks?

It was especially galling this book because she fights two Stone elementals. Her element. The one she has always been powerful in. And we see what, in this setting, a Stone elemental can actually do when they actually use their powers – and it’s galling to think that Gin saw this age 20 but even in the present-day books she’s still not using her power.

In all, it’s a decent book. Not excellent – as a stand alone it’s fun without great depth, interesting and with some nuance to take it away from being a pure action book. The plot is good while, at the same time, being rather painfully predictable. But as far as a book in a series goes, it’s lacking in oomph to drive it forwards