The Walking Dead: The Fall of the Governor by Robert Kirkman & Jay Bonansinga 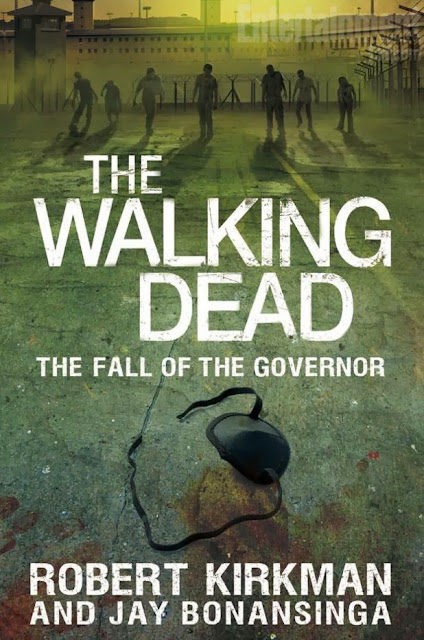 If you’ve read the comics, you don’t need a recap. If you haven’t – Rick, Michonne and Glen visit Woodbury, seen from the Governor’s point of view – Lily wanders around doing stuff I’m supposed to care about. And, yes, I’m aware of how half-assed that recap was, I have good reason.

This book takes place at the same time and involving several of the same characters as in the Walking Dead comics. Effectively, it’s taking the same storyline and look at it from a different angle.

This is a difficult thing to pull off – if done well you can reveal excellent new viewpoints, expand the world, develop the characters further and truly explain what happened with extra nuance, depth and potential.

If done badly, you’ve just had your fans buy the same book a second time, leaving them feeling vaguely like it was a blatant money grab and wanting to throw angry armadillos at you.

This book? Well, I’m currently annoying armadillos until they are sufficiently agitated projectiles.

Did you know the Governor is a bad guy? Yes? Well so did we. This book spends an inordinate amount of time reminding us of the fact. Did you know he cared about his little zombie daughter/niece? Yup! We did too – the comics had already been clear. Did you know that some people cling to him from fear, some people from denial and some people because it’s an apocalyptic world and sometimes you need to make hard choices? Of course you do – the comics have not only spent some time analysing this theme but they positively bathe in it – and we’ve seen exactly the same themes and ideas develop in the books leading up to this one as well. Lily slowly being convinced that maybe it’s a good idea to have the Governor onside is nothing new and felt tacked on so that SOMEONE could be vaguely surprised by the Governor’s actions (the readers certainly won’t be).

In fact, Lily and Austin’s rather random relationship feels glued onto the story to try to add something original and something to tie it into the previous books. But it does nothing, it means nothing, Lily can’t even count as a protagonist. They’re irrelevant to the story – they’re only there because without them the book would be a complete copy of the comics.


In fact, it’s worse than the comics, even if I read this first I’d be annoyed. The comics rather masterfully imply a lot from nuance, they show, they don’t tell – we don’t need to see all of these atrocities from the Governor’s point of view to see what he was thinking and what happened to him – the comics already made it clear. We didn’t need to have exposition on Dr. Steven because the comics had already, elegantly, made his opinions and position clear, same with the fights, same with the people of Woodbury – this was all covered really well. Now it’s been drowned in repetitive exposition just in case we weren’t intelligent enough to get it the first time.

And all this pointless extra info comes with a more detailed look at the Governor’s raping of Michonne and Michonne torturing the Governor. Just in case it wasn’t graphic enough

Added bonus for how Michonne is described:

"The woman on the floor brings to mind an exotic animal leashed inside a pen—dark and lithe and supple, like a panther, even in her ratty work clothes"

Uh-huh that’s some high fetishising othering language going on there. Also, while I’m happy that The Walking Dead does try to include several characters of colour – constantly referring to someone as “the Black man” isn’t ideal if you’re not going to say “the White man” as well. I know writers don’t like using names all the time and like to write “the taller man,” “the younger man,” “the long haired man” etc etc (and, really, don’t. Names are fine. We have names for a reason. I like names). But if you only repeatedly use racial identifiers for POC then it’s Othering and implies White is the default.

To all of that add the most long winded, unnecessarily drawn out writing since Dickens. Honestly, I think someone handed down the word count and they just padded and padded their non-story until they hit it

So we have a complete rehash of the story already told, pour on some extra torture-porn and then season with some nasty racism and ta-da, you have this book. A waste of money and a sorry waste of my time. I’m just glad I read an ebook and not a paper book because no trees should die for this.