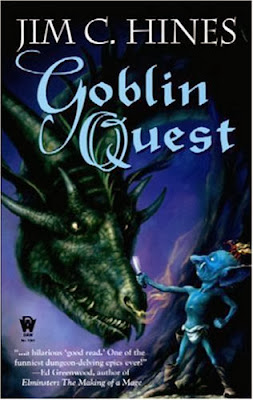 Jig is a goblin. That means cannon fodder. That means pest. That means nuisance. It means creature that wandering adventurers repeatedly stamp into the dust on their way to bigger and more dangerous things.

Not only that, but Jig is the runt of his people. Small, frail, poorly equipped even for a goblin and short sighted. When a bully forces Jig out on patrol and he runs into adventurers looking for loot, Jig’s death looks certain

Through wit and common sense (both of which sorely lacking from the “heroes”), Jig manages to live – but is dragged along to play guide as the adventurers rampage through his mountain home looking for their great prize; while Jig desperately hopes to stay alive in the face of hobgoblins, poisonous lizard-fish, the undead and, of course, a dragon.

He’d also quite like it if his people weren’t massacred. Again.

This book is, I think, specifically aimed at a certain class of reader. If you have read a lot of high fantasy books, if you have played a lot of Dungeons & Dragons, if you are saturated in the tropes that come with that genre and that game and all the stuff that goes with classic sword and sorcery fiction – then this book is aimed at you and you will enjoy it.

It has numerable instances of calling out and poking fun at the tropes in the genre – some of them are tiny references (like poking the improbably-melon-breasted-depictions of women) or the basis of several characters (like Riana, the elf – who isn’t tall and elegant, isn’t classy aristocratic or anything else we assume about elves. And yes, she’s a thief – but why should a thief know how to find traps anyway? Since when do merchants trap their coin purses?) or even poking fun at player habits of the way these games/books are written (Darnak having to carry a massive pack to hold all of his gear – and his obsessive cartography to even navigate the dungeons). There’s a lot of these excellent tropes being poked

But above all there’s the very premise – our protagonist is a goblin. A creature, in this genre, that exists to die. Not even die in a heroic encounter, they barely count as monsters, they’re a nuisance, trash, something to grind through. Inept and incompetent and thoroughly bullied and exploited by everything around them – they would be pitiable if they weren’t so unpleasant. And through their lens you get to see the heroes – the bickering, the arrogance, the contempt, their greed and just how hard it is for a poor goblin to even live with this rampaging heroes attacking his home and stealing anything that isn’t nailed down. It’s a fun reversal and, for me as a player of the games and lover of the genre, it makes me smile to see so many of the staples being challenged –and realising how often my heroes have been these arseholes, albeit seen through a different lens.

Of course, the flip side to that is if you’re not as immersed in the genre and the games then you have a moderately decent story with an underdog protagonist.

It still has a lot to recommend it. Jig is an interesting protagonist – because he is so utterly and completely powerless in a way that very few protagonists are. And while he gains some talents, he equally gains an even greater knowledge of his powerlessness. The only thing Jig has going for him is some decent common sense (and a pretty useless deity – which is another amusing aspect) – he’s not even a super genius or anything similar, he’s merely more sensible (and more aware of his own mortality) than the arrogant heroes dragging him around.

And Jig is very true to himself. He doesn’t start identifying with his captures or suddenly getting on their side or joining the group – the ending is both surprising and very honest and a great subversion of genre-lead expectations. He’s not a nice guy, he’s not that kind, he has the same brutal, callous outlook that characterises his kin but he’s more sensible with it. He’s a goblin – he’s just a sensible goblin. He’s not the good guy per se, any more than the desperate-for-approval Banis is evil (though he is an arsehole).

The story itself is… relatively slow. Again, it depends a lot on the reader -  if you are the D&D fan, the linear story, the side references, the dramatic speeches all make sense and are wonderful lampooning. If you’re not, they’re probably clutter.

Inclusionwise there’s not much here – and not much scope for it either. There’s 1 definite female character in Riana who is interesting for lots of exploration of her fast and feeling of disconnect not belonging in either human or elven culture and a couple of side characters who are probably female. There’s only really 2 human characters – the princes and neither is a minority.

In all, if, like me, you cut your teeth on swords and sorcery novels and you know your way around a D20, then this book will be very appealing, amusing and full of geeky references you should know and ruefully acknowledge. Reading it, I have the strong sense of it being an in-group book.

If that’s not you – well, it’s still a good book with an intriguing and interesting character following am pretty well written, albeit somewhat linear (with a twist ending) book. It’s a romp, it’s a dungeon crawl, all through a very skewed lens that makes it so very different and still worth a read – but I don’t think you’ll get as much out of it as a Fantasy/gamer buff would and the story could use a little tightening up and the pacing moving forward a bit