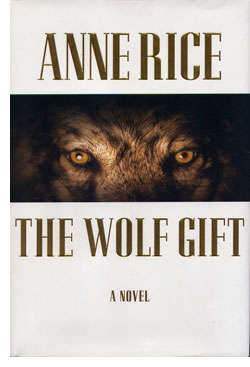 Reuben didn't know that when he went to see the house on the cliff  to write a story for the paper that it would be a definitive moment in his life.  At 23, he was still a young story teller but innocent to many things.  In a matter of hours that would all change in a vicious attack by a beast. With his life in the balance, Reuben was transported to the hospital, only to discover that he was changing.  This metamorphosis led to things like increased strength and vigor, as well as an acute sense of hearing.  Before he knew it, the change was upon him and Reuben found that he was no longer simply a human male but a wolf creature whose nature was to hunt the evil dooer.  In a previous time when man had not advanced far scientifically, this might not have been so bad but in the age of secret government labs, and DNA testing, his new talents could potentially be more danger than gift.

I have read just about everything that Anne Rice has ever written and I went into this novel with a great deal of excitement, only to find myself struggling to finish by the time I reached 1/3 of the way through.  The Wolf Gift is absolutely ponderous and filled with ridiculous purple prose.  Throughout the novel, Rice continually uses three or even four words when one will suffice.   It further didn't help that The Wolf Gift was filled with info dumps and I must say that this completely surprised me.  Rice has always been a master of showing rather than telling. We didn't need continual descriptions of the house or what people were wearing and at times I resorted to skimming for the sake of my sanity.

Much of the novel felt like a cheap philosophy class. There have to be better ways to explore the nature of good and evil than this trite book.  At times I felt like she was testifying, despite the fact that many of her characters were atheists.  Evil, despite what Rice believes, is not always about perspective.  If someone is harming or abusing a child for instance, they are simply an evil fucker. There is no grey and there is no nuance; some things are simply irredeemable.


As aforementioned, the protagonist of this story is a 23 year old reporter named Reuben.  The problem is that Reuben didn't read like his age and instead he felt infinitely older. This tone is quite fine when we are talking about an ancient vampire but it doesn't work when it comes to a 23 year old in present day. In fact, it's fair to say that all characters despite their age, had a similar vocabulary and sense about them.  It was absolutely impossible to invest in Reuben and therefore impossible to invest in this story. Everything felt incredibly dated and drab.

There were no characters of colour in this novel whatsoever and this bothered me because in modern day California, Rice had absolutely no excuse for such erasure.  She did however include three gay characters of which one died in a gay bashing.  It was clear that his death was wrong and that his lover suffered, though momentarily - because he was soon caught up in the Chism and involved with another man. Personally, I could have done without another gay death in print and if it had to happen, why couldn't his lover have grieved longer than a New York minute before moving on?

We had four female characters in his book and we only really got to know two of them. We had Marchent Nideck, who seemed to exist to die painfully and be a source for Reuben's angst.  The poor dear couldn't protect her.  Then there was Celeste, Reuben's over achieving girlfriend, who was quickly discarded and handed off to his best friend.  Laura J. Dennys, who was ultimately deemed worthy of the Chism if she wanted it, completely supported Reuben, offering herself to him that first night when he appeared to her as a beast.  Laura was absolutely passive and of course had  the requisite tragic past.  Finally, we have Reuben's mother the trauma surgeon, who loved her baby boy and grieved that she had lost him to something she could not explain.  Despite all of her talents and love, we were told that it was not Grace who influenced and shaped Reuben's passions, but his retiring father. No, Grace merely nagged him to take his shots and pushed him away from his great purple work as a writer.

I wish that I could write one thing to recommend this novel, having long been a fan of Anne Rice since I first read Interview With the Vampire.  The Wolf Gift is simply beyond defense and I cannot fathom what she hoped to achieve with it.  The background lore on the Morphenkind while interesting, was certainly not enough to hold the book together. Furthermore, it was was presented as one huge info dump at the end of the book.  Between Jim the tortured priest, who didn't believe in God, and the little atheist group of those infected with Chism, we were treated to conjecture on the soul and good and evil which imparted no great depth or understanding of the issues of our age.  I found myself just wanting The Wolf Gift to end and was grateful having read the last page that Rice had finally run out of steam.  Clearly, there is going to be a second book in this series and I hope that during the writing of  next book, Rice will recognize that she failed to tell a compelling story because The Wolf Gift failed to impart the complexity of the far more popular Memnoch the Devil.