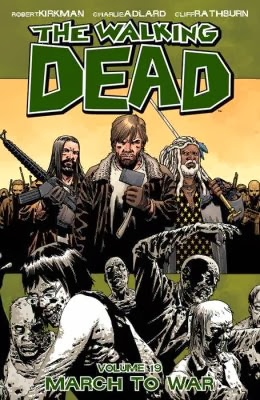 This volume really highlighted the weakness of Rick’s leadership.  He doesn’t trust the people he should.  Let’s be clear, Andrea and Michonne have been with the group from essentially the beginning.  They have fought by his side and followed his orders without question yet suddenly Rick believes that Michonne is some uncontrollable blood thirsty savage?  It’s ironic that despite all of his so called skills as a master planner that he engaged in the exact same behaviour he was worried that Michonne would commit.  Rick is so incompetent at this point that he doesn’t think he is infallible - he believes his own hype and that is the worst trait in a leader. A seasoned veteran does not necessarily make one a military strategist.
Also we need to examine further this problem of Rick treating Michonne like some kind of uncontrolled berserker is getting annoying. On the plus side, Michonne challenges this and explains, yet again, that she doesn’t like the fight, she doesn’t want to fight and if she can avoid fighting then she will - she’s not some loose cannon read to explode at the slightest provocation. This is good. But Rick should know this. He’s already been told this by her - and even if he hadn’t, they’ve been together for a very long time now. He should know her better than this. She should have been developed better than this - it’s a mix of her character growing and being revealed but that growth and revelation also exposing just how much she has just been a walking weapon until now.
Also, it’s not escaped our notice that Michonne and Ezekiel are homing in on romance. If there’s a Black guy around, Michonne makes her moves all the time.  Why is it that she is only a viable love interest for Black men?  Considering that this comic is written by two White men, it really is rather telling on their views of Black women.  I know it’s not interracial relationships because they had no problem putting Maggie and Glen together.
We did have some POC characters being awesome in this episode - Michonne (of course), but also Jesus and Ezekiel. Ezekiel’s back story did a great job in cutting through the whole ridiculous eccentric persona he had adopted and showed him to be far more aware (and capable) than that. In fact, he displayed decision making skills and leadership that completely eclipsed Rick.
Andrea also stepped up pretty awesomely - showing she was more than just a sniper (even while we saw the difference between a good shot and a professional sniper) and her epic “We don’t die” was an excellently powerful moment for her.
And there’s a problem with all of these characters being so competent and awesome. Rick still leads (and doesn’t treat them as the competent people they are) and I have no damn clue why. In fact, I think the writers got insecure at Rick not being in the lime light this episode and threw in the whole speech from Jesus about why Rick is the super leader, better than all the others. Why is he? Oh yes… Even Negan respects Rick (in fact, the whole scene was Spencer seemed to be another attempt to keep him on his pedestal, no matter how it wobbles)!

Related to this - Rick is leading everyone to war and we had Kal’s little betrayal scene. Of course Kal came to his senses and realised how right Jesus and Rick were - but it missed the very valid point he made that Rick constantly makes decisions without consulting people. Again, we see this with Eugene being unsure about making bullets to kill people, not zombies. They have concerns, but they’re brushed over (even used to present them as weak or foolish) rather than given any legitimacy or credence - when they do have a point.
Negan continues very much to be The Governor 2.0.   He is crafty and blood thirsty never showing his full hand until completely necessary.  In some ways, his character is extremely repetitive of what we have already seen.   He rules a kingdom through threats of violence and cruelty; he’s a sociopath with an extreme need for power.  Just like The Governor we don’t know much about his story, leaving us with zero nuance regarding his character or what led him to be this brutal in the aftermath of the zombie apocalypse. He’s a single note antagonist with little to inspire interest in. It’s as though the writers simply handed us a bad guy for Rick to stand up against without any real direction. Yes, people seek power, but they seek power for reason. At this point, Negan is a prop to make Rick once again appear heroic. Hi ho silver the White hero rides to the rescue again.

There were some good moments in this book - I particularly love how Ezekiel is being developed beyond comic relief and there’s some solid depth to him.
But Negan doesn’t have enough about him to make him a compelling villain - and Rick needs someone to slap some sense into him, pronto - or for someone else to take the reigns. If he’s going to be the leader then we need to see why he is the leader - not just be told - and even then he needs to have more faith in the people who’ve had his back for so long.