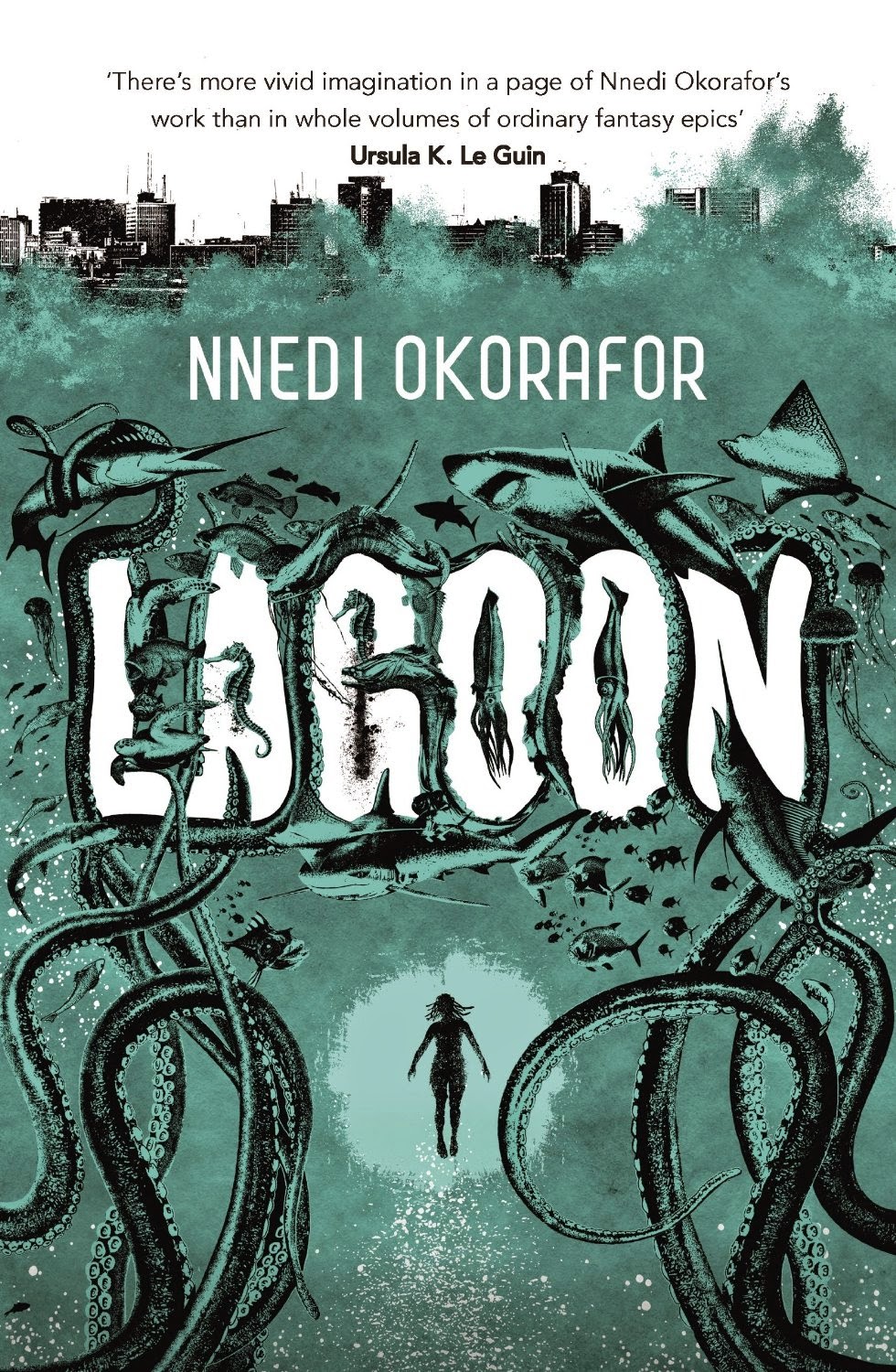 Aliens have arrived in the waters of Lagos and sent their ambassador to contact a few special, gifted humans to carry their message of peace and inhabitation to the national government. They have remarkable abilities, but also goodwill – which they share with the inhabitants of the planet

Whether they are human or not. And some of those inhabitants have no reason to love humanity

But no matter how peaceful the message, it still shakes the people of Lagos. People react to this amazing revelation – and chaos soon follows as disparate groups clash, people react in fear and anger and others seek to understand the implications. And other still seek what they can get as order begins to crumble…

Where to begin with this book? It’s almost impossible because while there is one person I would say is the protagonist, Adaora, we also have a huge number of other characters, some of which are almost as prominent whose eyes we also see through. We get the few days of the alien arrival through dozens of different viewpoints – some of them not even human. Each of which has a new take, a new opinion and a new reaction to the amazing things around them

The different viewpoints bring a lot of fascinating takes to the reactions to the aliens – as we see different people interpret the major events differently, see it through their own lenses and react with curiosity or fear or greed or hope or awe. Each reaction within is shaped differently and even people coming from a similar viewpoint – for example, religious people – react differently despite their apparent surface agreement. People from the same family can be divided by fear, greed or hope.

I’m particularly amused by the man who ends up inviting a much hated alien to dinner and hosting him because no matter his opinions are he has good manners.

I think the reactions are so very real – which means this book full of aliens and wonders has a powerful sense of reality to it. Do we think people would be rational when faced with the presence of aliens? Do we think people would be irrational in the same way? Too often we tend to see stories that divide the population into the fearful/haters and the compassionate/realists. But it’s shows humanity in all its messy glory – people terrified of the aliens and thinking they’re a threat. People curious and desperate. People are looking for an advantage, some way to cash in. Some people are in utter denial and determined to continue their lives. Some people are terrified and think it’s the wrath of god. Some people think it’s a sign of god – and all of them meet together in one giant mess.

And, of course, there are people willing to capitalise on the chaos as well as people trying to bring some reason back to the whole mess. In between that we have chaos creating more chaos because panicking people just don’t make sense – not even close. I particularly liked both government officials not being entirely corrupt and useless (as is common in panic situations so the protagonists can save the day) and normal people stepping forward and being incredible heroes – even if they aren’t the protagonist.

This all works to explain the chaos. I mean, you could read a book and hear “aliens arrive and people started rioting” and scoff at how little sense it makes. Why would people riot? Why would people break things? What would that achieve? How could that happen?! But when you’re in their heads, in the heads of several people reacting with fear and panic and anger and greed, you can see it. All of the dramatic events of the book make sense because we’re not just seeing them all through Adaora‘s eyes as she tries to navigate them. We’re seeing them through the instigators, through other victims’, through bystanders and witnesses and people plotting all kinds of different results. The split viewpoint adds context and clarity and, again, realness to a plot that may have been shaky without it.

Adding to the realness is Nnedi Okorafor’s well known skill for conveying time and place – and the way she has really pressed Lagos into this book. Whatever else this book is about, it is a book about Lagos, a book that is permeated with Lagos, a book where Lagos – its people, its food, its culture, its traditions, its geography, everything – screams out from every page. This couples with some very powerful characters who are really well written. They’re all so very believable – they’re flawed, certainly – in many cases their flaws define them. Because we see the city, the setting and the aliens themselves through so many eyes – so many very real, very well characterised eyes – we get

Many of them are also used to expertly point out prejudices in society – particularly sexism and classism are skewered in painful detail as well as exploitation and corruption – by organised religion, by government officials, by the army – by just about anyone who has the power, perceived power or authority to make it stick and the willingness to push it for an advantage. It’s an unflinching look at the reality so many face with extra nuances – such as those whose wealth and position insulates them from so much (and contrasts extremely with the conditions so many other characters live with) but even how those advantages are not guaranteed shields and anyone, especially marginalised people, can be vulnerable.

We have people from every class of society and from several different religions, each of whom shows several opinions and takes on their situation. They’re not all good. They’re not all evil (though some of them desperately are), but they are all humans, with multiple examples to show the different ways they live, the different views they hold and the different pressures they face. We also have a number of female characters – some are intelligent, forceful, capable, determined – but still face misogyny (Adaora), others are poor, not too bright and easily manipulated (Philomena). Perhaps the more intelligent and capable women do tend to be of a higher education and class which has some implications – but equally those who are poorer are also presented as facing a lot more pressures and being far far more vulnerable to exploitation.

Just about every character in this book was POC, I think there were only a few small roles that weren’t; with all the excellent portrayal you’d expect from one of Nnedi Okorafor’s books.

This book does contain some LGBT people… but it’s not great (to say the least). They’re not presented as evil, but they appear very briefly, are kind of forced into the story rather convolutedly, for some bizarre reason assume that aliens will totally connect with them and decide to walk openly into a crowd where they are promptly beaten and shot. Then they are never seen again – they existed to appear, say maybe 3 lines, be described in an extremely stereotypical fashion and then be victimised and vanish again. Unlike a gazillion other characters in this book, they don’t even get their own voice, instead having to be described  and spoken of by a cis, straight cross dresser, which seems as close as we’re able to get (and even he ends up dying tragically).

Is there an issue with the sheer number of viewpoints? While I can’t say any one of them are bad, them all together felt unnecessary. They were all well written, but for the sake of pacing and bloat one or two could probably have been jettisoned.

There’s also some aspects that felt undeveloped. We had a number of excellent creatures of folklore and deities raising up and becoming involved in the plot. They were well written, interesting and I’d love to read more about them – except collectively they were a tiny blip in the entire book. I’m not sure why they were there and am not entirely sure what they were supposed to have added to the story. It’s not that I disliked them – in fact I’d love to read an entire book centred around these beings and characters – but they felt out of place and squeezed on to the story, a crude addition that just seemed to be there without purpose or explanation. Awesome characters, awesome scenes – but is this the book for them? Especially since the viewpoints mentioned above already expand the book beyond what is, perhaps, necessary.

In the end, this is a fascinating book. Beautifully well written, with a full cast of incredible characters and a setting that is excellently conveyed. It’s original, ducking so many of the standard alien invasion tropes, and focusing on people’s reactions far more than the actual extra-terrestrial visitors at all. It’s truly worth a read – but I think it could also use an edit, a little cutting down, a little trimming of the excess to make it flow faster, cut out the redundancy and remove the completely unrelated that make this book slower than it needs to be.