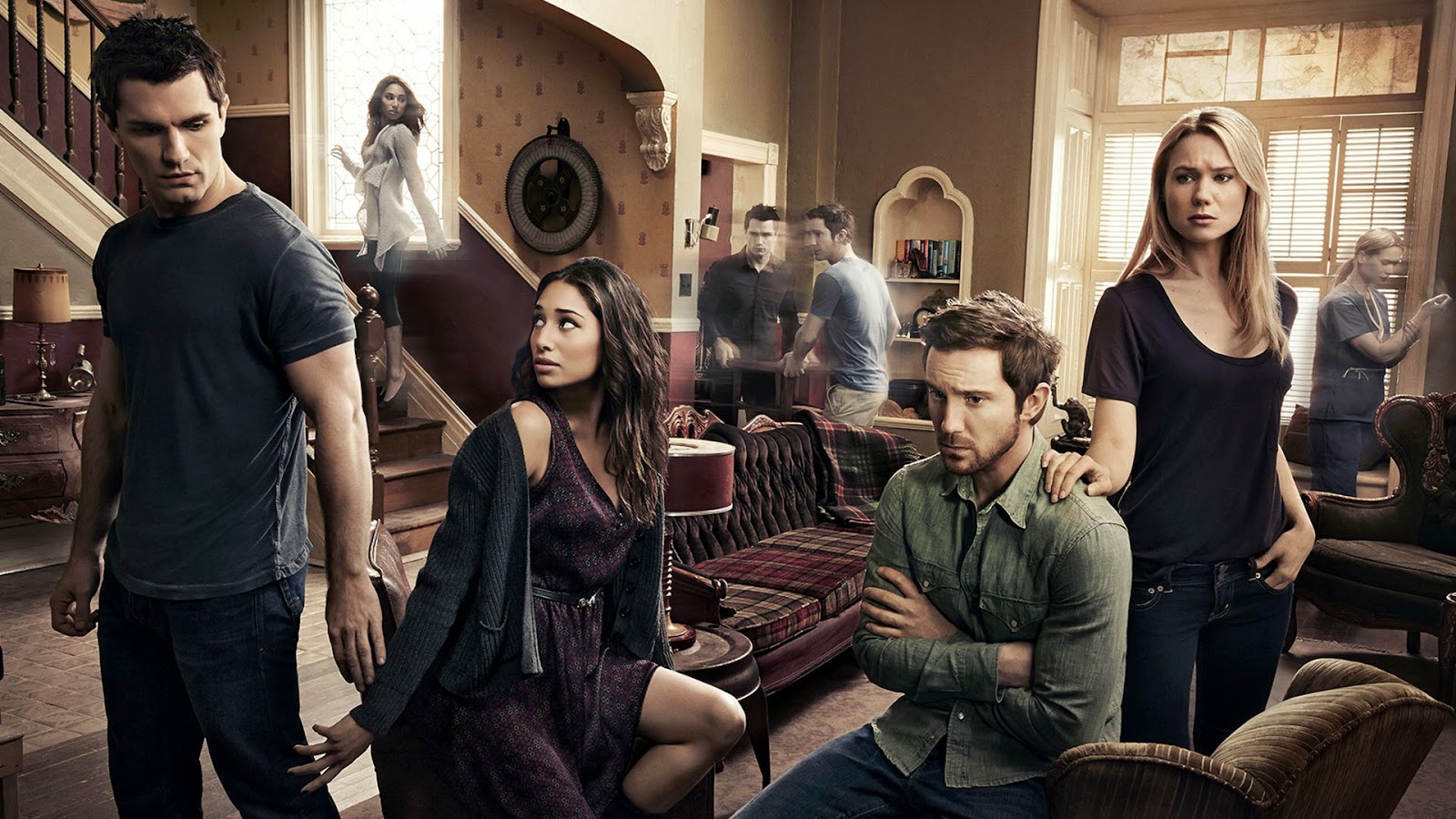 Aidan drops in to see Kenny who has lots of passive aggressive hints about who really killed Astrid and makes it clear he’s not leaving town until vengeance is his. Aidan tries to talk him out of it because vengeance is totally no fun, honest. Aidan also borrows a moving van off Kenny because he likes to push it, it seems.

Back at the house, Ramona (the creepy girl ghost) is worried about them all leaving and Sally has decided to make it her mission in life to save her. Partly because she knows what it’s like to be trapped in the house and partly because she doesn’t have a life to move on to, unlike the others  who are kind of moving on. Sadly, no-one takes the opportunity to remind her that SALLY INTERVENTION ALWAYS ALWAYS ALWAYS GOES WRONG! But Aiden will help because he’s totally not leaving without newly found true love Sally

Ramona disappears which everyone writes off as totally fine and not even slightly ominous, honest.

Josh and Sally pack and Josh looks for boxes for his things – and Nora says he can totally use hers. The big subject – is Josh moving in with Nora – is finally addressed. He doesn’t want to assume, seems to accept the awfulness of what happens and even if Sally’s little possession cure worked, he doesn’t know that for sure and understands Nora not wanting to risk this. She still wants him at her flat so they can start married life together

And in the basement after much dancing around the subject and Sally lamenting the fate of some tights, Aidan invites her to come with him – to haunt him. Ramona seethes upstairs in her room all alone.

Like any set of room mates leaving a place, they argue over communal property which is delightfully normal (why does Aidan want a coffee maker and cookware?) I love the bickering, yes yes I do. They’re arguing over a really ugly statue too.

Beatrice, Ramona’s sister shows up to double check if Aidan REALLY saw her ghostly sister. Because there’s a problem with that – see her parents were sort of devil worshippers and they summoned a big bad demon called Haymen (as you do – this was before the internet. People were much much more bored). But they needed a sacrifice. Luckily they had twins – one of which, Beatrice, they named and raised as a daughter. The other they stuck in a secret room and shut them off from the world (Beatrice named her) until they were 10 and Ramona just disappeared after another demonic party.

Ramona appears and Beatrice can see her – something Ramona puts down to them being twins. Problem is that Ramona blames her sister for her death, for not stopping it and, despite Sally et al saying otherwise, she’s not in a forgiving mood. She kills Ramona then spookily announces “she’s not part of our game.” The gang runs being not entirely stupid – but upon passing through the front door, they’re all teleported to different rooms.

Even Sally? And you’d think ghostly powers wouldn’t work on a ghost, especially a ghost with witch woo-woo.

Each of them faces something bound to cause lots of angst. Aidan is locked in with Henry – his vampire child who died from the virus – who is now a ghost (impossible since vampires can’t become ghosts). Sally is locked in the bathroom with Kat (Aidan’s ex who rejected him when he showed her his vamprieness) who says she can see her and isn’t happy. Josh gets Julia, his ex-fiancee who died when she saw he was a werewolf. Nora gets Emily, (Josh’s sister), who is drinking.

Aidan, confronted with a vampire ghost, sees a possible vampire afterlife which is a mixed blessing because over the years the only reason he hasn’t committed suicide is because he didn’t think he had an afterlife waiting – and Henry thinks Aidan should join him in order to save the future people Aidan will inevitably kill. A stake appears. And if he commits suicide… Aidan can be with Sally.

Emily tells Nora how terribad Josh is and how he’s ruined everyone’s life. A journal appears supposedly documenting Josh’s continued inability to control his wolf, the rage and the urge to kill. Emily also throws in the big surprise that Nora is pregnant – and she can’t protect her baby from Josh.

Kat wants to tell Sally how impossible a ghost/vampire romance is and how much better she is for Aidan.

Julia tells Josh how out of control he is, how the wolf is taking him over, how dangerous and savage and murderous he is and she claims she can see the future and the only way he can save Nora from himself is to kill himself, he spreads too much misery and pain to live. A silver knife appears.

Sally twigs that this is Ramona’s little game – thankfully early before I start screaming at people for falling for the obvious. She confronts Ramona and adds she’s a more powerful ghost – but Ramona claims to be more than a ghost – and to actually being the house.  She thrives on chaos and carnage and she absolutely loves having Aidan and Josh in the house because they’re carnage gold. Now they’re trying to leave she’s going to take everyone out with a final burst of death.

Sally teleports in to Nora to warn her about the hallucinations. She does an excellent job of snapping Nora out of it and sending her to Josh while she goes to Aidan. She makes a tearful appeal to Aiden not to leave her – and he drops the stake

Josh’s hallucinations ratchet up a notch to seeing Nora’s body with a slit throat and the blood stained silver knife in his hands. He falls to pieces and points the knife at himself – when real Nora comes running down. She touches him, proving she’s not a ghost, and he drops the knife.

They leave through the back door – and all end up back in Ramona’s hidden room. Sally explains things and smugly adds that no-one there would kill each other because their bond is too strong. Which is when Kenny arrives. Ramona let’s Aidan out – but only Aidan

He goes to Kenny who demands the truth. Aidan tells him – and Kenny is angry about Aidan choosing Josh over him, about lying to him, betraying him and generally how he has to kill Josh now to honour the dead Astrid (Aidan really should have included the “held Nora at gunpoint” part) and to do that he has to kill Aidan – and he draws a stake.

They fight and Kenny is clearly winning (I seem to remember the deformed vampires like Kenny were stronger than their counterparts), demanding Aidan admit was a bad dad he has been, pointing out how hard he tried to work for Aidan’s approval. But in the fight they ram against a wall – and the stake goes into Kenny’s heart – Kenny says he’s happy, he lived longer than he expected to… but manages to add that Sally is gone, truly gone and it’s all Josh’s fault before crumbling to dust.

Of course Josh decides to head down when he hears Aidan crying and yelling, now the door is unblocked. But Ramona blocks Aidan from seeing Sally and, in the ashes of his son, Aidan blames it all on Josh; Sally remembers the scene from when she saw the future, when Aidan killed Josh by breaking his neck. We see Aidan grab Josh’s head…

I like Josh and Nora’s conversation about Josh moving in – I like Josh’s seeming understanding of how terrible what he did was. I like that he understands it’s entirely Nora’s decision and it’s not to him to talk her into it and I like that he makes it clear that even if he feels cured there is a risk – rather than burying it to get what he wants. Of course, I don’t like the risk in the first place, or that werewolf-can’t-help-himself-rawr is actually such a common thing in the genre. But at least werewolf-can’t-help-himself-rawr is presented as something awful that he better try to help and that Nora is perfectly reasonable if she wants to walk out and never see him again

I wonder if the moral quandary of the fact that Aidan and, to a lesser extent, Josh ARE dangerous and probably will keep killing was intended? The arguments Ramona made to both of them to push them to suicide are… compelling. Especially Aidan’s.

I also kind of like Sally thinking she has to snap her housemates out of it –and instantly goes to Nora. She knows which of them are most likely to hear sense and snap out of it quickly.

I was impressed how they made the last minute nature of Ramona fit with her storyline – but much less so by Kenny’s “Sally’s gone, it’s all Josh’s fault” being sufficient to drive Aidan over the edge… no that doesn’t make the slightest sense.