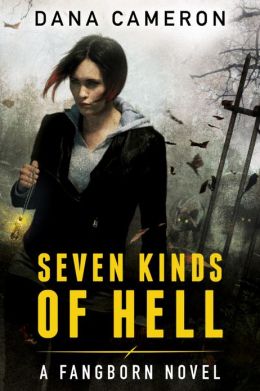 Zoe Miller knows that she is different.  Having discovered that she is a werewolf,  Zoe will do anything to keep it from the people she loves.  If that were not enough for one young woman to deal with, Zoe and her mother are being pursued by her father's people.  This causes Zoe to spend most of her life on the run. Things come to an head when Zoe's mother dies and her cousin is kidnapped.  Suddenly, Zoe is forced to confront the supernatural world that she has spent her entire life running from.

Though much of this book is concerned with the pursuit for Pandora's legendary box, Seven Kinds of Hell is largerly a thriller.  In some ways, it reminds of The Da Vinci Code or even Indiana Jones but unfortunately,  not nearly as compelling. Part of the problem is that there are too many characters, who then repeatedly change sides. This is thrown into a world in which we are given little information about.  However, in Cameron's defense, this is because the story has a first person POV and  Zoe being a mutt, doesn't know anything about the Fangborn family she was born into. Unfortunately, this gives the book a lack of cohesion.

I started out completely committed to finding out where this story was going but by about 1/3 of the way through, I found myself not really caring. Seven Kinds of Hell became a book to finish because I started reading it and not because it is compelling.  I just found that I couldn't connect with any of the characters and therefore could not invest in the story.  It took me much longer to read than it should have.

Seven Kinds of Hell absolutely passed the Bechdel test.  There are several strong characters, including a female protagonist.  In many ways the male characters feel very much like a supporting cast.  The real problem for me is Zoe. I don't understand why she chooses to stay behind after her mother died, thus leading the enemy straight to her loved ones, after spending a lifetime knowing that the best option is always to run. It feels extremely out of character for her.  Considering that this happened at the very start of the book, it most certainly is a problem.  We are told that Zoe is willing to do anything to save the people she loves and yet she easily ditched Sean.  Why?  Yes, he has been messed with but how was he not in danger?

We don't really learn much about the other female characters because they seemed to exist solely to inform Zoe about the world and pull her butt out of the fire.  That said, even an important character like Will didn't get a lot of characterization.

In terms of race, Seven Kinds of Hell is erased.  This is disturbing because Seven Kinds of Hell takes place in various locations.  In terms of sexuality, there ware no GLBT characters.  Cameron did however include a gay bashing that served to make Zoe aware that she could sense evil.  Yeah, thanks for that. The oppression and pain of a marginalized person used to edify the straight protagonist is beyond problematic. Cameron also had Jenny deny being a lesbian in a refusal to interact with two men who were interested in her.  This is not inclusion and the last incident is homophobic in my point of view.

Where Cameron did get it overwhelmingly right  is when it came to class.  Due to being unable to set down roots, Zoe grew up extremely poor.  We see this with her limited possessions, taking 6 years to get her B.A., as well as her recognition that food is a resource not to be wasted.  Zoe notes her fellow students would turn their nose up at the offerings but she sees this as an expression of the class differences between them. What's important when you are poor is not how the food tastes, or even the quality, simply that you have enough to eat to survive.  I believe Zoe's poverty and Cameron did a great job of showing how it effects her life and how people see her.

In my opinion, Seven Kinds of Hell went on one chapter to long.  Clearly, Cameron wanted to hook the reader on a second book, but it felt extraneous.  That said, I cannot say that Seven Kinds of Hell is over written in any other way.  The largest problem is too many characters, and the flipping allegiances. I wanted this story to just reach out and grab me and instead, it's convoluted nature ended up pushing me away. I would be willing to give the second book a shot however because I see great potential in this story and the idea of Pandora's Box fascinates me.