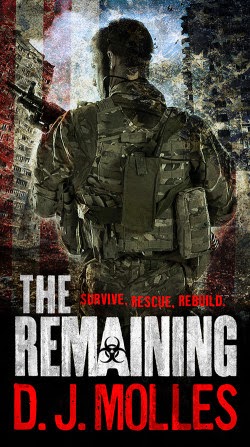 Lee is part of a secret government project to be deployed should the worst happen. Whatever that worst is. Whenever a crisis hits the US, he and his fellows go to ground in their bunkers to weather the storm and emerge in the aftermath

There have been many drills, many false alarms and Lee didn’t think much of the latest alert – a plague spreading that turned people violent and near mindless. No doubt it would be resolved like many before

And then the time stretched – and stretched. This is not a drill. Society has fallen, the US is devastated and it’s Lee’s job to pick up the pieces.

I love this concept, it’s a great new spin on an old concept. We’ve seem dystopian, post-apocalyptic worlds. We’ve seen any number of survivors struggling to live and learn in the new world they’re presented in. We’ve seen them make the hard choices, having to set their moral lines, we’ve seen them be totally unprepared.

But this? Someone who has been prepared for exactly this scenario. Someone who has the supplies and skills for a zombie apocalypse and is ready to take it on. It sounds like it would make for a simpler story – after all, the struggle to survive becomes so much easier. Which is true – but it’s a whole different dynamic – because Lee has a mission. In other books the survivors battle hard choices on moral lines, whether to save or trust other people and focus on living. Lee can’t do that – he can’t decide not to save people, he can’t just focus on his own survival. His job is to put the country back together. He has been prepared and supplied to restore order and civilisation – focusing on daily survival alone cannot be his priority. Not reaching out to people not taking the risk in trusting people, not saving people are all things he cannot do – not unless he’s willing to abandon his mission entirely. It’s a fascinating new dynamic and makes for a very fresh story against a very familiar background.

We still have a lot of the standard themes of a zombie apocalypse – watching friends and loved ones becoming monsters, having to make the decision to put them down, facing the slow degradation of someone you know slowly deteriorating, roving bands of marauders and gangs exploiting the break down of order to take whatever they want – and they’re all really well done. But Lee’s mission colours everything and adds a new angle to all of these well portrayed and familiar themes.

My main criticism of this book is that it feels short and it feels unfinished. I think we had an introduction and the story was just really starting when the book ended. We had a lot of really well written action scenes – but they were also very long action scenes. A lot of this book is devoted to combat, preparing for combat, travelling, some more combat with some exposition thrown in. None of it is bad, none of it is long winded, none of which I’d say was boring to read by any stretch… but it didn’t leave much room for anything else. Particularly developing the new angle this book brings. I was getting all excited about where the book was going…. And it stopped. I looked down at my tablet, flipped back and forth a few times in a semi-disbelief because it ended just as it was getting going. It didn’t even end on a particularly natural conclusion point, I had to check to make sure I hadn’t managed to lose half the book somehow.

There’s another element we’ve talked about in dystopians before as well. Lee picks up survivors, people who he rescues, people who need him for protection. They’re women, children and children who are POC… who are dependent on him for leadership and protection. This doubles down on the trope because Lee has been so super-prepared for the dystopian and these dependents are ill and/or children, emphasising how helpless they are

I’m not saying they’re bad characters – they aren’t and they show levels of competence and skill you’d expect from people who have survived a few weeks in an apocalypse – but Lee is their saviour. It becomes more glaring when the one white man he meets who isn’t an enemy is also ex-military, capable and dangerous - a peer, in fact.

And the zombies ate all the LGBT people first again.

There’s also a lot of anti-Arabic slurs thrown around not just from gangs of thugs but also from ex-military guy – is it really necessary to throw them around every time we see a soldier in fiction to prove their “authenticity”?

I can almost guarantee I will love the next book – because I was really liking this one before it just ended on me! The introduction has been set, the world placed, the characters shown – now bring on the full story! I want to see where it goes from here and will definitely be picking up book 2. I have problems with inclusion and I definitely have a grumble about the story ending just when it was getting good – but that getting good means I am on board with this series and want to see what comes next.