Resurrection, Season 1, Episode 4: Us Against the World 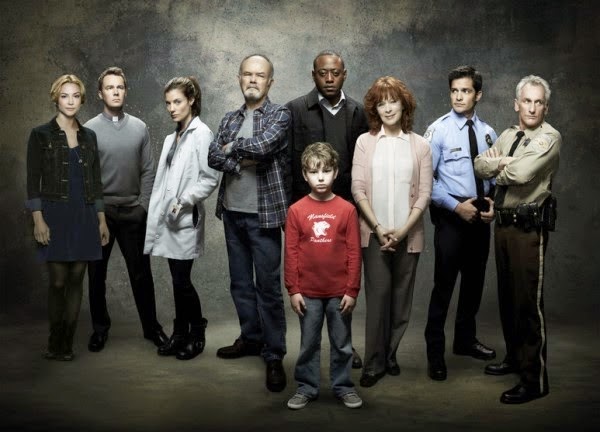 Caleb adds further credence to the fact that the Resurrected never sleep by doing DIY well into the night. Elaine comes out and they have a wonderful father-daughter bonding moment which more than suggests that as he gets more evil, poor Elaine is going to be his defender.

Martin, Maggie and the-always-unpleasant-Fred (who is, to no-one’s surprise, unpleasant) examine the body Martin found; blunt force trauma is the cause of death. Martin tells Fred his theory – Caleb robbed an armoured car way back in the past and buried the money at his hunting shack (where Martin and Maggie found the mask), having a heart attack and dying in the exertion. The dead man, Dale Getheard, found Caleb dead and helped himself to the money. The newly resurrected Caleb dug a hundred holes looking for his money before tracking Dale down and… expressing his disappointment. This exposition has been brought to you by the Investigators-With-Uncannily-Accurate-Theories-Trope. Martin adds that he saw Caleb yesterday washing a hammer. I’m not a very handy person, but I get the impression that washing hammers is not something one commonly does. Unless it has blood and brain matter all over it, anyway. Because that’s just not hygienic.

Fred agrees to talk to him but both he and Maggie have doubts – Caleb’s not a pleasant person but murder’s a bit of a leap but Martin raises the possibility that being zombied has affected him.

Pastor Tom is having further angst from newest resurrected, Rachel, newly arrived from a cornfield in New York. She’s been dead 12 years and seems quite devastated that he’s married. Rachel is also a suicide. She asks him not to tell anyone and he agrees – except his wife

Which means first he has to tell his wife that he loved another woman before meeting her and that woman killed herself. Which is a big reveal in itself – but adding she’s back and stayed the night really beats that. His wife, Janine, isn’t 100% happy with this even as Tom insists he’s a different person from the man he was 12 years ago. She wants rid of her.

It has to be said, playing hostess to your husband’s previously-unknown zombie ex is going to put a strain on most marriages.

It’s a sleepless night for just about everyone in the Langston household, made worse by kids peeking in Jacob’s window to look at “the ghost boy” – lots of drama and minor epileptic seizures. Lots of conflicted angst from Henry. The next day they call in Maggie to give him a check up and Lucille brings up some other worries – Jacob isn’t sleeping at all and he is eating constantly.

Henry tries to make his peace with Lucille about the rather appalling thing he said to her last episode; but she’s not just taking an apology as sufficient. She tells Henry he needs to let go – it’s not a sign of not loving him, it’s healthy grieving. Henry’s also still not ready to accept Jacob.

At the church, nasty little busybody Helen is outraged that there’s a broken window in the church (where Rachel broke in) and since Pastor Tom was heading to the church basement, she decides she absolutely has to see what’s down there. Can some of these dead people start eating brains and kill this woman please? Rachel has disappeared though – and Tom sets off to look for her while being all mopey with angsty memories.

He finds her at one of their old places. She doesn’t want to die – but she does want to be with Tom. He’s hurt because her suicide hurt him badly – she makes unclear comments about how she “fell short” over and over again – but still wants to spend the rest of her life with Tom. And Tom? Tom was all set to kick her out for the sake of his marriage – but now can’t abide to lose her again.

Martin and Fred go to see Caleb and get Elaine and Ray instead. Elaine doesn’t believe her father could ever be involved in a murder – but his gun is missing. Back at the police station they check through the armoured car robbery case and find the robber used the same mask and shotgun that Caleb used; and that, since Elaine worked in the bank, he could have stolen her files to find the armoured car’s secret schedule.

And Caleb pulls of exactly the same trick, same gun, same mask with an armoured car at the same bank right then. Only now the security company has put a third man in the armoured car (a change in policy after Caleb knocked one of the guards out in his first robbery). Caleb shoots him.

Fred and Martin arrive in the aftermath and Elaine desperately calls home to see if her father is there. He is – but before she can be reassured he tells her he has to go away… on some unspecified business. She’s still in denial. But at home, Ray has made a phone call – Caleb asks who to just as they hear sirens. Martin and Fred arrive – but Ray tells them Caleb has gone; though Martin and Fred suspect he might not have left town.

Elaine talks about her conflicted feelings about her father with Maggie when Martin and Fred arrive to question her. But she can’t understand her father using her that way.

Maggie finishes Jacob’s test results, and having no medical ethics, she passes on to Martin that he has a super-metabolism and doesn’t sleep. The same thing that Caleb has. Lucille panics a little, horrified at the idea that anything about Jacob may be different from what he was. Maggie agrees to take him out for ice cream and try and get him to open up to her about any problems – which doesn’t work well. But Jacob’s dead-sense picks up Caleb as they’re driving through town. Which reveals he has creepy dead senses.

Maggie goes to the police station and tells her dad, Fred (who has just had to calm down Gary, a man who is a relative of the murdered Dale).

Caleb is hiding in the abandoned factory where Jacob said he would be when the police come charging in sirens blaring (Martin with them). Caleb doesn’t have a big firefight – he actually surrenders to the police and is cuffed. I didn’t see that coming. He does ominously say “it’s just beginning” though – and the storm starts so you know it’s meant.

I think this show is striking an excellent balance. The meat of this show will always be the character development and the emotional connection: Lucille and Henry trying to deal with each other and the returning Jacob. The town’s rejection of the Returned. Tom’s conflict both over his flock’s rejection of the Returned but now his returning suicidal ex he still loves – and damn if that isn’t a meaty, complicated issue to digest!

Yet, at the same time, following that too long can leave the story somewhat flabby. So we have the action of Caleb’s little shenanigans and the developing mystery – the Returned’s ability to sense each other. The fast metabolisms, the lack of sleep – they’re adding more to the mystery even if we don’t have answers

As the action and the mystery develops, though, it will be interesting to see how they balance the personal stories. Whether they remain relevant or eclipsed and distracting.

I’m glad to see that Fred is overcoming some of his hostility as it allows Martin to be more directly involves rather than having to run the mindfield of Fred’s cantankerousness (and that’s what it comes off as. I keep waiting for him to yell at people to get off his lawn, dagnabbit!)