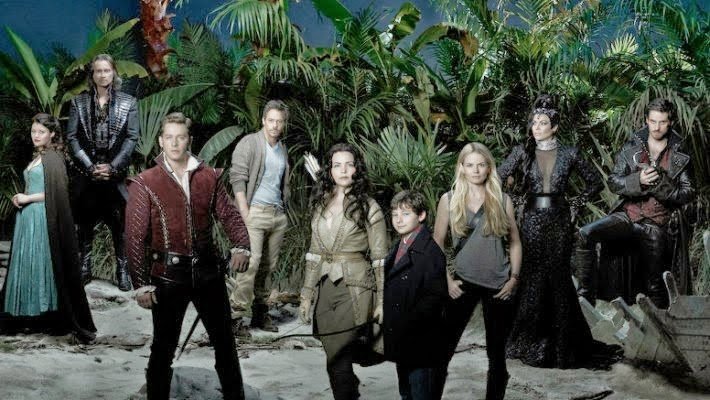 Zelena collects another ingredient for her spell – the gold the Rumple spins she turns into a golden brain which she adds to her box – representing Rumple’s mind. Now just one more to get…

Mary Margaret is rushed into hospital in labour. Regina and Emma casting a protection spell around her hospital room. Hook tries to join them but Emma is still not happy with him for not telling her about his cursed lips. But David insists Emma take Hook for back up if she’s going after Zelena (Emma makes an unnecessary dig at Hook’s hand – hey, yes, Hook is one handed but he’s also extremely competent fighter. By all means point out her doesn’t have magic, but his lack of a hand doesn’t make him less of a swordsman). David insists that she at least take Hook as cannon fodder. Poor Hook. Emma makes her goodbyes to Henry and off they go.

Henry is promptly farmed off on Archie and after a reunion moment it seems Henry is looking for apartments having already planned their life – the house is too crowded for all of them and the new baby, he’ll be zipping between Emma and Regina but Emma needs a place. Archie thinks he should talk to Emma, especially since he’s assuming Emma will keep him in Storybrooke or, as Henry puts it, home.

And a Flashback – Zelena in Oz, taking over the wizard’s castle, bitterly stalking Regina and Rumple through a scrying pool. Glinda pops in to see her – she’s actually quite happy about the Wizard of Oz being turned into a winged monkey since the man was a charlatan. She wants to distract Zelena from her little obsession.

In the present, Zelena forces Rumple to lay out her spell – but he still thinks she’ll fail because even if she changes time she won’t change herself.

Hook and Emma argue as they walk about how Emma feels manipulated into letting Henry having his memories back and how happy they could be in New York while Hook points out that their live in New York was a complete lie. Hook forces her to confront what worries her about staying so much and skewers the idea that it’s all for Henry’s sake.

Unfortunately they’ve made the classic television mistake of focusing on their personal drama rather than Zelena and Rumple who sneak up. And it doesn’t matter how magically powerful Emma is, Rumple is still the trump card and he throws Hook into a pool and holds him under water. Emma tries to pull him out rather than fry Zelena which isn’t very effective.

Flashback time – Glinda takes Zelena to a council of witches, along with North, East and South, they represent courage, love and wisdom (behold conspicuous empty chair). Together they’re more powerful but still can’t travel through time. They want her to take the West seat – Innocence (ha!) and want her to reclaim her goodness. Also their special prophecy book says the land’s protector will be brought to Oz from the West by Cyclone – which sounds a lot like Zelena. But she has to let go of her past – yeaaaah not likely

Zelena tries to let go of her past and in the 5 minutes she tries, Glinda decides Zelena is cured! She gives her the super powered pendant (which is now her life – since it makes you immensely powerful but also strips your powers if you don’t wear it). Are we sure Glinda isn’t the “Innocent” one? But it seems to work, Zelena has let go of her envy and her skin returns to its usual colour.

To the present and Zelena and Rumple wander off so Emma can pull Hook out of the water. Of course, he’s drown so CPR is needed – which means her lips touch Hook’s. The flaw in David’s reasoning (David’s reasoning has a flaw? WHO COULD HAVE GUESSED?!) Cannon fodder is only cannon fodder if you don’t care if it dies. The curse hits – but at least Emma has super-duper-awesome CPR skills and needs on breath only to bring him back.

Why not drown Emma in the water? Or stab her? Or turn her into a quaint garden ornament? Wouldn’t that work? No?

Anyway, Zelena and Rumple charge the hospital and their defences and defenders just fail dismally. The dwarfs, the Merry Men, Belle, Regina – all fall quickly before Zelena carrying the Dark One’s dagger.

Flashback to Zelena’s dreams falling apart, again. Glinda takes her to the West, her realm, when they see a Cyclone. Which drops off a farm house – and Dorothy. A special powerful girl coming from the west via Cyclone. Oopsie. While the 3 witches are welcoming to Dorothy, Zelena starts to turn green again, especially since she’s read the book and seen the bits Glinda missed out – like how the Witch of the West is supposed to unseat a great evil. She sees Dorothy unseating her; Glinda warns her that if she sees herself as evil she will become evil.

In the hospital, Mary Margaret gives birth to her baby boy – and Zelena breaks into the room – and takes him. David, Mary Margaret and Frankenstein can hardly stop her.

Great now Mary Margaret will take to her bed for a month.

The whole gang gathers and Emma tells them that she has no magic. Without her magic they can’t beat Zelena – but Henry tells Regina she could do it. Regina repeats she can’t match Zelena’s magic but Henry says that’s because she’s throwing dark magic at Zelena. She broke a curse with True Love’s kiss – that’s Light Magic. Henry and Robin are confident of the love in Regina; that she can be a hero not a villain.

Flashback – evil Zelena confronts Dorothy. She decides she’s going to kill her and end the threat for all – she calls a fireball. And Dorothy throws a bucket of water at her. Which causes her to melt. Dorothy panics and calls Glinda but she just stabs a big destiny stamp on everything (got to love that. “Your well is full of highly corrosive acid!” DESTINY EXPLAINS ALL! It’s also a really crappy prophecy “will defeat greatest evil with accidental drenching!”) and they go wandering down the road to take Dorothy home since she doesn’t want to be the Witch of the West

Zelena, not one to be too long bothered by Destiny Charged Water.

Zelena has finished her spell – David’s Courage, Rumplestiltskin’s Wisdom, Regina’s Love and The Charming’s super-Innocent baby. She brags how Rumple will choose her this time while Rumple is equally sure he will find Zelena and kill her.

She begins her spell and the good guys arrive. Battle begins and Rumple hisses at Emma and Hook that they need to get the dagger or he’ll just kill ‘em all.  The gang can’t really do anything because Rumple keeps throwing them into conveniently placed hay bales. Zelena and Regina face off. Zelena holds Regina by the throat – and Robin manages to grab her heart. Regina calls light magic to her hands. “what are you doing?” “Changing” and she throws Zelena across the room

Fear not, she may be good, but Regina still has the best one liners.

In her plummet across the room she drops her dagger, freeing Rumple. Regina follows it up by ripping the gem from Zelena’s throat, shutting off her magic and closing the portal.

David poses dramatically with his sword. He doesn’t even get to slice off the head of the Flying Monkey since it transforms into Little John. Oh David, keep pretending to be relevant.

Regina mocks Zelena, she’s failed and not going anywhere. Rumple objects, he has a GRUDGE, oh yes he does. Before he can get in some much deserved epic vengeance, Regina grabs Rumple’s dagger and stops him. Good magic doesn’t exact vengeance. Rumple protests that she killed Neal but she counters with the number of lives they’ve both ended to get what they want. Heroes don’t kill.

Flashback to Oz and Dorothy (really? Screw Dotty, get me back to Regina!) and the newly reinstated Wizard of Oz (free after Zelena’s magic fell). Showing how little Glinda really cares about the Wizard of Oz being a charlatan. He sends her home with golden slippers (hey, why no ruby?) and Dorothy buzzes off. But then the curtain comes down revealing Zelena. She set up the whole ruse of the water in the first place so Dorothy would leave and now no-one can stop her. She banishes Glinda to the Enchanted Forest, with a wave. So much for Realm hopping being hard.

In Storybrooke, Zelena is in a cell and Regina sympathises with her – Cora ensured she wouldn’t get the live she wanted, the life she thought she deserved as well. Zelena doesn’t get it of course, but Regina thinks she tried the same thing, she failed – and got a second chance. So that’s what Zelena will get. “Evil isn’t born, it’s made. And so is good.” Create a new destiny or Regina will take her heart and crush it. She puts Zelena’s gem in her vault.

Belle and Rumple meet up in his shop for a happy reunion and her eternal faith in him. Regina gave Belle the Dark One Dagger and Belle gives it to Rumple because she has faith in him. And he gives her it back – just as she trusts him enough to have the dagger, he trust her enough to have the power to control him. He asks her to marry him. Of course she says yes.

The Charmings have a big reunion, Emma has a moment with Hook – but her magic hasn’t returned and she’s still planning to go back to New York.

Ahh but not so neat. See Rumple visits Regina and reveals he gave Belle a fake dagger. He promised his son revenge and Rumplestiltskin never breaks his bargains. He turns Zelena into pottery and shatters her. This turns her to dust

Which turns to green vapour – along with the pendant in Regina’s vault. The gas goes to her ritual spot – and the portal appears to open.

Regina! REGINA! REDEMPTION WE HAVE IT! White magic, her heart being the pillar of love and Regina even stopping Rumple’s epic vengeance on Zelena (awwwwww). Coupled with an acknowledgement of their own past – that “how many lives have we ruined to get what we want”?

I think we need a Regina party dance!

Emma is annoying me though. SHE feels manipulated into giving Henry his memories back? She was willing to let someone’s past be erased for her own idea of what life should be but she is the manipulated one? Seriously? She was willing to manipulate events to keep Henry ignorant of his past, of his family, top use that to pull him away from Reagina, his grandparents, from even knowing his dad existed, from all the friends he’s made – there’s some outrageous manipulation.

The witches’ table… ok… Love? Yes I’ll go with that (compassion or empathy would be better). Wisdom, no doubt. Courage, yes pretty set. Innocence? Not guilty of crime/sin? Naivety? Not seeing it. Justice? Yes I could see justice (though I think wisdom and compassion combined with courage make justice). Or conscience (though empathy/love, wisdom and courage are all parts of conscience). But innocence?