The Originals, Season 1, Episode 21: The Battle of New Orleans 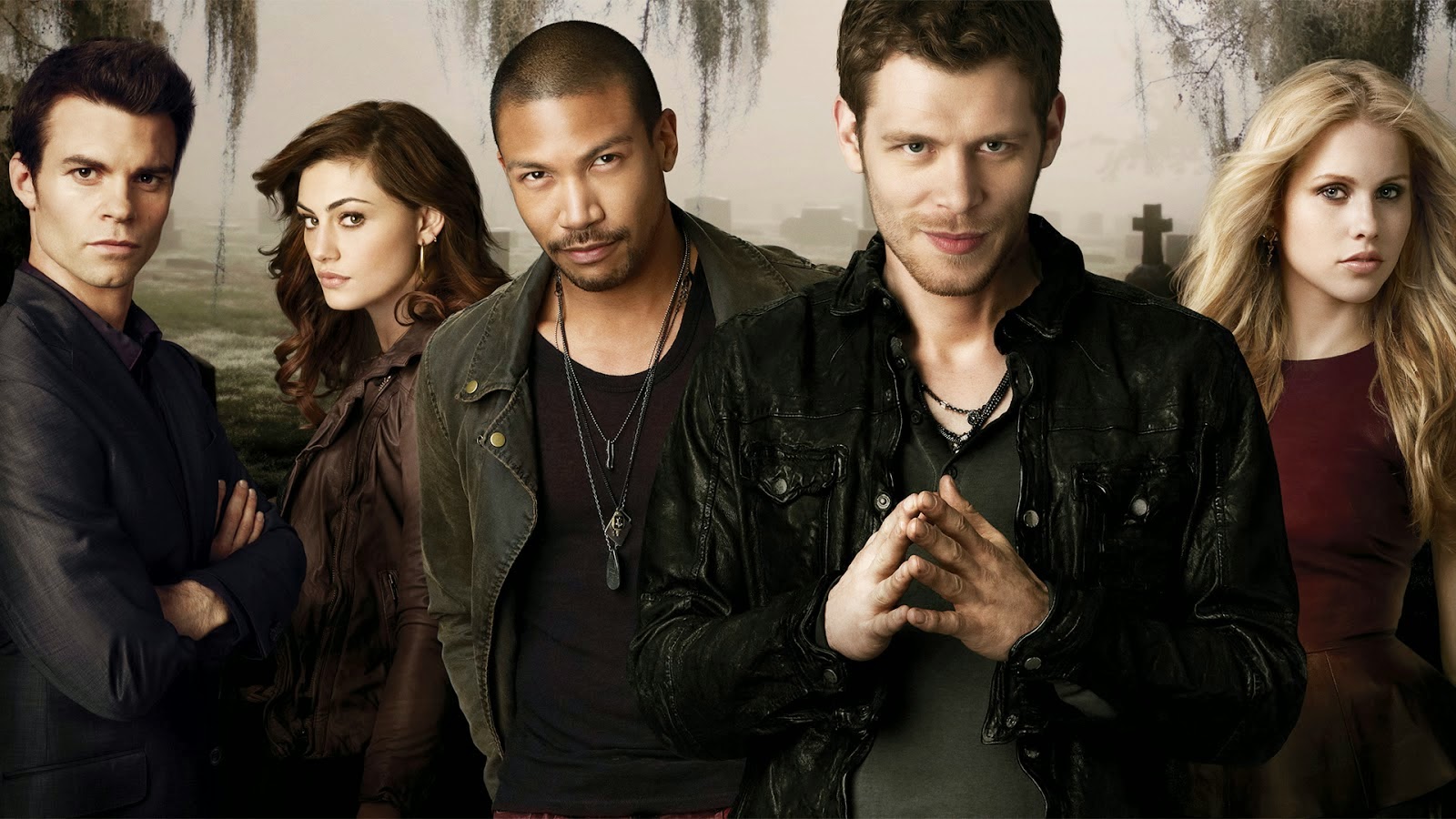 Jackson and Oliver have collected a load of rocks that seem to be for Klaus’s moonlight rings and Jackson finally snaps at Oliver for constantly harping away about Hayley – when they run into a police road block. One created by Marcel and Diego.

Josh is hanging around with Davina, being a good GBF and being all reassuring of Davina’s doubts over making Marcel a cloaking spell and seeing Klaus’s ghostly daddy everywhere.

Genevieve marvels over Klaus’s mother’s spell (given that Klaus’s mother created vampires I think “gifted witch” is an understatement). The whole spell will stop wolves turning on a full moon, still leave them strong and fast and keep them with venomous fangs. Klaus… this sounds like a very very very bad idea. Even Genevieve is concerned when Klaus up his order from 1 ring to 100 rings – she objects and adds she isn’t his servant because they sleep together (oh Genevieve, you should know Klaus better), but Klaus offers her the entire grimoire in exchange for the rings. That’s…. also a really really bad idea. She realises Klaus is building a werewolf army (you think?) but Klaus brings up the fact Genevieve’s coven expects her to sacrifice herself – and he promises to protect her.

Klaus, did you brain switch with Elena?

At Camille’s bar, Francesca arrives complete with goon to clear everyone out and demand Camille hand over the special key. She has a day in which to do it. Camille goes to a property her uncle had and behind a not-very-hidden panel in the cupboard finds a whole hidden room full of files and weirdness.

Marcel asks his captured werewolves what they’re plotting with Klaus and, since they’re carrying lots of spell ingredients around with them “we’re not” is not a very convincing answer.

Klaus, Elijah and Hayley have noticed the absence of the wolves and guessed that Marcel is behind it – the vampire who they just keep forgetting to kill. And since Marcel has a spell from Davina (Klaus knows from Genevieve) he just needs leverage to use against her – yes Josh, you’re a tool and victim again, such fun (wondered why he appeared again, he does generally only show up from his plot box when useful). Klaus bites him – with his nasty vampire-killing hybrid bite. Davina tells Klaus where Marcel is.

Genevieve and Hayley worry – the main point of this is for Genevieve to tell Hayley how super special she is with her super special womb of specialness.

Elijah and Klaus find Jackson tied to a bomb (which Klaus is thoroughly indifferent about, being more focused on the stones). The explosives also seem to be the same as the ones used on the attack against the werewolves in the bayou which Marcel claimed to be innocent of. Klaus randomly open boxes triggers the many many bombs.

Being Originals, this comes under the heading of “mild inconvenience” rather than life threatening attack. They even manage to rescue Jackson. So Klaus resorts to his backup plan – call Francesca and have her deliver a bag of the stones (she and her family being organised crime means she can find odd items at short notice). Which now means Francesca knows their plans – Elijah, being the only person with a  working brain today, questions why Francesca is so happy to get on board with the whole werewolf army plan. She also wants to bring her people in Klaus’s compound to protect them in case Marcel attacks. Klaus agrees

Klaus has definitely had his brain swapped with Elena’s.

Jackson acknowledges how Hayley is doing everything for his clan (and it’s Hayley not just her special baby, even if her special baby is what gives her leverage over Klaus to make things happen) and he grudgingly accepts he owes Elijah. And Hayley tells Elijah that her family betrothed her to Jackson. To which Elijah is… understanding and noble, which Hayley finds slightly irritating. I have to agree – though a rampaging Original is not a good thing, someone throwing that much nobility at you all the time can get aggravating. When she complains about it, he kisses her.

Genevieve continues her spell, needing the blood of a werewolf who doesn’t turn (she suggests Hayley, but Klaus puts himself forwards… is it really a good idea to give a witch your blood?).

Marcel makes a big speech to his people about having to stop the werewolf army and how he was wrong to stop his last attack on Klaus (eerr.. you stopped that attack because Klaus was single handedly massacring all your vampires.) The speech goes on for a very long time and is kinda comicly ridiculous but everyone agrees. His plan is he will lead Klaus away and the rest of them overcome Elijah, kill Genevieve and burn the grimoire.

Hearing the attack is coming, Francesca and Hayley stay with Genevieve

Marcel confronts Klaus – every vampire is here, Klaus will have to kill them all. Klaus: “ok”. Marcel’s plan “works” in that Klaus chases Marcel while Elijah plays with Marcel’s army. Klaus decides to play with Marcel rather than just killing him (aaargh, I hate it when protagonists or villains do this.) Marcel claims he got the bombs from Francesca – he would never bomb the bayou and he isn’t a monster (says the vampire – and why are we expositioning and not killing?)

Meanwhile Camille follows her uncle’s research and finds that Francesca’s family are werewolves – the Guerrera wolves that Marcel boasted he had wiped out who were far worse than Hayley’s Crescent Moon clan.

At the compound, Elijah is having so much fun with the little vampires, and Francesca and her family wait until Genevieve finishes the rings (Hayley doesn’t answer a call from Camille). And gives the stones to Francesca – they’ve been making a deal behind the scenes. Francesca slits the throat of her bodyguard, triggering her werewolf curse. Genevieve spells Hayley unconscious but she looks all angsty with it.

Klaus finishes mocking Marcel and bites him (whyyy not rip out his heart) but finds Marcel has had his blood cursed by Genevieve to do bad things (again, a plan that wouldn’t have worked if Klaus had ripped out his heart). Francesca hands out the stones to her family and they kill the bodyguards and activate the werewolf curse.

Elijah has brought down every last vampire Marcel brought with him (why don’t they do this all the time) but Francesca’s family leap on him and bite him – before they move around the incapacitated vampires and kill them except the few able bodied still able to run.

Genevieve reveals to Klaus what she’s done – she’s linked the rings to Klaus’ blood. When werewolves use the full moon not to turn, they draw on his power. She accuses him of never caring for her then taunts him with all he’s lost.

Mikael appears to Davina, who is running out of time to save Josh, and offers to help her if she will bring him back to life to kill Klaus (which will kill Josh anyway).

Oliver makes his way home to the bayou where he meets Francesca who he has been working with. He accuses her of the bombing – which should have been non-lethal – that killed so many of his pack, but Francesca calls it Hayley’s pack. And she traded Hayley to the witches to gain the stones.

Marcel enters the compound to find all his vampires dying from werewolf bites, including Diego. And a raging Elijah who has noticed Hayley missing. Camille arrives in time to stop Elijah killing Marcel and they all realise Genevieve betrayed them.

The witches take Hayley to the church where Hayley goes into labour. For some reason Monique believes Hayley, Klaus and Elijah won’t seek revenge against her…

Y’know, if I were Klaus and Elijah I think I’d be sorely tempted to just kill everyone and start over.

Normally I appreciate a good bit of plotting, but not when the plotting relies on so much foolishness from everyone else. There is no reason for Klaus to trust Francesca. No reason for Klaus not to kill Marcel in seconds and then return to the compound. Elijah even has concerned but he doesn’t act on any of them. And the number of times they’ve threatened Genevieve should really point to why she isn’t trustworthy

It was a masterful bit of plotting on Francesca’s part – but it only worked because Klaus wasn’t thinking. Which is, again, part of the problem with having protagonists as powerful as the Original vampires – it is only by having them be foolish, be too trusting or by playing with people rather than just killing them that you can preserve any enemies at all.