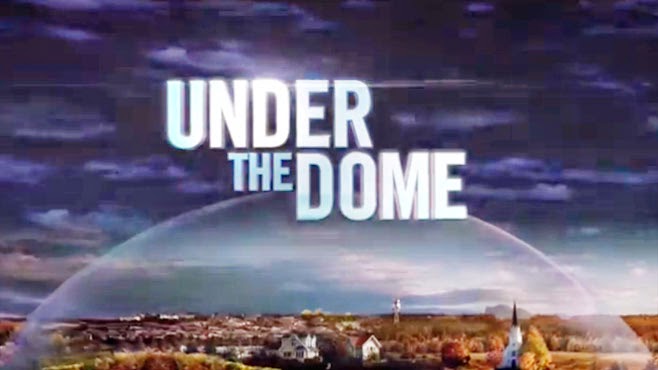 Domey Girl is still amnesiac and odd, Barbie is suspicious, Julia is all pro-Dome, Jim is creepy - now wanting to register all citizens. Jim is apparently friends with the barber, Lyle (and old love rival for his wife as well) and it sounds like Jim’s looking at Rebecca as more than a colleague. Run Rebecca, ruuuun! He seems to think the right cologne will do it… uh-huh.

The mandatory registration in the diner includes a written survey. There Julia meets Joe and Norrie and they discuss that maybe the whole “dome will protect us” is wrong, especially since one of the people who activated the mini-dome is now dead. Why they assumed positive motives on behalf of the Dome I do not know.

Rebecca drafts Joe, Norrie and Domey Girl into helping create windmills for power (potential friendship between Joe and Domey Girl makes Norrie jealous and sulky). Rebecca and Julia snark at each other. Oh can I be team Nobody? Team Jim and Team Dome are both terrible.

Meanwhile, Sam is trying to convinced James that there’s no way he could have killed Angie because he loved her. This shows us that Sam doesn’t know his nephew at all. Also, not reassuring is that James’s mother also had blackouts.

The town is all organised to gather rain in buckets, pots et al to help their water supply – but it’s raining blood. Well, extra nutrients, I guess? Except it burns like acid. Lyle decides that raining blood and swarms of butterflies is relatively close to the Biblical plagues. Lyle quotes scripture, Rebecca quotes science. Sam arrives and provides medical assistance. Gee Sam, that would have been quite useful in season 1 when people were dying and there were no doctors

Jim and Rebecca drive out to do stuff – with Rebecca bot explaining everything with science (quite well) while still having a peculiar faith in Jim. And he thinks he’s being tested – he’s developing  full blown messiah complex. While discussing whether Jim is the chosen one (yes, all of this is to test him), they swerve to avoid a hooded man in the road – and hit a tree. The hooded man grabs Jim and throws him out in the rain and drives off with Rebecca.

Anyway the kids in the school looking for windmill plans don’t know about the burning rain and run into James who is where Angie was killed trying to trigger his memory to see if he’s a murderer or just a kidnapper. More importantly, when Joe checks on of the school’s tablets he realises he’s getting email from the outside world, including a poignant email from Joe’s parents (which is sad and sexist since it expects Joe to take care of his older sister) while in a totally-casual-but-definitely-relevent-reference Norrie finds they’re trending on twitter and some group called HoundsofDiana is involved.

One of said hounds has sent James a message – a video that he can only watch by entering his mother’s birthday. It’s a message from his mother, Pauline, who isn’t dead – with an instruction to talk to Lyle, before cutting off. All the outside communication goes out – but the signal continues. While James runs off, Joe decides to go look for a source of the signal to see if they can reach outside the Dome again. Domey Girl comes with, Norrie gives Domey Girl the death-glare

The signal leads to the locker with Angie’s bloody hand print on it and Norrie snarls at Domey girl because AAAAAAAAARGLE. Domey Girl opens the locker (she knows the combination) but there’s nothing inside and the signal dies. Norrie rants at Domey Girl for knowing the combo – she says she just saw it in her heard. Joe just doesn’t understand why Norrie doesn’t just trust this completel stranger making impossible claims. Yeah Norrie, why?!

Thankfully the school keeps a truly ridiculous amount of records and Joe looks up everyone who has ever used that record ever and finds Melanie Cross in 1988 – who looks just like Domey Girl. Oooh a Dome mystery. How exciting.

Jim calls for help and, sadly, Barbie, Sam and Julia decides to respond rather than leaving him to die an agonising death.

Rebecca’s kidnapper ties her to a chair – it’s Lyle. I wondered why he suddenly appeared (he’s not worried about the rain because he’s convinced it spares the righteous. So says the man wearing a large rain coat).  But at least the guy realises that Jim is more self-righteous than righteous. But he then ruins it by pulling out 8 levels of completely out there-  the Dome is now a new god visiting plagues on the unrighteous. Of course. He’s also waiting for a rapture. Rebecca decides she simply can’t lie and promise not to stop the “rapture” so he decides he wants to baptise her in burning blood. Uh-huh. A dip of burning blood and she quickly realises the advantage of false conversion

Sam and Jim have a moment where Sam confirms yes he hates Jim but won’t let him die (alas) not yet (can I convince you to speed up your timeline).

Barbie and Julia do pointless things because the main goal is to show the growing rift between them – he thinks people are basically bad and when pushed to the limit that’s what they show except for a few good exceptions. Julia thinks the opposite. They do find a picture of Lyle, Sam and Pauline which is super suspicious because… I don’t know the music tells us though. Julia radios Sam to ask why he didn’t mention a 25 year gone relationship between Lyle and Pauline because that would totally have been relevant. James joins them and recognises where the photo was taken. Naturally a 25 year old photograph is a great clue to where Lyle is now.

And of course it works because AAAAAAAAAAAAARGH. Lyle puts a gun to Rebecca’s head forcing James and Barbie to disarm (Julia doesn’t get a gun apparently. And don’t tell me it’s because she’s not as qualified to use a firearm as James because I will laugh at you and mock you cruelly). Lyle recognises that Julia is also a true believer in the Dome (ok, admittedly, Julia isn’t exactly an ideal character to be holding a gun, but she’s still better than James) but she thinks the Dome that imprisons them and randomly kills tem for funsies in between dropping ACID on them is a good thing. While she talks having faith, Rebecca unties the last of Lyle’s terrible knots and throws a bowl of acid rain at Lyle and makes her escape.

Julia actually asks the kidnap victim who has been tortured with acid how could she fight against Lyle when he was ready to give in. Rebecca gives her a look she so richly deserves.

Rebecca applies SCIENCE to the lake which fixes the rain in seconds. At least she makes a point of claiming credit to Jim to make it clear she did it not the mystic Dome. Anyway, she, Jim, Julia and Barbie gather to discuss Rebecca’s worries about lack of supplies and her wonderful plan to kill off people so the population is low enough to be sustainable with Dome resources. Which is what the census is for – to decide who is worthy of living or dying

Julia storms off – but Barbie is willing to listen to a contingency. She’s furious and asks if these are his true colours – supporting genocide. Barbie isn’t willing to declare it off the table so she leaves. Rebecca keeps on trying to sell genocide to Jim – and she wants to start now. With Jim choosing who lives or dies – because the Dome says so (ugh, really)

Time for another Dome mystery no-one cares about – Sam visits Lyle in the prison and he’s annoyed because they have a 25 year old pact to make sure “what we buried stays buried”. Lyle decides the Dome breaks the deal between them. James watches the whole thing on CCTV. Because they have power enough for the CCTV.  To be honest, the only mystery I’m vaguely interested in is where Lyle got his vocal training because he’s not half bad. Aaand James goes to talk to Lyle and probably let him out

Ok, Barbie referred to “our” house. Since when is Julia’s house his? 2 week time line remember!

Then there’s Domey Girl and Norrie. Can we stop with the women-hate-each-other meme?

Oh and we’re resorting to genocide after, what, 3 weeks of isolation?

Hounds of Diana. Oh look, another Dome mystery. Honestly the Dome could fill with cyanide next week and nothing of value will be lost. And am I supposed to care about Pauline? And what is in the water of Chester’s Mill? Yes people can be a little odd in times of extreme stress, but in 2 weeks a substantial number of the town have completely lost track of anything resembling coming sense

This episode is brought to you by the highly praised, suspiciously common and prominently displayed tablets. I would say the product placement is pretty excessive, but I watch Teen Wolf (still waiting for adverts to be painted on Derek’s chest)

It has not been brought to you by Carolyn or Phil who have fallen down a plot hole.

Can you actually track the direction wifi is coming from with a tablet?