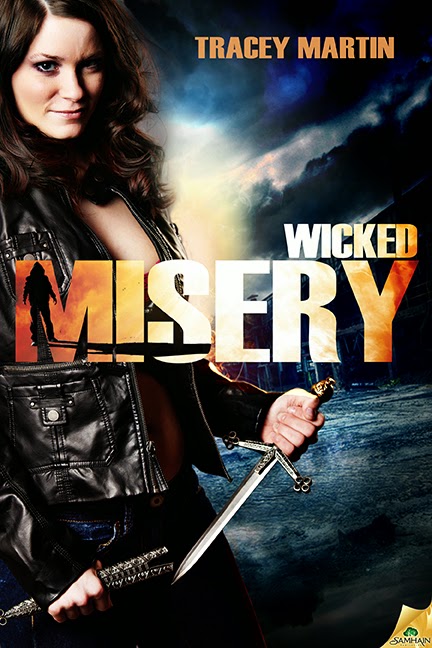 Jessica hungers for misery. She feeds on it. She thrives on it. In some ways it’s fortunate that she is so very miserable herself. Refused by the Gryphons after her magical talent was so badly cursed, she now makes a living trading souls – helping desperate people out of the deals they make with the Preds – supernatural beings that feed on vices – by trading their souls for the most evil humans she can find. And making a prophet along the way

It’s legal, just. It’s debatably moral – but it gets her by.

Unfortunately it also brought her to the attention of the wrong people – and she is now being framed for a crime she didn’t commit. She is forced to seek sanctuary in the last place she wants to be – among the Preds. Worse, these crimes are pitting the most powerful factions in the city against one another – and the whole city may soon burn

The first thing that struck me reading this book was the world building. This world is rich, it has a lot of non-human, mystical elements in a human setting and there is a lot of effort to ensure that they meld seamlessly. And they do – it’s a really believable, well thought out setting where everything works together and nothing feels jarring and out of place

Which deserves more praise because this world is really unique. The mages are entirely different than I’d expect, the different kinds of Preds feeding on human emotion and vices. The whole new take on demonic pacts and supernaturals preying on humanity and even a magic system that seems to be quite unique. There’s a lot there – and, in some ways, I think not enough of it is explained entirely… but  at the same time I think if there were more explanations the whole book would evolve into one incredibly long info dump that would have to be convoluted just because of the sheer amount of information that would need to be conveyed. As it stands, I love this world and would really like to read more, though have a slight feeling of not quite knowing enough to truly absorb the plot. There was a hole there and I think some things fell through. But what was there was epic and generally easy to follow

I also loved the plot. A nice murder mystery with twist after twist after twist. And the twists made sense, the alternate theories made sense, the distractions made sense. Even the people who were causing problems and scapegoating or blaming  Jessica made sense. I loved that you had all these groups that were either hurting and looking for someone to blame or implicated and looking for someone to scapegoiat and by the end it wouldn’t even matter who was responsible to many of these groups so long as they could blame someone. And on that we have the authorities floating around, causing problems and generally not being involved anywhere because the world really does convey the very essence of the subcultures here – there is a great sense of both the Preds and the mages being part of society but still very much separate, especially when law enforcement is around; it’s a hard balance to strike (other books make law enforcement so distant.

When you have frustration and twists and red herrings it’s easy for the story to feel like it’s not going anywhere or that the pacing is off – but the excitement kept going, I kept being pulled in and I never felt it was dragging or slogging

My only complaint, plot wise, is that when the bad guy was finally revealed they’d been so tangential by that stage in the plot that it felt almost anticlimactic. It’s like of like watching an Agatha Christie movie and learning the kitchen maid did it. Sure, you can see why she did it – but when the character has only held a tea tray and delivered scones it feels a little off that she turns out to be the murderer. Because of that, a lot of the motivation and reasoning behind the mystery seemed to be packed in at the end.

Now, on to Jessica, our protagonist. I don’t think I like Jessica as a person, but I like her as a character., I don’t like her for good, solid character reasons. I like her power, I like that she is unique in a way that isn’t massively over powered – so we can have a unique, different protagonist without the usual trappings of Chosen One specialness. I like the moral conflict she lives with, trying to live with her power, feed off the misery of others, revel in that misery and try and find a morally acceptable way to deal with that; trading souls to make her living but, again, trying to find a way to do it that isn’t reprehensible. She draws lines and worries about crossing them. She’s angsty and does, at times, indulge in in some self-pity. But it’s never over the top and her unique abilities and history give her strong reason for it. And it’s a strength – her ability to be able to cannibalise her own misery is a really unique spin on an angsty character. She’s also not perfect – she envies people, she resents them, she has a streak of bitterness 10 miles wide, she relies on her friends a lot without giving much in return. Her attitude towards Lucen and other Preds is based far more on (not entirely unreasonable) prejudice than on their actual behaviour and she’s often extremely unfair. Her selfishness and unwillingness to trust leads her into foolish, reckless situations and puts a large number of people at risk

Because she’s very human. Does she threaten the future stability of the satyrs and the Preds in general? Yes. But she does it for her own survival, she doesn’t like the Preds – is she supposed to be a noble, self-sacrificing hero or something? Her actions are reasonable even if not always likeable, her mistakes are human, her dislike understandable even when it is unfair. It’s not always likeable, but it is realistic, it is human.

This also has the side effect of making the romance a slow burning one – yes we can clearly see where it’s going, but it’s going to go there through a long rocky road built on interaction and character building before Jessica and Lucen become an actual item.

On that note, the ability to cause massive sexual attraction is not seen as a wonderful magical bonus by Jessica. In fact, Lucen’s ability to cause lust is actually a barrier to their relationship because Jessica will not – cannot – trust her own reactions and feelings towards Lucen. His ability to cause lust means she will never trust the lust she feels for him, whatever the source of it. Any softening of her attitude towards him is seen as woo-woo or manipulation  - the magical sex power is an impediment.

Lucen is bisexual (at least so we can infer from him having sex with one of his male thralls) – this seems to be a trait of the Satyrs who feed on and use sex to addict people to them. It could be something they do just to attach people to them rather than actual attraction, but I think it’s more sex demon = bisexual. It’s a trope, but they don’t live the trope too heavily and there’s no reason to think there isn’t genuine attraction beyond him being what he is. Of course, his partner is unknown and unseen.

Jessica’s best friend, Steph, is a trans woman. She isn’t a trans stereotype, subverting several common stereotypes you often hear – she’s professional, she’s intelligent, she’s skilled, she most certainly isn’t a performance and she’s very loyal to her friend. My previous point about Jessica relying on her friends applies – but it isn’t unique to Steph.

The head of the Satyrs is a Black woman – which would open the door for all kinds of stereotypes if she weren’t efficient and business like. She may be a creature that uses lust, but she’s a leader and a business woman first and foremost. A number of the satyrs and other preds are poc

So, we have an amazing world – that needs a bit more information. We have a great plot, that could have used just a little more foreshadowing. We have a complex and interesting character who needs to work on her lashing out and jealousy when she has no need for either – but expresses them as a character with flaws rather than a badly written character. All of it is incredibly original and all of it works really well. It’s excellent – and promises for a lot more, I can’t wait to see the bumps ironed out.