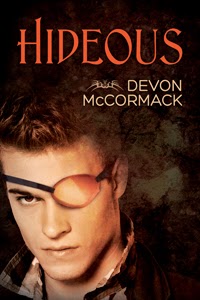 Luke is Cursed. Marked by a demon – a demon that possessed his father, killed his family and tortured him. Under the law of the land, the Cursed must be kept separate from society and carefully monitored because they are vulnerable to possession. Luke is a victim – but he’s also a threat and his entire life is defined by being that threat.

Desperately trying to exist in this terrible system, pulled in many directions and with many temptations, Luke’s worse fear is realised – his father’s demon has found him. And he is Cursed. He is vulnerable

The main fascinating original premise of this book are the Cursed and how they are treated by society and the way it is justified. The Cursed are vulnerable to possession (or infection). This means that even though they are victims, they’re also viewed as a terrible threat that needs monitoring – and they face

While this is a fascinating dynamic in and of itself and it would have been interesting to explore still further, it does introduce a shakiness to the obvious parallels that are being drawn throughout the book – to segregation and closeted LGBT people in particular. The Cursed, admittedly through no fault of their own, are dangerous, they are a risk and closely monitoring them does reduce that risk – this is a presented fact. This is a problem and why these metaphors for marginalised people so often fail – because they seem to always take a group that IS actually a threat in some way to compare with marginalised people.

Once we move past that original premise, however, the whole concept is far stronger and contains so many nuances. Luke faces frequent demands to think about the greater good and society while at the same time pointing out the system, society and the “greater good” never seems to include people like him. It’s easy to claim grandiose motives for the good of all when you’re not the ones who slip through the cracks. Related to that we have a criminal organisation of Cursed who are even involved in drug dealing.  The book does an excellent job of both saying how wrong this is and how these drugs are ruining lives – but at the same time, these Curseds outside the system (Deviants, as they’re called) don’t have any other option. They have to be involved in illicit activity to live – their choice is to struggle on the edge of the law, constantly being hunted or lived as constantly abused slaves within the system. When someone has all the good choices removed, you can’t judge them for making bad ones.

There’s also a Cursed character who navigates the system by, basically, being a sycophant and throwing his fellows to the wolves whenever he can. Let’s be brutally honest, it happens –in every marginalised community there are those who try to play the “we’re the good ones” role, who try to attack their fellows in exchange for a crumb of tolerance. We also have a very conflicted character who can hide the fact they’re Cursed. They live under constant stress of lying and being found out; he both embraces Luke as a confident, someone he can talk to but also shuns him in public and even aids and abets abuse of Luke as part of his own cover. It’s a very difficult role – on top of that Luke is, naturally, very unsympathetic to this character’s drinking because his life seems so much better than Luke’s that Luke cannot see or acknowledge the stress the other character has to deal with. It’s a really fascinating interaction.

There’s a lot of excellent examination of the many facets of the oppression of the Cursed. That also links to Luke being a disabled person. He is missing an eye and a hand, both of which he lost during the attack by his demon possessed father (so also clearly links to his PTSD). I’m somewhat conflicted on the depiction – because Luke is obsessed with the idea that he is hideous (hence the title of the book) because of his scars; over and over he talks about what a horrendously ugly person he is because of his scars and how he is doomed to forever be alone because of it. The flip side is that the characters around him clearly subvert his own devastatingly low self-image – they clearly find him attractive they clearly tell him he is handsome. There’s also more to Luke’s scars than simple physical appearance – every time he sees the scars in a mirror he has a flashback to when he was attacked and tortured. The scars are a physical manifestation of that attack – both a permanent reminder and as a clearly public label of the violence he faced – a public declaration of his Cursed nature, his pariah nature. This especially contrasts to the physically beautiful and “flawless” Cursed who is capable of hiding among non-Cursed.

There’s a lot of nuance here, a lot of levels and while I don’t like the underlying foundation, I do love how it has developed from there.

There is also an interesting depiction of heterosexism with this gay protagonist without having to be repeatedly overtly homophobic – it’s nice to see a detailed depiction of how isolating it is to be the one gay person in a straight dominant environment of this elite boy’s school with the constant sex conversations and assumptions of everyone around him. I also love a brilliant moment of recognised consent – when a guy comes on to him who is so drunk he can barely stand, Luke backs away despite his epic crush, he knows it’s wrong to take advantage of a man in that state – that he cannot possibly consent.

What there isn’t is a lot of female characters (and those straight male teenaged/early 20s students are constantly sexualising and demeaning women) or POC – largely made up by one character we’re introduced to later in the book. She’s an interesting and with her own conflict – as a law enforcement official who both recognises the injustice of the treatment of the Cursed but is also very aware of the dangers the possessed pose.

I’ve spent most of this review talking about the character reactions – and that’s because it’s a very personal story. This is Luke’s story. The world, the plot all revolves around Luke’s experience, growth and understanding. Through his eyes we see the world excellently portrayed and bring up a lot of the deep underlying issues all in a very personal and very natural fashion. There is a plot there – and towards the end of the book, after the excellent introduction, we definitely run with it and blow open the world, a lot of wonderful meta and some really exciting potential plot lines. But these are more introductions than storylines of their own, threads that can be developed now we have seen the principle character and the world he lives in

It’s a book of character development and establishing an excellent original world – and it’s really well done, covering a lot of serious and complex issues with skill and nuance and presenting a protagonist who both I am both deeply sympathetic towards and very intrigued by. I don’t just want to see this world develop and this plot go further, I want to read Luke’s story specifically.