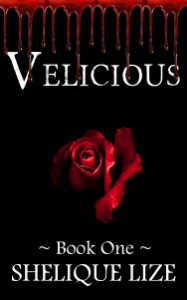 Justice is going to college and trying to move on past a terrifying experience in her past – but when she visits a psychic on her 21st birthday, it’s a herald of old events returning and a whole new world of vampyres and hunters opening up to her.

She can’t go back to a normal life, however she tries to, but at least there are plenty of sexy guys along the way

I think what this book needed more than anything else was a proof reader and an editor – the lack of both shows sadly and it really hurts the story.

The most obvious indication of this comes from quite a few errors in the text – there’s a fair amount of malapropisms or bad spellcheck (“were” instead of “we’re” and engine is “revived” rather than “revved” and there’s some rather bizarre conjuration of the verb “bound”). Some of the sentences were really oddly structured and clearly missing words that just cried out for a good read through and edit. The tense shifted a lot as well, even mid conversation we’d have one person urgently in the present tense but the person he’s speaking to is happily delivering his lines in a more laid back past tense. It doesn’t help make the book readable.

Next to that we also have some more common and less glaring issues – like severe word abuse and over-elaborate and convoluted dialogue and too much thesaurus thumbing (most people “think”, it’s rarely necessary for them to “ponder” and people can talk, all this mumbling is unnecessary).

But the lack of line editing underscores that this whole book could have used a polish – someone to read through it and say things like “this isn’t necessary” or “who is this person? Why are they here?” or “Chekhov’s gun needs to apply” because it really needs it.

Take the characters – this is a 216 page book. In that relatively short book I have Justice (also – unless she has a cape and super-powers “Justice” is a bad choice of name) the protagonist. Her big sister Mya, her little sister Kailah, her two best friends Audrina and Nicolle. Audrina’s on-and-off boyfriend Anthony. Justice’s ex, Calvin and a possible love interest Chace. And Jordan. I have no real idea where Jordan fits into things but the does. And there’s Justice’s ex-friend Erin.

Then there’s Calvin and his team: Jessica, Bianca, Kyle, Vincent and Jonathon. Then there’s the actual vampyres (yes with a “y”), Dante, Marquis, Angel, Chalice, Tayce and Nolanna. And odd psychic Selena

That’s about 16 significant and 5 potentially significant characters in a 216 page book. And I say significant for a reason because there’s a whole lot more names we pass by. Normally that’d be understandable, don’t make extras nameless nobodies – but there is such a soup of names here that when Justice describes someone going past one of her sorority sister’s rooms using their names I’m suddenly wondering if these are more characters I’ve missed and who exactly they are.

Among that name soup what we don’t have is a plot. What we have are lots of beginning hints of stories that suggest a whole lot of complicated plotting and don’t go anywhere. We have Cereberus, the hunters, chasing after some kind of odd supernatural experiment thing. The supernatural experiment thing appears two or three times, is vaguely creepy, then goes away. If it’s not actually trying to kill someone, the cast seems to forget about it. We have Selena making an odd predication about Justice but it’s so vague that it doesn’t go anywhere along with her ominous dreams. Justice has suffered some terrible and ill-defined trauma in the past that is hinted at with a therapy visit at the beginning of the book then almost completely ignored until the very end – where the associated big bad is introduced… and nothing happens. There’s a hunter group running around trying to kill vampyres which is a… thing? Relevant? Important? Then there’s Justice and Dante who are being sledgehammered down some kind of forced romance caused by them obsessing over each other for… reasons. This may or may not be linked to someone called Amelia from Dante’s past… but there’s no detail. As it stands there’s no reason for these two to even tolerate each other (and no reason for anyone to tolerate Dante) let alone obsess over each other

It doesn't help that this book is full of really excessive amounts of pop culture references.

The book ends with a “to be continued.” Literally, that’s how it ends. None of these storylines are developed let alone resolved – it’s immensely frustrating to have all of these hints and absolutely nothing be developed for the entire book. There’s also a lot of random drug use which I think is being used as a clumsy characterisation of bad or foolish people. They also throw around the word "bitch" constantly - it's saturated

And it’s not even due to lack of space – we have whole scenes just kind of waffling around doing nothing. We have Dante’s flashback which tells us… very little. We have Justice going to a Jazz bar and having a drink and then… coming home. We have these little mini scenes where not much happens and the plot doesn’t so much stall as decide to stop all together and have a little picnic and admire the view.

It’s a shame because this book is very inclusive. Justice is Brazillian, Nicolle is a Black bisexual woman, Selena is Latina, Bianca is Asian and there are several other POC characters. I don’t think there’s a lot of character development – but that’s for everyone not just these characters.

I’m frustrated, because these story-ettes could all be potentially decent stories. Several of these characters could be quite decent but it all fails and doesn’t come close to anything like its potential.