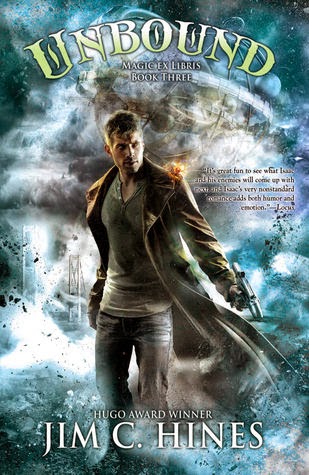 Isaac is in a difficult place – his magic bound by Gutenberg, he has suffered a terrible loss. Without his magic he is helpless but he is determined to try and find Jeneta, especially as the Porters are far more distracted by the Followers of Bi Sheng who have exposed them – and magic – to the world.
Meridiana, an ancient threat that has been long imprisoned, is using Jeneta to her own ends – the conquest and domination of the whole world with the aid of her Ghost Army. It’s a terrible threat to face with not even a scrap of power left to him
I have always loved this world on many levels. Of course, there’s the sheer imagination of it – the concept of magic drawn from books, the many creatures of mythology that both exist in the world and have also been drawn from books to create a near infinite pantheon from which to draw. I love the concept. I also really love the geeky shout outs – this series is a great big revel in genre fiction, full of references to books that so many readers will know and love. It’s an homage, it’s a celebration and in the middle of it is Isaac who is every bit as geeky and adoring of literature as we are. I love it.
I also like how the world has developed. In part we have the Ghost Army as antagonists – but their depiction is also woven into the world in general, suggesting old magical practices have had to alter and die because of the effect of the ghosts. It’s a personal taste thing but I love it when elements of a story have clearly shaped the world and we don’t have a plot that sits clumsily on top of the world.
There’s also a major change in this book – magic is being exposed, step by step. It’s not done in a major way and the main characters are definitely more distracted by other things happening – but its growling and we get blog posts, articles and news reports covering so many different ramifications of magic being revealed. We have laws being pushed to try and limit and restrict magic. We have author’s organisations suddenly realising they are responsible for producing devastating weapons and monsters with their works of fiction – what onus rests on an author who creates a weapon that can be pulled out of that book and used? And then there’s the realisation among many people that magic can perform miracles, cure devastating illnesses – which is definitely something to celebrate but also turns into the horrible question “well, why haven’t they?” If magicians could cure cancer but instead kept their magic secret, well that’s a terrible thing to absorb. Especially when magicians may be your closest family who let your loved ones suffer rather than use their magic to help. I think this is going to be a major element of the next book.
The nature of the big bad was also an interesting twist I liked.
On top of the world we have Isaac who I really like – and not just because of him being an avatar of all things geeky. He spends a large amount of the book completely powerless and spending most of it in the presence of Gutenberg and Juan De Ponce de Leon and even Lena who are all immensely powerful people. But Isaac’s true strength shows through – he’s intelligent, very imaginative and has a brilliant but easily distracted mind and he is very very well read. He is a librarian and that is his power. Towards the end of the book, that imagination is what powers him back to magic – and throws in a nice level of epic in the final confrontations which I always appreciate.
We also have a lot of diversity in the book – and most of them are interestingly written to bring out some nuance to the characters. I loved the constant presence of Nidhi, a South Asian bisexual or lesbian woman in the book. As a non-magical human she seems to be the one with the least impact in the story – but as a therapist the other characters are constantly turning to her for both support but also advice. They rely on her a lot to hear about the condition of those around them – because all of them have been through such extreme stress and loss and are facing such a huge threat that many of them are hurting and close to breaking. Nidhi is an expert and everyone treats her as such. There’s none of the fictional trope of contempt for the therapist or disregarding the psychiatrist’s opinions – her input is welcome, needed and valued. I also like the growing dynamic between her and Isaac.


Lena, a dryad, women of colour and a bisexual woman is a power house of physical capability; she’s strong, clever, crafty and is constantly defining herself. It’s that last that makes me really like her – she is a creation of the worst kind of pulp fiction, created to be nothing more than a sex toy. But she has constantly defined herself beyond that origin – made to please one person she then sets out to attach herself to two to give herself greater choice and agency. Then she writes her own story so she can define herself. Even bound to a tree, she finds a way to bring that tree with her. She is constantly redefining herself, moving beyond what she is and towards the person she wants to be.
Bi Wei isn’t a huge presence in the book – but she is a power but she’s also human. She is a master of Libriomancy, or her own form of it, on par with Gutenberg but has a lot of Isaac’s personality traits as well; the love of a good puzzle and a mental conundrum, finding fun. She’s also clear with her own agenda, the Ghost Army are terrifying and an enemy to face – but she’s not a fan of the Porters or Gutenberg and them facing problems is not something she’s going to shed tears over.
And then there’s Gutenberg and Juan Ponce De Leon, both ancient, incredible powers, both with radically different philosophies about how the world should be run. Gutenberg constantly trying to control things, constantly trying to stop his imagined worst case scenarios – no matter what atrocities it takes to do it. And Ponce De Leon, with faith in humanity, with a long term view and belief that This Too Shall Pass and that things are rarely as bad as you imagine and, eventually, everything will come round. Two very conflicting world views and there’s a lot of conflict there, but equally there’s a lot of respect – and a lot of love. Even if their relationship ends in tragedy (which I was less a fan of), I did love how their love was depicted – it was sweet and strong and long standing and meaningful even if it wasn’t as overtly sexual as, say, Isaac, Lena and Nidhi. It’s a shame that a lot of that depiction of genuine affection happened through grief and loss.
And the last addition of the little coterie is Nicola autistic bard and a regional leader of the Porters. It’s so rare to see any non-neurotypical person in a position of leadership (she is an able and capable leader, even as she disdains politics); too often they just have some special knack or talent that is mined for neuro-typical characters – a resource more than a character.
We only really get to see more of Jeneta through Isaac’s experience of her – but the very concept of her is good. She’s a Black girl and a lover of books and technology, she loves and is passionate about poetry and she, at her very young age, has mastered elements of Libriomancy that escape even Bi Wei and Gutenberg. I would love to see more of her
There’s a lot of epic here. There’s a really exciting, tense fascinating story that would easily hook me in. There’s a world setting that is deep and nuanced and layered and original that would ensure me as a fan no matter what. On top of that we have excellent, fully realised characters with their own discernible personalities and character – and a fair chunk of diversity as well. An excellent book and part of an excellent series - but it’s more than that; it’s a book dedicated to the supreme joy of reading. It is an homage to literature, it is a celebration of reading, it revels in the sheer wonder that is books and I love it.