The Way of All Flesh by Tim Waggoner 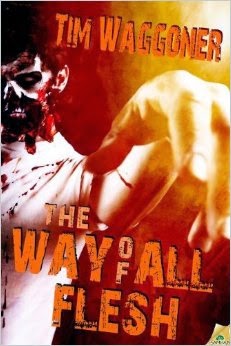 David wakes up to find his town has become a nightmare. He doesn’t remember what happened – but everything is falling apart, his friends and neighbours are now brutal cannibals and terrible demons stalk them. Only a strange teenager who follows him around seems to have answers

Kate knew her brother was dead – nearly everyone is dead in this zombie infested wasteland – but she never expected to come across his zombified body staggering around. She knows she should grant her twin mercy – but he doesn’t seem to be acting the same way most zombies do

I… have no idea how to write this review. I’ve tried to start it several times and I am completely lost.

The Way of All Flesh is… weird. It is unlike everything I’ve ever read before. It kept me reading because I had no idea what was happening, what was real or what the result would be, I kept going because it was mysterious and raised lots of questions and conundrums and had a constant shifting viewpoint that made it so very hard to figure out which character was seeing reality, what was really happening and what the end result would be.

That’s not a bad thing. Usually when I say I don’t understand the ending of a book or the plot of the book, it’s an indication of a plot hole or bad characterisation or general shaky writing. This isn’t – the confusion, ambiguity and surreal nature of the book is clearly intentional. It’s a book that demands you pay attention and think, that requires close analysis and a lot of careful re-reading.

On the face of it, we have a zombie apocalypse – a plague (Blacktide) wiped out a huge swathe of humanity and leaving most of the rest as zombies; with only a few non-infected survivors left. Our protagonist is David – a zombie. He desperately tries to figure out what is happening while driven by impossible hunger – guided by a mysterious teenager who seems to have all the answers and a lot of crypticness. David’s vision constantly shifts back and forth between reality – zombies, run down ruin of a town – and an odd zombie vision where humans are monsters and his zombie neighbours seem to be coherent human beings. Coherent cannibals… but coherent still. Because of the way it’s written I do keep doubting which one is the actual truth – or whether either are true or both are true. He staggers through the world, trying to find his family even as he learns more and more about what has happened.

Secondary characters are Kate, David’s still living sister, and Marie - known as the zombie whisperer because she has an insatiable curiosity about zombies and what caused the world. They are, for their own reasons, very interested in David and his odd behaviour. They also have a romantic relationship in this broken world since Kate is a lesbian and Marie is bisexual; their relationship is strong and shadowed by the whole looming presence of the apocalypse as Kate often wonders what relationships even mean in an apocalyptic world. It’s a nice level of thinking. Marie is also a Black woman and the only POC in the book.

The last main character is Nick – a serial killer and even he is interesting in his way. Blacktide has… humbled him, it’s rendered him irrelevant, his crimes insignificant, his brutality a nonsense compared to the reality around him. Like so much in this book, it’s a totally new way of thinking I never imagined. I do think his cries, however, are unnecessarily sexual in nature in a way that added noting to the book except attempted horror and gross-out factor

There are also some interesting extra touches to this zombie apocalypse that I think a lot of zombie books fail to include. Like Joe being the hero because of his knowledge of the genre and therefore having so much advice to offer. Or the portrayal of boredom as a toxic threat – ultimately, if you spend most of your time hiding in a secure location away from the zombies and have none of the modern conveniences we have come to expect, boredom is a threat. You can’t just hide all day without the monotony and tedium of it becoming a threat in and of itself.

As can be implied, a lot of this book is about perception – and how perception both shapes reality but also hides it. From David’s oscillating vision, to Nick the serial killer who turns out to be far more of a monster than any of the zombies even down to mundane things like Joe who is hailed as something of a saviour among the survivors because his knowledge of zombies from computer games helped them all survive – but at the same time he’s utterly terrified of the zombies themselves. There’s a lot of layers here – and on top of all that is a very bleak cosmology and cold view of creation and the universe that somehow fits with it all and the ongoing concept of hunger as something that needs to be transcended but which consumes everything.

Does it sound confusing? It is – but it’s meant to be. It’s meaty and hard to digest and sometimes difficult to follow, but it’s fascinating at the same time. I honestly finished this book not knowing what to think about it, it’s just too… odd for me to really pin it down.