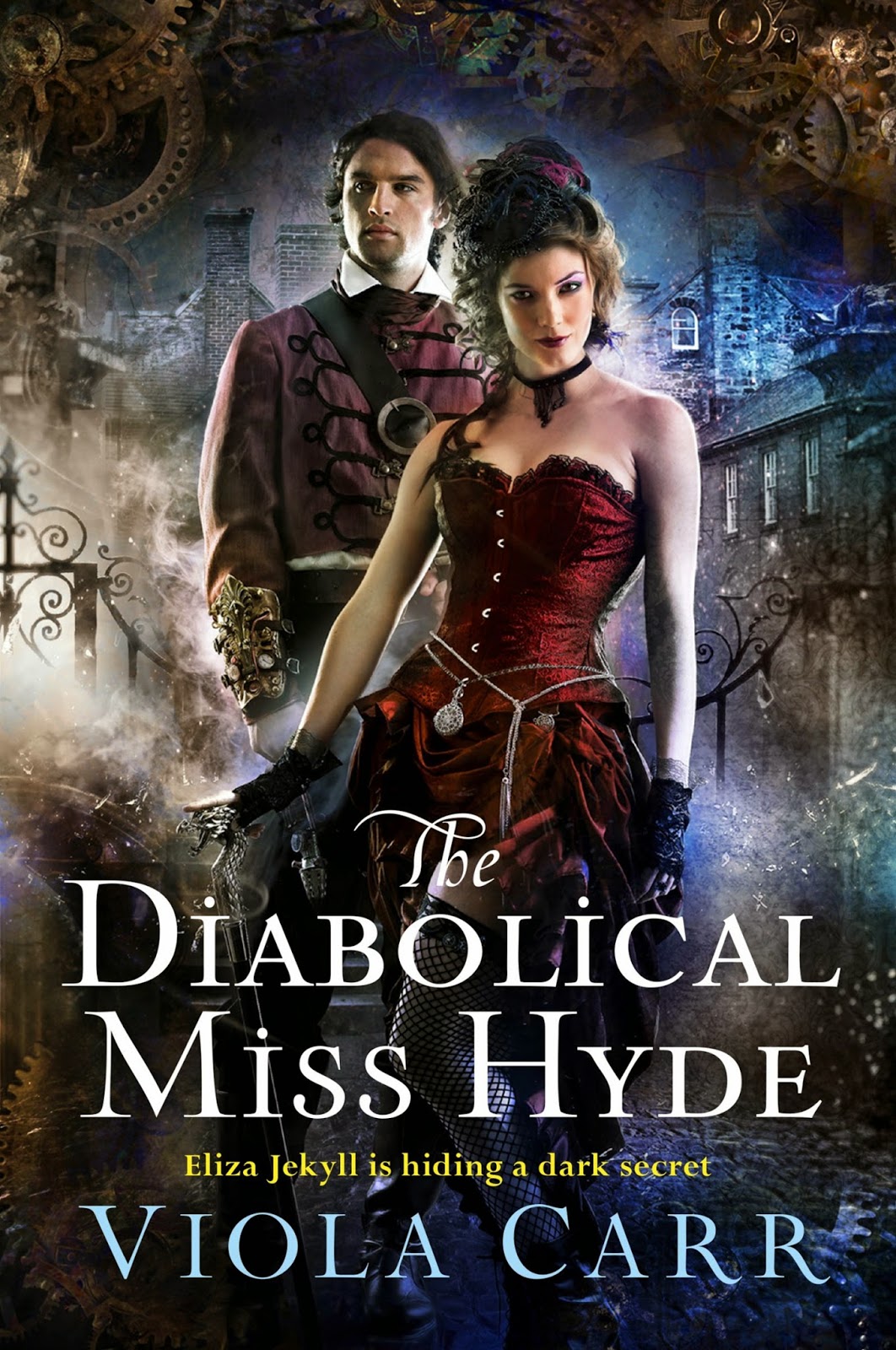 Dr. Eliza Jekyll is a doctor at Bethlem hospital – and a crime scene investigator, helping the police investigate a series of disturbing murders and mutilations that are stalking London

But Eliza has a secret – and a serum she is driven to take which lets the much wilder Lizzie Hyde out to play; a character who is much more in key with the dark underclass of London unlike the oh-so-proper Eliza Jekyll. Eliza tries to keep her repressed – but Lizzie’s knowledge and connections may be essential to the case.

This is a problem with Captain Lafayette, an enforcer for the Royal Society, police of all things mystical and unorthodox joins the investigation for reasons unknown. Her secret could end up with her burned at the stake.

This book has a whole lot of awesome concepts that I love. The world is excellent – a wonderful brass-and-electricity steampunk world with all of that aesthetics, taking a well researched Victorian London with both it’s very proper upstairs world and its gritty, grossly abused, unequal underclass who strived underneath it. We have a deeply unequal world and a deeply unjust one that explores the revolutions and responses to revolution that were so common at that time that we don’t often see in Steampunks (or, if we do, we have some nebulous “anarchists” or “insurrectionists” without much exploration of their motivations).

With all this repression it’s also built into the supernatural and super-science elements of the show itself; we have people of fae descent with strangely different bodies who are repressed and driven into the shadows by the ordered Royal Society. In this oppressive society, not only are the mystical human beings driven out, but also the science/quasi science itself is repressed. The sheer huge potential of Steampunk and Victorian Gothic with its ether and technology and strange potions is obviously a threat to the staid establishment and is heavily and viciously policed.

The protagonist is also an interesting twist: Dr. Eliza Jekyll and Miss Lizzie Hyde; with an extra twist on the whole “good and evil” dichotomy of the Jekyll/Hyde storyline. It’s not good and evil, it’s, if anything, order and chaos. Or maybe law & society vs underclass. Or even upper class vs underclass. Or, probably more accurately, they don’t really fit neatly in any of those categories. Lizzie is more ruthless but has often moral barriers and, in some ways, more compassion than Eliza does. Eliza, though, is easily subversive and rebellious in her own role as a female doctor, a police surgeon and a doctor in Bethlem Mental Hospital. There’s no simple black vs white this vs that line between the two which in turn makes their own storyline compelling as Eliza begins in repressing her “sister” but slowly opens to her more and more.

Along with all this we have an interesting murder mystery – and it’s interesting to me because it’s almost woo-woo-less. Eliza doesn’t have some arcane technology or special ability that makes her a super expert at solving crimes. What she has is her credentials, her knowledge and her skill which is interesting in and of itself though I’d quite like to have seen more of it.

Another major bonus of this story is Eliza and Captain Lafayette – member of the Royal Society, the police force that hunts down and burns unorthodox scientists and beings, like Eliza/Lizzie. Lizzie is interesting with Lafayette as well, but Eliza and Lafayette’s snarky back and forth is a joyous thing to read. Their banter, their battle of wits and her constant, expert put downs are truly glorious

One wishy-washy issue I have is hard to put into words – but the book felt long. I was reading it and enjoying it but I got to, say, the 300 page mark and had a sudden sense of “why is this book still going?” I wasn’t exactly fed up of the book, but it was beginning to stretch my attention span. I was enjoying it but I was starting to count down and very conscience of how much of the book is left. So, yes, I definitely had a sense that it needed cutting down a bit, it needed speeding up a bit, we needed to reach the conclusion a little faster than we actually did. In the end, it left me vaguely impatient with the ending rather than revelling in it

I think in part it was because this huge and wonderful world is just, perhaps, just a little too huge. Or, rather, there is far too much of that hugeness involved directly in Eliza’s story

So we have the Royal Society persecuting any deviation from orthodox science – which is a fascinating background world building thing. But then that pulls Eliza into it not just as a potential unorthodox practitioner but because the mysterious head of the Royal Society has Plans For Her.

We have the storyline of Captain Lafayette and his deep dark secret and the nuance of his relationship with Eliza and Lizzie.

We have the Lizzie and all of her contacts with the underworld which are all kind of involved and complex and emotional scenes.

Then there’s the asylum and Todd – a serial killer who Eliza helped lock up in Bethlem. She has a wonderfully conflicted feeling of guilt and sympathy while, at the same time, thoroughly being sure that he is a dangerous man who she had to lock away. He is now obsessed with her and he keeps appearing now and then in the plot but it’s not really developed very far and I’m not sure why it’s there. Honestly, I think this could have potential if the full complexities of it were explored, the whole shattered brilliance of Todd’s mind and sense of beauty and the torture of Bethlem for him and Eliza being so conflicted over that. But without development, Eliza seems to have a deeply unhealthy fascination with a man who wants to actually murder her that makes Silence of the Lambs look positively healthy.

And there’s a lot of insurrection and uprising going on and this draws in this random journalist/publisher who keeps following Eliza around as well because… I’m not particularly sure but it could use more development.

That seems to be my recurring issue with this. Because all of these storylines? I like them. I like them all. They’re all excellent – all of them. But pick two! Pick a few and fully develop them rather than have all of these excellent storylines which, when brought together, is just a bit too much and none of it quite get the attention and development they deserve so none of them quite reach their awesome potential. And part of that is because the potential of all of these is truly awesome.

That awesomeness is used to explore some fascinating elements. I think the best by far is class – because of how Lizzie and Eliza represent. Eliza Jekyll is a proper lady of her time; she’s respectable, she’s wealthy, she’s proper. She faces a huge amount of opposition due to gender, but her wealthy respectable class gives her some level of superiority, protection and presence. Contrast that with Lizzie Hyde who, of course, has Eliza’s resources but speaks and experiences life as one of the lower class of Victorian London. Even while she condescends to Eliza for her sheltered life and her weakness, she equally envies Eliza for being the proper lady and getting the regard for that. She also argues a lot with Eliza when Eliza is judgemental of the thieves, lower class and sex workers of London, rejecting Eliza’s judgements as ignorant pronouncements from someone who is thoroughly insulated by her privilege. It’s excellently done.

Of course there is a lot of excellent challenges of sexism – Eliza is not taken seriously over and over again because of her gender despite her obvious talents and skills and knowledge. It’s what we can see in a lot of female-lead Steampunks, but it’s still well done and nice to see. It also goes beyond merely Eliza’s experiences but also other women caught in abusive, exploitative relationships – and not just domestic violence as intimate partner violence, but also domestic violence from brothers and other family members as well. It’s an aspect of domestic violence we don’t always see as it is often mistaken as just being about intimate partner violence. There’s also a mention of some of the inmates of Bethlem basically being women who are, for whatever reason, considered “inconvenient”.

In terms of LGBT people… we have some very minor tragic lesbians who end up tragically in tragedy which is truly tragic. As far as a teeny-tiny tragic lesbian role goes it’s not awful – there’s a clear call out of how wrong it is to treat them this way and how sad it is. So if you’re going to have extremely tiny side-characters who are tragic lesbians then it was well done. But they were still tiny character tragic lesbians. I don’t recall any POC in the book at all – and this is quite a large cast.

We also have, as seems to be almost essential in most Steampunks now, a representation of Bethlem hospital – or Bedlam as it became known. Which includes lots of mentally ill people screaming and gibbering and being disturbing and disgusting and scary. Even while they are pitied by Eliza they’re still the backdrop of horror I’ve come to know and loathe

I am really intrigued by this book – and certainly interested in its series as it develops. There’s so much here, the underclass, the fae, the steampunk, Eliza and Lizzie’s stories and so much more. It’s huge, it’s vast, it’s fascinating and I really want to see more. But I worry about it drowning us – there’s a lot there but it needs to be digested in chunks, not thrown out in a vast wave.