The Walking Dead Volume 21: All Out War Part 2 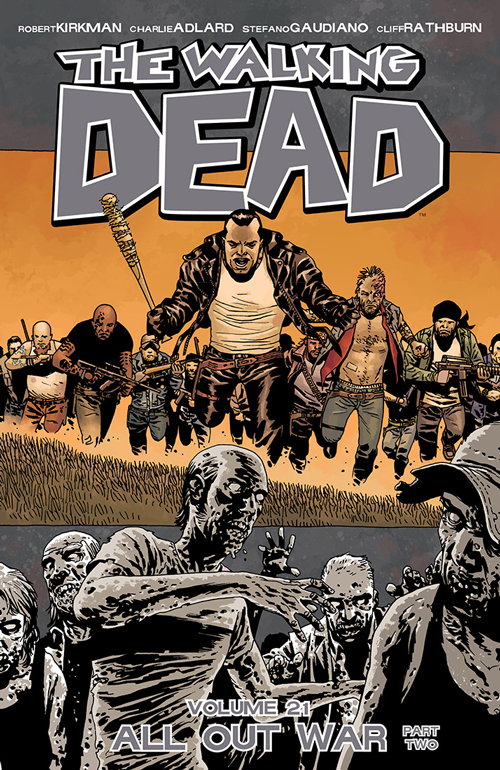 One thing that has dramatically changed in the last few volumes which we’ve touched upon is the whole tone of the comic books. Obviously, for a long time The Walking Dead is all about survival against the Walkers. Then it was survival against various human groups that were generally awful against the backdrop of the constant threat of the walkers


This is kind of off the table. The fight for “survival” is more a fight for dominance, control. Yes, it’s a fight to not be controlled by a brutal, raping dictator who is, frankly, a caricature of evil, but it’s not the same tone as the series has shown.This isn’t a battle for survival in a zombie ridden world. This is a war between two factions - good and bad - with zombies floating around in the background


Part of this is due to the sheer cast of characters now. We have three factions (on the “good guy” side)- Alexandria, Kingdom (the place with the tiger guy) and Hilltop (that’s the place full of random cowardly extras that Maggie now leads). And we have a squillion characters (this number is an approximate). If you look back on some of the earlier volumes I continually kept a living/dead list. because there were so few characters, anyone could die and while not all deaths were meaningful, they did significantly reduce the number of the group. There were undeveloped characters, but even the most expendable of them made a significant difference to the group composition and fear of the stories. They risked extinction constantly


We don’t have that now. We have people dying I’ve never even seen before. We have a whole death bed scene with Heath and Denise and I only have the vaguest idea of who any of them are. The groups have apparently taken vast losses in the war - but the mere fact they have the NUMBERS to take vast losses says how much these comics have changed. They have canon fodder. The tone of the comics, the nature of loss and the nature of the group has changed dramatically and I’m not sure I’m on board with the change. I know there would be change - there should be a change because there’s a limit to how long you can play the same storylines over and over, but I’m not sure how far they’ve sold the new reality yet. Part of it is, I think, because they haven’t spent a great deal of time exploring the people and processes of Alexandria -let alone Kingdom and Hilltop (the big town o’ extras). The stakes have changed, the cast and character has changed - but there hasn’t been a great deal of investment in making me care about the new reality before everything was torn up by war. I also kind of want to know why they could spend months wandering around and only finding isolated strongholds but on arriving in Alexandria there’s villages all over the places. I bet the Governor would be kicking himself over all the conveniently poorly defended towns there were out there to claim.


There’s another shift that comes with this - moral ambiguity. Ok, we had the Governor and the cannibals and there was always a clear good and bad guys; but at the same time “what will we do to survive” has been an ongoing theme of the The Walking Dead, one of the defining characteristics of the whole franchise is making hard choices in impossible situations. This is destroyed by Nagin because he is cartoonishly awful; even the Governor was hastily fitted with a humanising backstory to show he WAS once not entirely an irredeemable monster of a human being. Nagin is hard even to hate because he’s pretty patently ridiculous. This also means that the nuance/turning point moment of Rick not killing him lacked the moral turning point moment - this wasn’t a point of the defining characteristics of civilisation vs brutal survivalist society because we’d kind of left that point in its wake


The Walking Dead is moving onto something very different with their storyline but I’m not sure they’re pulling it off. Rick is still being upheld (without any damn reason) as such an amazing saviour figure that I’m amazed he doesn’t have his own cult yet. We have a huge war that just went on for pages and pages and pages as people we didn’t especially care about died. We had a master plan from Nagin that wasn’t really all that mastery (infecting weapons with zombie goo? You live in a society without easily accessible vaccines, disinfectants or modern soap - you could smear just about anything on your weapons for similar deadly effect).


The actual gems in this volume, in between the interminable fight scenes, were the personal moments. Eugene stepping up has been a slowly developing story and he came into his own this one. I also quite like Olivia’s moment to Rosita about not resisting her attraction to Eugene just because he’s fat and she doesn’t think she should be. Or Maggie’s quite grief over Glen. Or Carl finding Sophia again and it being clear how different he is from her now


Or Carl at all in this volume - he has been through so much to be virtually shattered - and he knows it, telling a grieving child to hold onto their grief because at least they can still feel pain like that. This powerful statement shows that Carl not only has reached a place where he no longer hurts - but he is aware enough to regret that and realise that it is a loss. Coupled with him continuing to be the dissenting voice against letting Nagin live and Carl’s story may be the most compelling one in the volume.


Not Rick, the super-leader. Certainly not with Michonne “I’ve learned to trust you” Aaaaaargh, no Michonne, no no no. Enough with the constant fawning over this man.


We do have a major LGBT inclusion increase with Jesus/Paul being revealed to be gay - he’s much more prominent to their somewhat minor gay characters in the past and is a definite aversion of any kind of stereotype - I wonder where that is going to go. And how much of a role a character who is defined by his arsekicking is going to have in a series that is becoming less survival orientated (worth noting since that was one of his few scenes). Similarly I'm concerned about Michonne - other than Rick fanpoodle, will she be given a place to be?