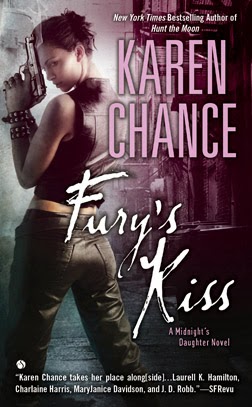 While the war rages on and the American Vampire Senate looks to fill its empty seats, Dorina is still part of the squad looking to track down the smugglers using portals to arm the Dark Mages with deadly weaponry and creatures to tip the balance of the war

The investigation turns deadly when several vampire agents are destroyed leaving only Dorina as a survivor with a hole in her memory. To find out what happened, she will have to deal with vampires, fae, fallen angels – and more plots than she could ever have imagined.

But while all this is going on Dorina has another battle – with herself. Old barriers in her mind are coming down and everything she believed about her dhampire nature is being challenged – presenting new threats and new possibilities

There is a lot about this book I love

I love the development of what Dorina is, of the very nature of the dhampires and how this relates to vampire culture. The whole sense that vampires are deeply social and hierarchical and that Dorina’s vampire side feels all of that but is then isolated from the hierarchy by vampiric hatred of dhampires and her human side’s own weakness. It’s a wonderful little twist and manages to greatly expand what Dorina is without the sense of retconning or changing the established world setting at all. It also led to more excellent exploration of Dorina’s character and history as well as vampire culture. There’s also the ever-complicated relationship between Dorina and her father which is also wonderfully expanded on and explored in this book.

I also really liked Ray in this book. We had a lot more of his history as someone who is half-Portuguese and half-Indonesian and his history of being rather stuck between two cultures (including an interesting insight that previous Asian vampiric masters had used him, in centuries past, to be their guide to Europe but missing that European blood doesn’t give knowledge of language or custom). He really grew as a character in this book beyond his standard role as somewhat inept comic relief. He’s survivor and a chancer. A vampire who will never be a major power nor has any real close family ties to keep him safe - he’s always found his niche by being clever and being daring. He takes risks, he’s willing to try things no-one else would consider (sometimes for very good reason) he’s imaginative and creative and comes up with a lot of crafty answers and work arounds because of it. He becomes an asset and we can see him as an asset without having to greatly increase his power.

The plot itself is amazingly complicated (which I have some problems with which I will get to) which draws on every element of this vast world – and it is vast. I think every faction and player that has been introduced in the last two books all plays a hand in this book – the fae, the vampires, the mages and some new ones we’ve never heard of before. It all adds up to an incredibly complicated master plan which fits so well in this rich and wide world that is laid out for us

The pacing of the book is break neck (which, again, is not without its problems). Dorina runs from action to action, scene to scene at an incredible rate with no time to catch your breath before the next concept or battle or revelation lands on you. This doesn’t pause or get bogged down, though it can certainly exhaust you as you struggle to keep up with the battles or absorb yet another chunk of world building, all of it thrown at you with little chance to process.

The main problem I have with this book is that it feels long. It is somewhat long, that’s certainly true, but it’s the feeling of its length that is the problem. That sense as you’re reading that this book has already gone on for a very long time and isn’t it about time it started to get wrapped up?

I think it’s because just about everything in this book is just a little bit overdone. They don’t just have a fight scene, they have a fight scene that goes on and on and on and on. And it’s not badly written or badly paced, it’s well described and full of action and a really vivid scene – but it just keeps on going. And this includes battle scenes that don’t really add a whole lot to the overall plot – like when Zheng decides to challenge and attack Dorina when she goes out shopping (in fact, the whole scene with the buying condoms for fae guards was just unnecessarily inserted), not only is the scene not necessary but it just keeps going and going and going. Even scenes that are necessary, like the zombie attack, Dorina seems to spend hours and hours and hours hacking her way through untold legions of zombies.

In addition to these over-long scenes, we also have a whole lot going on. This book is complicated – between mental combat and memory exploration (which, again, goes on for far too long) to the plotting in the vampire council, to the involvement of the smugglers, to the combat games to fight over the vampire senate seats to the sudden appearance of the fae – there is so much happening in this book, so many players, so many different forces and factions all plotting together that it was hard to keep track. Sometimes I’d be reading and I’d wonder who a character was – who was Slava and how did he fit into things? As Lord Cheung involved? Wait, there are zombies now? Zombies with acid blood? This necromancer is Louis-Cesare’s old nemesis?

We also have interesting asides of Dorina while in her vampire persona which is, as I said, a really interesting development in the nature of what a dhampire actually is, but these are random, often appear without context (I think to try and make them a surprise, while at the same time being really obvious what they are) and the seem to be involved in an entirely other mission behind the scenes which has involved an entirely new faction of creatures leaving to a whole lot more confusion. I flicked back and forth several time because these flashbacks talked about finding and saving a child and I kept thinking I’d forgotten a child somewhere along the way – I assumed they meant either Stinky had a secret identity or Claire’s baby. It was confusing. Not only was it confusing, but it meant that some of the actual principle plot elements – like the Irin and the actual fae plotting – were touched on far too lightly leaving us not so much with a surprise twist but severe whip lash.

Then we throw in Dorina’s completely unnecessary angst over Louis-Cesare and it was too much. I really think this book would have been immensely improved by being turned into two books and then expanding the points with a little less of a hectic pace. This huge world and complicated plotting needs exploring, not sprinting through.

We do have a number of POC in this book. After Dorina, the most prominent character was probably Ray and his Asian ancestry is definitely a part of his history albeit not something that seems to influence his current culture. He’s also free of any particular stereotype, he’s a roguish risk taker, a criminal without being evil or even especially crooked, clever without being depicted as a genius or super logical. He’s interesting and I kind of like him and his growing relationship with Dorina

We also have Zheng, he challenges Dorina and he’s fighting in the senate battles to gain his own place. He’s lethal, he’s deadly, he’s cocky and he’s actually kind of fun. Again, he doesn’t appear to be especially stereotypical – he’s a deadly fighter but that’s as much down to his power and being a vampire and there’s no real mention or depiction of it being due to impressive martial arts or shining katana or similar trope. He’s also depicted as extremely sexual and good looking which is another stereotype challenging element

With the foreign councils visiting there are Latino, Black and Asian vampires from their respective territories, each of which are massively powerful but equally extremely distant. These characters are (in some ways surprisingly given the treatment of Ray) somewhat stereotypical – or perhaps Archtypical. The Consul of Africa has been starved in the past and looks it, he’s surrounded by gun toting soldiers with no real attempt to conceal the fact they’re soldiers. While the Asian Consul is enigmatic and silent with powerful mental abilities, surrounded by floating, razor sharp fans.

We also have some minor POC, background cast, extras, bit parts; they don’t serve as major elements off inclusion but it is interesting to see a world where the back ground is also diverse.

On the LGBT side, we have the most definite proof that Radu is gay without the plausible-deniability issues we’ve had with previous books. Someone refers to one of Radu’s humans as a “boy toy.” There are certainly more respectful ways to avoid that “he’s-gay-but-we’re-going-to-sneak-round-it” issue. Of course, the concrete revelation means that the stereotyping I’ve complained about in the last two books is just redoubled – including in this book where Dorina manages to wedge the word “fabulous” twice in the same piece of exposition about her uncle.

We still don’t have much in the way of other female characters other than Dorina. She is an excellently complicated character but moves in a very male world. Her best friend, Claire, lives with her but she very rarely takes part in the actual book. She’s a background figure; their friendship is strong but she’s still very distant behind Mircea and Ray and Marlowe and even Zheng and Radu. After Claire, it’s a very steep drop to the next most present woman – small parts, maybe important people but not present to a large degree

In the end, I find that I have made the same comments for each of these books. An amazing world, a main character I’m really interested in and a plot line that is quirky, twisty and well worth exploring. But all of it rushed through without time to digest and so much that could have been even better if there had been some time to explore it in greater detail which would also remove some of the sense of the book being so distracted.