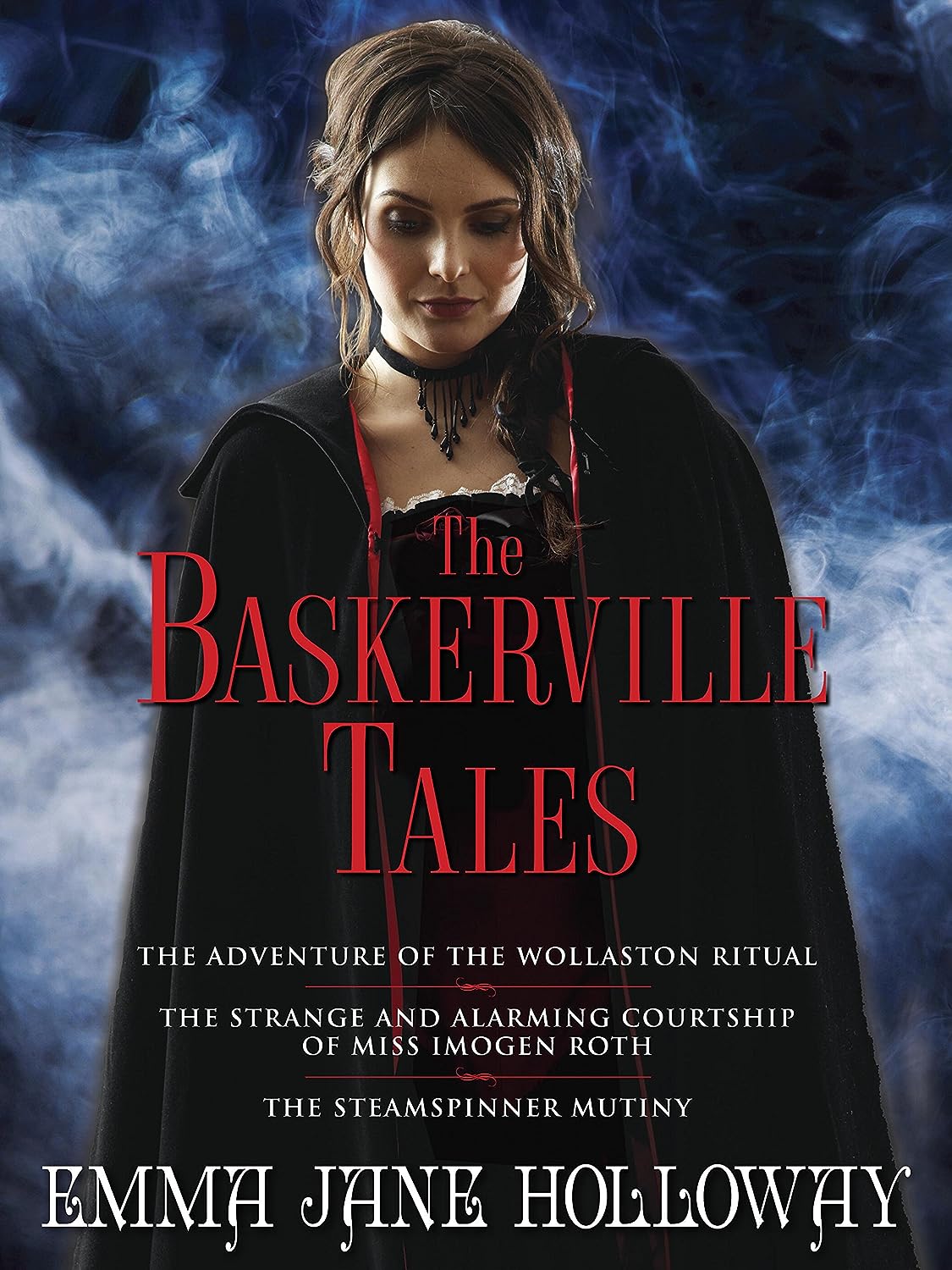 The Baskerville Tales contains three short stories in the Baskerville world.  Each short story includes characters we have become familiar with as protagonists.  They are an accompaniment to The Baskerville Affair series and don't really add much to what we already know.


The Adventure of the Wollaston Ritual

This short story takes place while Emma and Imogen are still at Wollaston Academy.  It is a prequel to A Study in Silks.  With her time at the academy coming to an end Emma is concerned about her future because unlike her fellow classmates, coming out in London and searching for a husband just isn't in her cards.  Though the Academy has done much to turn her into a proper lady and smooth down the rough edges she acquired living in a circus with her father's family, traces of all she learned are still with Emma.

When a deliver girl brings a rotting arm to the Academy campus, as proof of the supposed ramblings of Dr. Larch, Emma and Imogen are the only ones convinced that this isn't just a sign that Dr. Larch has taken leave of reality but a sign that something unnatural has occurred.  When Imogen catches a chill due to her weak constitution, it's up to Emma to develop a plan of execution.

By the time we meet Emma in A Study in Silks her affinity with devas and mechanicals is well established.  This story explains how it is that Emma combines magic with mechanical objects.  To solve the mystery of the shambling zombie, Emma must trust in her abilities and accept that the blood (read: magic) will always be with her.  Emma learns that there is place to employ the skills of proper feminine behaviour and place to cut to the chase and deal with what's at hand. I do however wish that there had been less time spent on the mystery of the zombie and more time spent delving into how Emma felt about her powers and the conflict she faces regarding them.

The Strange and Alarming Courtship of Miss Imogen Roth

As the title infers, this short story is about the romance between Bucky and Imogen. It occurs just after the end of A Study in Silk.  Emma has been sent away in disgrace, and Imogen's father is facing great financial difficulties.  Imogen is being pressured to make a good match to help improve the family's fortunes and standing. Imogen however has her heart stuck on Bucky who while set to inherit a fortune does not have the class background that her family approves of.

As with all romance stories, this one includes a misunderstanding between the couple before leading to a dramatic HEA.  Unfortunately, I found the drama to be trite an uninteresting.  What drew me to this series is most certainly not the relationship between Imogen and Bucky and I found my eyes skipping over sentences in a rush to finish this story.  Imogen didn't appear strong in this story and in fact acted like an infatuated school girl, leaving me to wonder where the quiet confidence she had displayed in other books went?

In keeping with the steampunk theme of this series, Holloway does include small elements through the use of Bucky's inventions; however, it's not enough to give this story a real steampunk feel.  More than anything this is a short story about romance with small steampunk elements thrown in. For me, it was a disappointing read.

This short story focuses on Striker, Niccolo's number two on the ship.  It occurs just after then end of A Study in Darkness. The crew is at a loss after the destruction of the Red Jack.  Striker has gathered the three remaining members and set to work building the new ship the Athena. Though Nick went over the rail of the Red Jack without a parachute, Striker refuses to give up hope and finds himself looking for him with each sunrise.  Unfortunately, the replacement crew has other ideas.  The replacement crew wants to rescue their former captain who has been imprisoned on Devil's Island by the French.  This leads to a mutiny which Striker alone can deal with.

In the novels we have only seen the street brawler side of Striker and his abilities as an inventor.  The Steamspinner Mutiny shows of a softer side - Striker's heart.  He is loyal to a fault and has room to take on a three legged dog though it makes no sense with the life he leads.  Having been forced to survive on his wits his entire life, Striker has never allowed himself a moment of weakness until now.

Much of this short story was taken up with action because as aforementioned, Striker was trying to stop a mutiny.  It's certainly a case of mileage may vary because those who enjoy those kinds of stories will enjoy the epic battle and those who don't will find themselves skimming for sure.  I fall into the later group and found myself just wanting to see the story end.  Because, this story is about the development of Striker and Niccolo is missing, there are no steampunk elements to speak of.  All of the things I love best about this series were absent in this short story making it a disappointing read for me.


I really enjoyed this the series up until this point.  These short stories were decidedly flat to me.  Whatever intrigue appeared was trite.  Of the three stories, The Strange and Alarming Courtship of Miss Imogen Roth, was easily the worst because it was absolutely vapid.  It read like a cheap Bronte novel and that is not what I signed up for when I originally read this series. Furthermore, this collection of short stories continued the erasure in this series as it featured no GLBT characters and no characters of colour.  This was compounded by the fact that the class analysis that Holloway had been so great in portraying in the novels was missing completely.

If you really love the characters Holloway created, I highly recommend skipping this book of short stories because I believe it's better to have fond members of them.  The Baskerville Tales was not only really disappointing, it felt like the world I loved so dearly had just disappeared.  The only thing I can recommend this collection for is as a cure for insomnia.