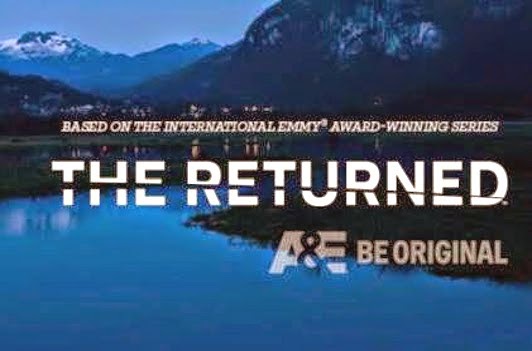 A school bus full of kiddies, including a girl called Camille, falls off a mountainous road.

Camille climbs her way out of the ravine and walks back to the town (which is in the middle of the mountains of the Pacific Northwest). As she walks home, a power cut shuts off the town

In town a group of people are meeting and a woman called Chris tells everyone that she and Matthew are having a baby and how the group has helped them keep going after their loss. Everyone is totally happy about this news (or really good at faking socially appropriate joy). Except for the grumpy guy, Jack, in the corner.

In the darkness, a woman (Claire) lights candles around pictures of Camille, it looks like a shrine. The peculiar power outage hardly lasts and back at the meeting Jack snarks at proposals for a (admittedly kind of ugly) monument commemorating 32 dead children – the kids who died in the bus crash. He seems to make a habit of being the grouchy one in the corner and he’s not the most popular

Camille goes home and starts making lots of sandwiches, much to the visible shock of Claire. She tries to recover rather than just staring poleaxed

On to the local bar where Camille’s sister Lena is doing shots and, in the back room, Jack gets dressed after clearly having sex with another woman. She’s fighting her husband for legal custody and Jack is giving her money. They’re interrupted when Claire calls and asks Jack to come to her house, sounding a little shaky to say the least.

Claire is still shellshocked around Camille, her daughter and hastily pulls apart her shrine. Jack comes over and joins the shellshock when he realises Camille is there – even opening the bathroom door in shock. Claire quickly fills Jack in that Camille remembers nothing – not the bus crash or the other kids dying.

Jack and Claire are joined by Peter who runs the support group and is a psychologist (Peter and Jack exchange angry eyes and if they attacked each other with antlers it couldn’t be clearer that Claire is the point of contention between them). Upon seeing Camille, he gets the same shell-shocked look. He gives Camille a super supportive speech about accepting what happened and being there to help her, which would be great if she actually knew what happened.

Jack manages to break out of his shock enough to call and leave a message with Lucy, before snarking nastily at Peter because being angry with Peter is much easier than processing one’s child returning from the dead.

Jack goes to Lucy demanding to have sex so he can talk to Camille. Yes Lucy is a sex medium. Lucy protests that she’s tired but he pushes her against the wall anyway and they have sex/séance with Lucy clearly making stuff up.  Jack is enraged that she has been conning him as he becomes more threatening she hits him and runs from the bar.

As she walks through a dark tunnel a figure in a hoody crosses her path – and stabs her repeatedly. He lowers her to the ground and she appears to be dead.

Onwards – Dr. Julie Han drives home from a shopping trip late at night and spots a young boy, alone, at a bus stop. When she stops to check on him he disappears. When she goes to her flat though, he follows her, staring through the window like every horror movie child ever. When she tries to talk to him he’s just silent. She brings him home, watched by her very very nosy neighbour Annie – to put her off, Julie gives the boy the name Victor. Despite not saying a word, the boy still manages to guilt eyes her into letting him stay the night. Before she finally makes him go to sleep she asks him to tell her his real name – and he says it’s Victor.

We follow another woman looking slightly confused (and not dressed warmly enough) as she goes home where there’s an old man asleep. She gets into bed beside him and he wakes up – and it’s shellshocked time again. He calls Julie, the doctor, but can’t think what to say and hangs up on her.

He goes out and walks to the top of the dam. He jumps off.

Next character! Simon, a young man, goes to the bar where Lena is drinking. There he asks to see a Rowan who works there as a waitress – but the barmaid has never heard of her. Lena steps in to show the very attractive Simon where Rowan lives. On the way they both talk about being regulars at the bar, but never having seen each other there. Added info is that Simon was born in town and Lena was tutored by Rowan.

Rowan is trying on wedding veil when she sees him in the window – shellshocked look time, though hers is more horror than shock. Simon hammers on the door, demanding she let him in while she screams “no” and bangs back, screaming at him to go away hysterically until her daughter checks on her and she calms down to reassure the little girl. Simon leaves.

Sherriff Thomas comes home later – he lives with Rowan – to reassure her when she tearfully tells him “it’s happening again.” It being “Simon stuff.”

Lena goes home and it’s her turn to be shellshocked over Camille – only now Camille is intearful shock as well, since 4 years changes her teenaged sister Lena far more than her parents.

To emphasise this we go back in time 4 years on the day of the bus trip (which Lena, Camille’s twin sister, avoided because she was sick) to when Claire and Jack were still together. Once Camille goes, Lena stops pretending to be sick and invites over a boy who she makes out with – a boy Lena and Camille both like. While Camille is on the bus that crashes, Lena is having sex (which Camille feels because twin powers?) She panics on the bus and yells to be let out.

Her noise distracts the driver so he doesn’t see the boy in the road – Victor – until it’s too late; he swerves off the road to avoid him, causing the crash.

This is the American re-make of a French series we’vealso covered. It promises to be very faithful to that series in terms of plot - but I'm not sure it manages it with the tension and atmosphere that so characterised the French show. The music, the lighting, the setting, the whole sense of the show doesn't have the same impact. It DOES have a lot of atmosphere, a lot of personal stories, as lot of excellent acting and emotion, a lot of creepiness but I don't think it's on the same level. It's trying and if I hadn't seen the original I think I'd be more impressed - but it feels like a ale ciopy.

The characterisations are also very similar – Camille blasé confidence, Jack’s pain, Simon’s intensity; perhaps Victor isn’t quite as creepy and Julie isn’t quite as haunted. They also do have a strong cast of characters and the overall quality is good... but, and I feel I'm going to say this a lot, the French one was better. This comparison is inevital because it’s almost a direct copy of the French version – which means it's always going to be seen through that lens. I think the acting comes close or equal but the setting just doesn't carry it as well

And I have to emphasise that it is a direct copy. This is virtually the same episode with almost no differences from the original. Even the names are almost the same. Almost which kind of touches on my not-all-that-enthralledness. This show is so similar to its French counterpart that I want to ask what the point is? If it’s going to stick so close to the original, to an extent that far eclipses shows like Being Human’s American remake, why not just watch the French one? I’m discomforted that the answer may simply be “because subtitles” or “because it’s set in France”. Something which feels all the more likely when characters like Camille and Julie and Claire keep the same name – but Jérôme becomes Jack, Pierre becomes Peter, Sandrine becomes Christine, Adèle becomes Rowan. Any name that is “too French” is anglicised (or Americanised rather).

One thing they have changed is racial diversity on the show. Julie is Asian which she wasn’t in the French version  and a lot of the background characters (like Pilar the shop assistant and Matthew one of the grieving parents) are POC. This promises at least one positive change in the series

I don’t like anything about Lucy’s depiction. I don’t see why a medium conning a grieving father has to have sex to do it (is the sex a way to convince us why the cynical Jack fell for it? Is the sex supposed to be telling us that Jack doesn’t fall for it but is just trying to rationalise visiting a sex worker?). Because the sex is unnecessarily brought into it, we also have the scene with highly dubious consent (Lucy initially says no and never really turns it into as clear yes) and her subsequent attack plays very much on the sex-worker-as-victim trope AND punishing a woman for being sexual. It’s a whole lot of fail in one characterisation