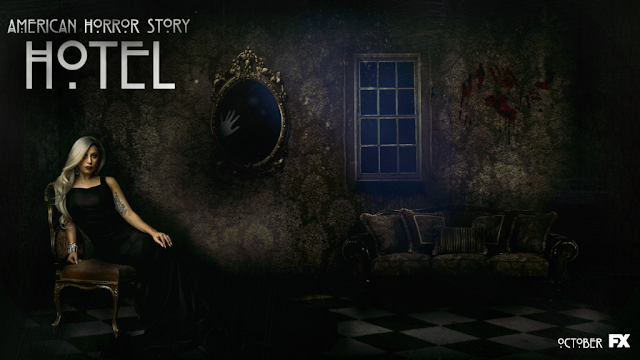 Well American Horror Story always brought great visuals – and the opening scenes of this incredible hotel certainly upholds that while being very creepy as receptionist Iris “welcomes” two new guests to the hotel.

As I’d expect from American Horror Story it also does some excellent job at being extremely creepy, along with a really chilling Shining homage. It definitely sets the tone! Right up to the screaming man sewn into the mattress.

I say it again, this show is good at atmospherics.

Iris claims ignorance but is not exactly upset as she moves her horrified tourists to a different room, (room 64) until the police arrive (or so she claims). When one of them is killed and eaten by some evil children.

And now the police are called in but for an entirely separate crime (and, it looks like, a different hotel) for a couple who have been murdered while having sex – and still in position. Except the man isn’t dead though he has had his eyes and tongue removed. Uh… the police are leaving him there while they collect evidence and not getting the guy to a hospital? Seriously, all the crime scene detectives are calmly going around checking evidence while the victim whimpers on the bed with a corpse on his groin.

It probably says a lot about me that I’m willing to accept a lot of randomness but this implausibility bothers me.

We have John Lowe and Detective Hahn checking the scene while completely ignoring the victim. John seems to have some Sherlockian skill going on.

John goes back to the police station both look at brutal crime scenes and talk to his adorable daughter over the phone (though his wife doesn’t want to talk which suggests that he has at least some hallmarks of the detective with a troubled family life.

John gets an apparent call from the killer claiming he’s going to repeat the crime – in Room 64 of Hotel Cortez, where the tourists are staying

Or were since a new guy books into the hotel and since he gives Iris attitude she puts him in Room 64 – and is claimed by… dear gods is that Sarah Poulson playing 80s reject? The credits name her as “hypodermic Sally” which bodes no good, but the guy checks into his room to take drugs and hallucinate a maid proud of her body cleanup skills and a figure wrapped in plastic who turns him over and pulls his trousers down – the figure has a drill on their groin. American Horror Story and rape… again.

John arrives at the hotel to check out room 64 and Liz Taylor is called to take him to room 64 (while talking cryptically in the lift) where the man is being brutally raped when Sally enters the room to demand the man say he loves her before he dies.

John enters the room and it’s empty – but he still lays down on the bed for a nap while someone gasps under it. He wakes to creepy vampire children doing their Shining bit because why not?

Anyway back to John who goes home to his loving daughter and snarky doctor wife (who has a wonderful anti-vaxxer rant which all right thinking people should praise and applaud her for! Go doctor!) I don’t think things are perfect with the couple. The child is apparently sharing ominous dreams with her father but before they can get into this he gets a message from his wife Alex, asking for help.

He rushes to the scene, leaving his child, Scarlett in the care of an easily distracted cop. A child who doesn’t know better than to go wandering. Lots of spookiness as they both enter a building and Scarlett finds two disembowelled men which, by the phone call, are the work of the same killer that left the poor guy with no eyes or tongue

Time for a flashback to 2010 with John, Alex, Scarlett and their so-far-unseen son Holden who disappears at the fair when John is distracted by his phone

Back to the present and Alex is duly terrified of a killer hunting them, exposing the rifts in their relationship – a rift caused by her loving her husband but constantly seeing her missing son in his face.

Back to the hotel the two tourists have been locked in glowing cages (cages made from neon lights) while Iris lectures them on their drug use before pouting a nasty blended concoctions down their throats until Sally shows up and they argue (Iris apparently judges everyone around in the hotel but can’t leave because of Sally who she blames for forcing her to endure the hotel). She leaves Sally with the women who entertains herself letting one go so she can try to escape. She reaches the door where Countess Elizabeth slits her throat and Iris apologises for her getting loose. Elizabeth is not impressed.

Time for a new visitor to hotel – only this man, Will Drake (and his son Lachlan) has bought the hotel, much to Iris and Liz’s shock who never knew it was for sale. The new owner heads up to the pent house to open the curtains, much to the annoyance of Donovan asleep on the sofa, naked, and unsurprisingly hating the sunlight.

He goes to express his anger to Elizabeth who is both indifferent and who apparently knows Will Drake, the fashion designer. I think he’s the one selling the hotel to the artistic designer (Donovan continues to disapprove) while she entertains the Lachlan. She takes him to the awesome playroom with giant Tetris walls of the vampire kids (three of them). The youngest child is called Holden which is certainly not a coincidence.

We learn why Iris is at the Hotel – she’s Donovan’s mother and works there so she can see him every day. He doesn’t share her affection.

Flashback! 1994 with Iris stalking Sally (Liz was on the hotel desk then) and checking into the hotel with Donovan. She follows all worried that Sally’s giving him drugs. They are taking drugs together in the hotel, and Donovan’s health is clearly not doing well (especially since she ignores his concerns about sharing needles)

I think drug addiction is going to be the theme of this season. There’s something to dread.

He collapses as Iris barges her way in. Sally leaves, high and uncaring – until Iris pushes her out of a very high window and she falls to her death on concrete. Iris staggers back to the room to find Elizabeth with her son, enthralled (rightly) by Donovan’s jawline.

Back to the present and John decides to leave home while the killer is caught to try and protect his family. Of course he moves into the Cortez hotel. He gets Room 64.

I say it again, American Horror Story is the master of the visuals – the setting is amazing, the costumes awesome and even the choreography of simple movement (Elizabeth and Donovan work so well together). The camera angles and directions are pure art – and I expect nothing less from this show, it has always been a visual joy (and I’m not just talking about Matt Bomer. And yes, Matt Bomer makes a glorious vampire). And I do miss some genuine evil vampires rather than the angsty kind we get so many off.

John has a daughter he insists on talking to and, even with a clearly busy schedule, makes time for. Maybe I’m just so used to the whole cliché of the hardboiled detective with a broken, tragic or non-existent family life but I found this quite surprising. But not as much as him completely ignoring the victim while gathering crime scene evidence.

However this is a show we’ve spoken on repeatedly for its problematic elements and it’s already opened with a brutal gratuitous and even sexualised rape (and of a man presenting with a lot of gay stereotypes, and it’s not the first time American Horror Story has used the idea of anally raping a gay man to death… ye gods what does it say when a show has more than one instance of this?!) This doesn’t give me much hope that the complex stories of addiction or any marginalised people are going to be well treated in this show. We’re already deep in the gratuitous shock for shock’s sake scenes.