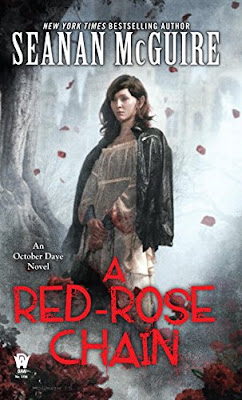 The Kingdom of Silences has declared war on the Kingdom of Mists. The new Queen Arden is far out of her depths and has little idea how to respond…

So she throws October at the problem. She’s no trained diplomat but she has good friends and she is very good at thinking on her feet

And with both the old Queen and a kingdom that considers Changelings beneath notice, it’s going to be a hard fight to be heard or listened to – or to stop a war that the King of Silences so cruelly wants. Even if she could stop the war, the ongoing injustice and cruelty of the Kingdom of Silences cannot be allowed to continue.

The story is immensely fun, as I definitely expect from this series. October Daye continues to be a scrappy character who runs around well out of her depth as is her wont. But she fights, she struggles and she rests on her friends and her unique abilities to get things done even if she so often has to make things up on the spot

The writing and pacing is, as always, excellent – always keeping me on the hook, reading until I reach the end of the books and all the… well not exactly twists and turns so much as constant questions and confusion. October doesn’t know what she’s doing and that’s really well portrayed in the text. She’s been thrown into a situation beyond her control and she has no plans, she’s incapable of planning in these circumstances. All she can do is run and hope to keep up and hope an answer, some answer presents itself so she can stop a war and save the people she loves

I really like how this is, in turn, reflected in Arden, the Queen. She’s also supremely out of her depth, after all she has only assumed the throne recently and before that she was a book store clerk. Without weakening her in the slightest she is depicted as exactly what she is – a woman who is completely overwhelmed and terrified and needs nudging back into the correct direction. It doesn’t make her a bad person or even a bad queen – any more than October’s flailing makes her and it’s a nice parallel between October and the Queen as we see them both try to adapt to a situation that is so far beyond her. As an extra bonus October’s epic speech to get her back on track is awesome.

I also appreciate the very reasonable mission creep of October: her moral outrage about how changelings are treated in the Kingdom of Silences is both very personal and nicely distanced. In some ways I appreciate how October can be more unemotional about the abuse of changelings, as a changeling, than her pure blood friends. She is a changeling, she has lived as a second class citizen in fae society all of her life. She is used to the abused so even while she can be deeply wounded and affected by it she isn’t shocked by it. She can see it and keep moving because even while it hurts her more than the others, she isn’t emotionally traumatised and shocked by it – because this is part of her reality. It reminds me very powerfully of how marginalised people and people outside that group can react to atrocities against them – when doubt is cast aside there’s often a level of shock from the people in power that the marginalised can’t afford or don’t get because it’s not shocking – it’s appalling, but it’s normal. It’s not unbelievable.

The excellent characterisation of so many of the characters are excellent – October and Tybalt have an excellent relationship I really like. It wonderfully balances both their love and fear for each other – especially since October has such an immense history of throwing herself into danger. But we also see learning from her – she, unlike so many others, actually relies on her friends, contacts and other characters. She knows she can’t do it alone and she will rely on people even while she worries about the, Quentin is fun as he continues to deal with who he is and October’s adventures.

Then there’s Marlis – her battle over how she lives among her enemies is wonderfully layered. I’m really impressed by her.

We also have some good marginalised characters – May and Jazz are two women in a relationship and Jazz is an Asian woman. While Jazz only appears very briefly at the beginning of the book, May is a major participant at least for the first half of the book and we even draw a little more on her nature as a Fetch which has often been passed over in books before now. She takes a back seat about half way through but she is a good character until then and very involved.

Unfortunately, Jazz is the only memorable POC in the book and she has such a minor role.

One of the regularly appearing characters in the book is also revealed to be trans and his depiction is pretty awesome. He’s skilled, capable and a long time friend of October’s. I also like the analysis of why he didn’t tell her before – it nicely upsets the idea of Changelings always being the oppressed masses by introducing the fact that, as more closely aligned to humanity, they’re more likely to absorb human prejudices. The acceptance of this character as part of fae society is excellent – because why should such a completely different society with completely alien beings in it absorb the same prejudices that we have?

We do have a gay male character… but only if you knew that Madden was gay from a previous book since it isn’t mentioned in this book at all. He’s a Cu Sidhe he’s a pet like servant of Arden (which is already an unpleasant trope) and is removed almost instantly. Even when he is incapacitated it is entirely for the sake of Arden – and even when people gather to grieve him there is no partner, instead a raging sister. It’s far from an ideal depiction.

One of the interesting world building elements has shaky aspects. Fae of mixed blood, especially from fae descended from both Mab and Titania tend to go insane. And while it’s an interesting source of conflict it also problematic in its depiction of the mentally ill – they’re just dangerous and unpredictable and scary.

The world building continues to be absolutely awesome – with a lot of rich research not just of the different fae creatures but also how they each fit into the greater culture. I especially love how they look at shapeshifters – both over prejudice against them for not being “properly” fae. Both the overt hatred of the Kingdom of Silence and the nicely hinted at prejudice of looking at, for example, the dog-like Cu Sidhe as pets and taking them for granted. I also like the way fae beasties are examined – it’s easy to dismiss them as monsters or dangerous creatures but as alien beings. Not quite people, not quite animals but entirely alien creatures who have to be considered very very differently. It all comes together as part of this awesome world. Not just the creatures, but also the history and the politics that has been built over and over to make such a rich world and makes it all so real. Yes the stories carry it, yes the excellent characterisations carry it and the excellent writing also carries it – but this all works to the next level making it all so much stronger.