The Vampire Diaries, Season 7, Episode 1: Day One of Twenty-two Thousand, Give or Take 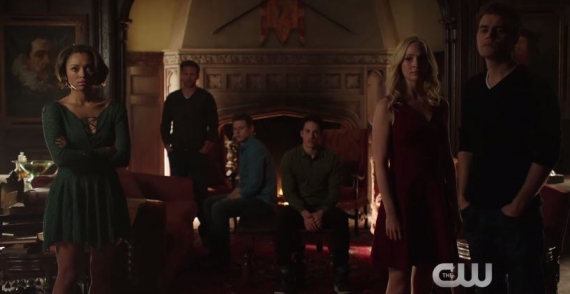 Now back to the present with Caroline writing a diary about Damon taking Alaric to “Europe” on a boozy party to help him grieve (Caroline thinks this is a bad idea… I actually don’t). Bonnie has been sent to chaperone because without Elena around she has to find some white people to play nursemaid to. Of course no-one is looking after Bonnie

Bonnie is keeping diary of their alcoholic adventures, judging them and getting friendly suggestions of dying form Stefan (this actually works as cute banter because Damon and Bonnie are actually pretty good at the frenemies thing. Oh dear good spellcheck does not object to “frenemies” the world is officially past saving, though it’s also uncomfortably true that if Bonnie dies, Elena is back).

Matt’s becoming a Deputy which no-one cares about

Caroline and Stefan are doing the awkward not!romance weird things since Stefan is totally waiting for her to decide she wants him while she’s still in mourning limbo.

To one of the witchpires, Valarie Stefan’s evil mother Lily realeased who pretty much hates everything (including being hit by cars). Even her family of witchpires: Lily, “stoic” Bo, “brat” Nora, “devious-mentor” Mary-Louise and Malcolm “Lily’s pet – the brown noser” don’t seem to be on her “like” list. They are all being bitter and nasty to each other over the short rations of blood they have. We do see Nora and Mary-Louise are a couple. Lily lectures them on how slaughter is a bad thing and got the imprisoned and they need to play nice. Lorenzo is, apparently, still in the picture as is some guy called Oscar. Lily is also de-factor leader despite not being a witchpire

And lo, already the cast is too damn big

Valarie is also not a fan of the whole not slaughtering people thing and while they all may hate each other they at least put on a face of caring for Valarie when she’s super upset. Valarie, Nora and Mary-Louise go out to unleash some slaughter vengeance, using blood and magic. Nora even takes a selfie with her victim and they don’t even try to cover up the deaths.

So Stefan and Matt are on the case. Yes, Matt is on the case. Is that not a message for despair? They pass the info on to Rick and Damon in the hope that drunken Rick can tell them how to make a bomb. This also means telling Damon and Bonnie that, yes, Lily has her evil family back. Damon is also still all sad about Elena and Bonnie has to comfort him before they find out that Rick isn’t actually drunk – he’s drinking tea not bourbon – he’s going to see alleged psychics to speak to his wife and beating up charlatans along the way

Bonnie and Damon get their own edge of sexual tension when Damon saves Bonnie’s life from a car accident – only Bonnie realises that, yes, it’s super awesome that he saved her life but with his vampire speed he actually hesitate to do so. The bitterness comes to the surface and, alas, Bonnie insisting that

Lily and Enzo (who are at least drinking scotch) meet up in New York because Lily wants Enzo to find something but won’t tell him why – because she doesn’t trust him but is willing to still use him. She has decided that her sons are monsters and wants Enzo to drop them while she drops lots of guilt on him. For the first time I applaud Enzo for telling her where to go with her bullshit.

Anyway Caroline has spied on the evil witchpires, Stefan has made a bomb and the plan is for Caroline to use it to kill them all in between romantic Stefan-Caroline tension. The bomb is successfully planted and Caroline gets away after a few close calls: and Stefan fees the need to taunt his mother about her dead family. Classy. She tells Stefan that there’s noooooo way a bomb has killed her evil family and they’re in for it now.

Nora and Mary-Louise are couply at Matt’s deputy graduation (making a nice moment about these ancient lesbians finally being able to be together in public) while Valarie is spiteful about the whole thing. Anyway they’re there for vengeance with evil magic (PLEASE KILL MATT!). They unleash their terrifying vengeance by…. Setting off the sprinklers. Ok, a mild prank. Then setting the water on fire, burning everyone and randomly ripping out the throats of others.

Alas, they do not kill Matt. With the body count on this show how has this character lived until season 7?! Bind weed is easier to get rid of!

The Heretics are not happy witchpires. They are extremely powerful and Stefan and Caroline are pretty helpless in the face of them – until Lily decides to step in to the utter carnage. She gives her family a new guilt trip over the bloodshed and takes her naughty witchpires home.

Stefan and Caroline go home with a whole lot of babbled shock from Caroline. And more sexual tension between them. Caroline worries about the town not surviving a war between them and the Heretics. Oh Caroline, an actual war between you would be very short and leave you very dead

Stefan thinks he has a plan to get through to Lily. Wait… get through to? She just told her clan to avoid bloodshed and play nice? She is actually doing everything you could possibly want her to.

Anyway they did the cover up while discussing how dangerous the Heretics are. Stefan makes a deal – the Heretics behave and get Mystical Falls which Caroline and Stefan arrange to evacuate. Anyone who trespasses there becomes fair game for snack food. Yes they halve Mystic Falls, give up the Salvatore home and absolutely abandon half of the town, driving out the people and the businesses.

This seems a little extreme

Caroline and Lorenzo also have an argument – pointing out that no-one likes him (sounds like he needs a seat on Matt’s death train).

And Damon comes home and is not amused. He mocks Stefan because, y’know, funsies. Stefan talks Damon out of all out war with the witchpires.

Bonnie goes to Matt and is also not happy with this solution – Matt’s not impressed since he kind of blames her for letting them out in the first place: Bonnie does not take that well given the huge amounts of bullshit she’s endured. Can we please kill him?

Damon decides to move into Bonnie’s dorm room where Bonnie again confronts Damon about the whole life-and-death hesitation thing in which Damon actually has a kind of decent speech on how Bonnie is his best friend and how they’re both totally stuck together. Bonnie still blames herself for the witchpires, Damon blames Lily and both of them want to fight the Witchpires. Yes, when faced with uber-powerful monsters who have proven themselves to be willing to live in peace unless you poke them with sticks Bonnie and Damon go find sharp sticks. Pokey pokey

Bonnie goes looking for Witchpires to attack – only she can’t match them. Damon can rip out their hearts at least and Malcolm is now apparently dead.

Or not, because they take him home (where Bo appears to be actually mute) and he looks more dessicated than dead - and Lily is super-duper devastated.

Caroline and Stefan make out. Well that was completely expected. And Caroline gets kidnapped by Enzo because he’s chosen Lily’s side.

Rick decides to go and see his wife’s corpse – yes, she hasn’t been buried yet, he’s just keeping her in the morgue. No this is not healthy grieving.

Back to 3 years in the future where a newly awakened Damon and Stefan are being attacked by a woman who is ”back” and has given Stefan a nifty scar. It looks like Stefan is the target.

+10 points for the show belatedly remembering its title and having everyone start writing diaries.

Rick wishes to find a psychic to communicate with his dead wife (oooh angst. I’d be more sympathetic if I gave even the teeniest of tiny fucks about Rick or Jo. But I didn’t then and don’t now). Damn if only Rick knew a witch. Maybe a witch with a special insight into the dead having once being a physical embodiment of the other side. Hey, maybe Bonnie knows someone….

Bonnie and Damon better be a couple at the end of this. Not because I’m especially invested in them being a couple and I think Bonnie can do better – but I at least want her to be personally invested in Damon if she’s going to be following him around and endlessly tolerating his “waaah you’re not Elena!” whining. She may as well get the payoff of his hot body since she’s doomed to be angsting sounding board and nursemaid for all time.

I have exactly 2 more episodes before Caroline/Stefan’s sexual tension before I start being sarcastic.

Wasn’t Lily a terrible ripper last season, what happened with that?

Anyway, the Witchpires are terribad and evil and… doing pretty much what Damon or Stefan does on a regular basis. Please, don’t tell me one random bloodbath isn’t completely forgiven on this show! And as for negotiating a deal with Lily – why? Before the provocation of the bomb, the Witchpires were doing pretty much exactly what they’d want – keeping their heads low and behaving. Yes they killed the hit-and-run-teens but, again, if a car hit Damon or Stefan or Lorenzo, or Elena are you telling me they WOULDN’T kill and eat the drivers? This is the problem of seven seasons of dubious morality from this show – it becomes difficult to present the big bads as the big bads. The witchpires have not done anything especially more deadly or evil than most of our protagonists – no-one felt the need to evacuate an entire neighbourhood because Damon moved to town, or Klaus (or any of the Originals, all of which are pretty much slaughtering evil folks). This whole storyline is ridiculously convoluted. They dragged everyone out of the town for… what? Seriously this makes even less sense than everyone caring about Elena

We do have The Vampire Diaries first lesbian couple - here's hoping they're treated better than this show has treated gay men. And I liked the moment where they realised they can be more open with affection while at the same time rather frowning at the idea that public PDAs from LGBT people are soooo accepted now (they're not) anywhere, let alone rural Virginia.