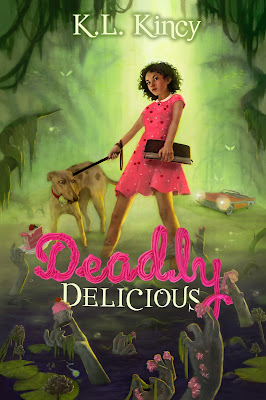 Jospehine DeLune is 12 years old and comes from a long family of powerful magical women, each of which baked their might conjure into their creations
Except for Josephine who has no magic and cannot cook… but she has to learn as she has drawn the attention of both a sinister figure, Shaula and, even worse, the dangerous gaze of the Ravenous One.
She now has to learn if she wants to avoid being devoured
I like this book it was fun and had a very fun concept – I love the idea of magic, and conjure, being so mixed with cooking. The whole way they use magic is excellently well written – putting together recipes with magical components and mundane baking. I do love the world building of it, it’s fun, and while it’s not entirely original it is certainly one of the best examples I’ve seen depicted. Just the mix of flour and sugar and Full Moon butter and any of the other mundane and strange ingredients added to make everything from curses to love potions all through food – from pickles to pies to cakes, the food is full of magic
And that even leads to zombies that crave cake – and it works with the story
With such a setting it would be very easy to make a story that was, perhaps, a little silly or too childish especially with a 12 year old protagonist. But it not only worked as a story but there were some nice deeper elements addressed as well – there’s some definite reflections on race (especially since this book is set in 1955) though some of them are confused with prejudice against her magical family, including Authelia a friend who drops Josephine when she wants to be popular and realises she can’t be while being friends with a Black girl. Or Quentin’s parents who are leery of him getting too close
It has to be noted that these prejudices are often conflated or linked to the hostility towards her as a witch. And, if anything, her difficulties seem under-presented considering this book is set in 1950s Missouri
In turn we also have some nice examinations of class and work – Josephine and her mother, Clara are concerned because they do not make much money and her magical bakery is threatened by corporate competition – especially when it comes with the money and power to demonise home baking in the press. Even aside from work, we see a number of people regard Clara with contempt and even pity because she works in the family business and because her parents aren’t wealthy – yet at the same time these people are happy to avail themselves of Clara‘s magical baking. Even her own coven, seemingly largely white women without a large amount of magical talent, are quick to take advantage of Clara‘s labour to present it as their own.
There’s also some nice character development from Josephine, Authelia             and Quentin who between them have a lot relationship growth – between trying to impress others or reacting out of anger, or magically adjusted emotions they work well together and grow a lot as kids. They’re not perfect but they’re learning their way and growing, it’s really well done.
The plot generally works as well – it’s nicely paced and makes a great use of its excellent world sitting and we have a whole lot of wonderful family interactions between Josephine and her family
Sadly there are no LGBT people in this book
The main glitch I have in the story is that Josephine keeps the actions of the Ravenous One secret from her mother for far too long. I know she doesn’t want to be part of the family business but she clearly has a decent relationship with her mother who clearly loves her. It’s a little odd that when a demon starts hunting her she decides not share this with her family. I’m glad it does change but for far too long she spends far too much time keeping it hidden and relying on a very shadowy uncertain figure for guidance. Now I don’t mind said shadowy unknown figure because I do like a little uncertainty and nuance that this figure brings – whether you trust her, whether resorting to darkness is required and a few more angles that I like.
It was fun, and had some great characters and a really nice world setting. The only sad part is that fun was all it was, it was a book I could read, smile, put down and not think of much again. It’s a very nice little read and it would be nice to see more sequels to build more on top of the introduction we’ve seen – however, as a stand alone it works.