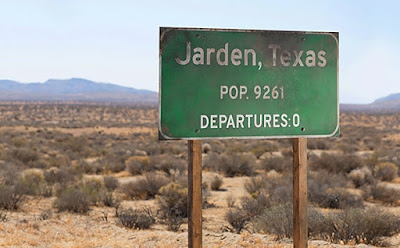 We open with naked people. Ah, yes, it’s on HBO.

A naked pregnant lady, caveman chic and an Earthquake to be exact. She gives birth during the quake which leaves her all alone in a prehistoric landscape…

…am I even watching the right show? Seriously I know it was going to reboot but what’s with the prehistory prequel?

Cave lady is bitten by a snake saving her new baby and eventually dies, leaving her baby to be found by another cave lady.

We move from this ancient scene to the same pond in the (presumably) modern world and several teens playing in the water. We meet Dr. Brian Goodheart (who is doing science in the water) and Evie. There are, oddly, lots of signs declaring the water forbidden to none residents and forbidding the taking of water.

Evie goes home to the rest of her family, brother Michael, mother Erika and father John (who is a deep sleeper with a cruel cruel family). The water Evie brought back is still treated as super special. Even after a short time I think these guys are kind of fun.

Ok, time for some more randomness – including a crack in the road that is covered in a protective glass box and a woman watering her garden in a wedding dress (hey, why pay all that money for a dress you’re going to wear once? Good on her for getting her money’s worth!) and a hermit on a pole with “miracle” carved into it (well, sort of helmet) all of which combines with the cave man opening to make me think we’re playing a game of Madlibs. Michael delivers breakfast to the hermit and gets a letter in exchange.

Michael sets up among several market stalls catering to tourists – and the tourists are there because Miracle, Texas, is the only town in America which had no Departures. No-one vanished. Michael is there to sell water from the Jaden spring the (pond at the beginning). The tourists arrive and it’s clearly a religious experience for many and others – especially the sick and disabled, are definitely there for miracles like some kind of Texan Lourdes. The tourists even come from outside the US (so I take it this town may be the only place in the world without a Disappearance). Michael is offering his water – but won’t set a price and refuses to say it is more than a “souvenir” when people clearly want magic super water. He also tries to encourage them to attend a church service.

John goes to see his friend Isaac who is selling psychic woo-woo finger painting to a huge crowd of tourists for a whole lot of money. John does not believe Isaac’s schtick (though it may be real since Isaac predicts some kind of terribad thing to happen to him). John calls him on his fraud but Isaac insists – it’s real.

Interlude to a big religious song of praise for Miracle being spared and then more naked women (HBO) jogging through the woods. Bad idea, you’re just asking to snag on some branches or stones or bears or other terrible nature thing. It’s all fun until someone steps on a racoon. I’m not quite sure what the naked jogging is about – more madlibs.

All through these madlibs we keep getting ominous music playing. I am not impressed by ominous music without ominous stuff happening

John is a fireman and he and his fellows suit up and quite numbers which apparently connect to Isaac somehow (much to the other firemen’s objections). They go to Isaac’s house, kick Isaac out brutally and burn his house down. Apparently because he’s selling fraudulent woo-woo.

Isaac is treated by Erika who a) tries to get him to leave town and b) is not even slightly impressed by an apparent psychic who couldn’t predict his own house been burned down. He still insists something bad is coming

The next day Eika digs up something in the woods – a living bird. A living bird that was buried and is still alive when she digs it up – it flies away. After that she goes home and the family goes to church where Michael is preaching and the preacher stands up to say he’s going for surgery and Matt is going to take over his church while he’s gone – that’s Matt from the first season, the first recurring character, the priest who lost his church to the Guilty Remnant. His wife is also there – in a wheelchair but has recovered from her comatose state. Ominous music plays as it seems he attributes that healing to the town (we also focus on John) and the current preacher is quick to cut him off.

After the service, John catches the two preachers to try and draw Matt out but Matt is cagey.

Church service over the Murphy family goes to eat and someone brings a goat into the restaurant and sacrifices it in the middle of the room. No-one considers it to be especially weird, even if they do see it as slightly annoying.

Also John may believe the ominous warnings of Isaac she he was leery about fishing something out of the garbage disposal. Though that could just be common sense

Michael again goes to feed the Hermit and rides into the park where we see non-residents trying to get in and being stopped by the police with tasers. Inside the restricted area Michael meets a guy who lives there and they pray.

The next day John wakes up to random pie on his doorstep (while I’m always a fan of pie – I’m not a fan of random doorstep food). Would anyone actually eat doorstep pie – and sees Kevin Garvey and family move in next door. Erika follows my reasoning and suspects poisoning (though she thinks it’s a joke. No way I’d trust it.) John decides he’s going to invite them to dinner and Erika calls this “working” in his birthday (it’s his birthday which may explain the pie, but not why inviting people to dinner is work).

So he goes to invite them – the Garvey family also includes Kevin’s partner Nora Durst, baby Lily (Christine and Wayne’s baby?) and at the BBQ we have full introductions and the last Garvey, Jill. Evie and Jill seem to bond as friends when Evie makes a grossly rude comment pointing out the obvious – baby Lily is Black. We also learn that all new residents get armbands that allow them into the park (until they’re recognised and the arm bands are unneeded). Nora fills in on the family connections and tells them that Matt is her brother while Kevin is spaced out and kind of creepy

More awkward dinner time and we learn John was in prison for attempted murder. “I didn’t try hard enough.” We also learn Evie has Epilepsy and occasionally goes into fugue states. The BBQ goes well, if awkwardly.

And we get another Earthquake during the night – this one much much worse, but it does reveal Evie didn’t come home with her friends despite it being 3:00am. Not only that but her friends, Taylor and Violet are also missing. There’s a lot of worry and Michael takes his dad to the lake where Evie and her friends swim.

They find her friend’s car – and Evie’s phone inside. And the pond has dried up. Evie is nowhere to be found.

Isn’t it a trifle bizarre to have a white man replacing a Black preacher in an entirely Black church? This church isn’t even a tiny bit racially mixed, every member of that congregation is Black – they couldn’t or wouldn’t find a Black preacher to fill the old preacher’s shoes? I’m not a church goer by any stripe but that seems odd.

I’m curious about John – so fiercely against people selling snake oil in his town. Now, I’m generally very leery of anyone who is against “fraudulent” mysticism but happy to support a church that hands around a collection plate (since it’s less a matter of fraud and more a matter of which belief systems have power and are granted a veneer of respectability) but the ominous music when he looks at Matt implies he has a similar attitude to Matt claiming Mary’s health miracle.

I’m still confused as to exactly why John is this passionately furious about people selling Miracle’s miracle. But then I’m curious about a lot of this show – which is kind of where I am at the moment, curious and a trifle confused. We had a whole lot of random in a short space of time. And while it’s clearly a complete reboot of the first season, I’m leery. The first season contained a whole lot of random woo-woo (the dogs, the deer, the take-away-pain-guy) which didn’t go anywhere at all. Shows that just throw out lots of mystery with no answers have increasingly got on my last nerve

At first glance this show seems to have several very prominent Black characters – even protagonists. I’m not praising yet though, I’ve seen a whole lot of shows that started with hugely racially diverse casts then killed half of them off or pushed them into the background. Similarly I’m going to wait and see what is happening with Mary and if she’s just going to be a catatonic woman people talk down to – but we also have Evie as an epileptic with no apparent tropes.