Supernatural, Season 11, Episode 1: Out of the Darkness, Into the Fire 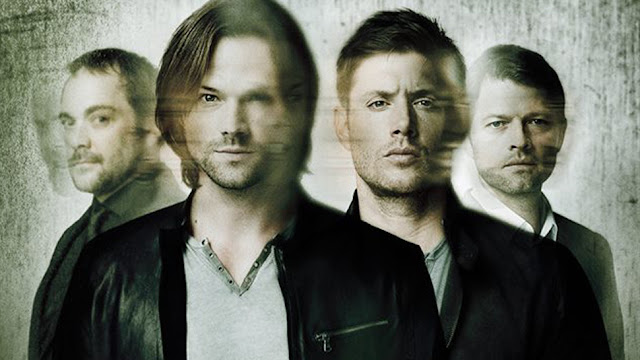 Can we just pause and grasp this a second? Season 11. That’s a whole long time for a show to keep going – and, as always, leaves me leery about running out of ideas. So before this season even starts I am muttering an urgent wish that we not get a season of brother drama “I will give everything to save you/no I won’t/yes I will.”

Anyway to the plot – big scary darkness has been unleashed and Dean is in the middle of it... with a woman

While Sam is alone in the wrecked Impala (waait, WRECKED IMPALA!?) remembering running from the darkness, it catching them and Dean disappearing. Sam finds Dean and apparently nothing’s wrong (yeaaaah right.) Dean claims the woman saved him – and calls her The Darkness and she’s super grateful to be free but Dean has still decided she’s evil and they need to put her back.

They drive off (no the Impala wasn’t that wrecked) and find a whole load of bodies in the road. They find a living man with black lines on his neck – he keeps advancing on them not listening to them until a police woman shoots him and demands to see Sam and Dean’s skin (me too) to prove they haven’t got the evil dark lines (yeah for that reason as well. I guess). Her demands to see skin would make more sense if Sam’s open necked shirt wasn’t already clear. She’s also been injured and describes how the black-veined people went on a rampage.

They take her to the hospital while Sam is, pretty reasonably, blaming all this on the Darkness while Dean is much more cynical (or, perhaps, less willing to make assumptions). The hospital is full of bodies so of course the team splits up with Sam exploring while Dean patches up Jenna and gives her a pep talk about killing people she’s known her whole life because thinks suck.

The gang comes together after Sam finds a survivor, Mike, and his new born baby who describes the raging possessed road crew running amok – but as they watch him they see black lines creeping up his neck. It looks contagious, Mike is turning after being attacked 3-4 hours ago.

Of course the debate then is what to do about Mike and Sam points out that the guy he saw just keeled over and died so it’s possible the Infected simply don’t last long. Dean’s not a big fan of this plan – though Mike’s deal is for him to go hide somewhere if they will look after his baby, appealing to Jenna to take care of his daughter.

They also see more of the possessed. Sam and Jenna both support the idea of waiting for them to die but Dean nixes it – how long can you wait and how many more do they infect while you wait?

Last season Rowena cast her raging fury spell on Castiel and set him on Crowley – and Castiel did stab the king of Hell with an angel blade and is now not doing well with the aftermath as the spell wears off – though Crowley did escape his body before being all stabbed to death. The lack of control thing remains it seems – possibly making him a threat to anyone he runs into though he does manage to run from several farmers.

As police gather, Castiel prays – not to help him but to stop him hurting more people. He does manage to call Dean to tell them about Rowena out there with all kinds of black magic but he really wants to know if Dean is unmarked or if he is still carrying the Mark of Caine. They try to get Castiel to tell them all about the Darkness (though he is confused by the idea of her being a woman. Alas exposition is interrupted by angels answering Castiel’s call.

Of course Castiel isn’t exactly popular with the Heavenly Host after his many many shenanigans and he is chained and hooded by the very hostile angels. They do not take him to heaven.

Dean and Sam have a moment analysing their many many many bad decisions and how maybe they shouldn’t go rampaging as usual, killing things and asking questions never. Dean is still all for killing all – while Sam desperately appeals for learning. He would like to focus more on saving people – including innocents who are infected – rather than leaving death in their wake.

“Saving people means saving all people, not just that baby, not just each other.” Is Sam’s clear words – and with that he insists that THEY change, not just him or one of them –both of them. And that means letting Sam risk his life to help save others –let Sam take the risks Dean is always so willing to take

So Sam lures away the Infected while Dean and Jenna get to the car – but the Infected catch him. One he kills and bleeds on him then the others… walk away. The implication is Sam is infected.

Dean and Jenna leave, managing to get past an infected and struggling Mike who tells them the baby is called Amarra before he collapses and dies. Dean gets her to safety then checks in with Sam – who pretends to be good and looking for a cure. Dean is all positive – Sam pretends to be but he already has the dark veins of the infected.

We have some more flashbacks of Dean in the Darkness with the woman who is all happy and peaceful and not quite understanding Dean’s hostility. Just as he doesn’t understand why she hasn’t hurt him. She declares they are bound because of the Mark of Cain. She says they will always help each other. She has the mark of Cain on her

As does little baby Amarra….

He is returned to his old body and demons who are leery especially when they hear that the Darkness has been unleashed. In the Cage either Michael or Lucifer has panicked about this and this has led to a substantial amount of Hell’s denizens also freaking out.

I actually kind of like Dean’s doubt – because he’s not saying that Sam is wrong per se – it’s just that literally ANYTHING could be true now. Of course, it could be that he’s reluctant to blame the darkness because connection- or because she’s an attractive woman.

I am desperately hoping that Sam’s appeal for Dean to think is exactly what I hoped for when this episode began – a chance for Dean and Sam to learn and grow and actually change. Please! Let this be finally what we were asking for. And I would love to see their hunting turn back to SAVING people rather than just finding and killing things. Remember when they used to exorcise demons? Rather than just killing on sight? We need that refocusing very badly to stop them leaving rampages and death in their wake. We need to see them saving the world, not constantly endangering it for their own good – we need to see them as a force for more than just survival and chaos.

This could be excellent growth – it has really raised my hopes for this season that this is the opening episode, that this is being set up as the conflict for the season. Please let this continue!

That includes their attitude to sacrifice. The brothers have never had a problem with self-sacrifice, just allowing each other to sacrifice themselves has always been a problem. They take huge risks out of self-sacrifice but then the other brother sabotages it and causes chaos undoing it

What I don’t like is the show’s desperate attempt to sell us horror. Oh ominous music, I don’t care how ominous you are, Sam hiding behind the corner, with a gun, from a ghuy with black veins in his neck isn’t scary. And why does he look so damn afraid? This is season 11 of Supernatural. They have killed vampires, demons, werewolves, leviathans (though we all pretend that season never happened), ghosts and death itself – monster beyond count have been duly slaughtered. An unarmed man banging on a metal door does not ping the threat meter. Caution, maybe, but fear?

I think this is one thing Supernatural has often got wrong over its 11 seasons – it’s forgotten how huge the series is and has failed to grow the characters to reflect that long history. This was similar to the problem of Frankenstein in the last season – after the epic they’ve faced you need something pretty major to be ominous – and it is ok for something to be a threat needing dealing with WITHOUT it being super ominous.

I don’t know if I’m happy Crowley is back in his old body (because Mark Shepherd is awesome) or sad that we don’t have him keep the new body and examine the potential of that.