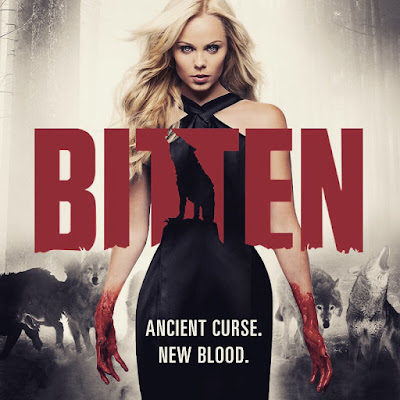 Time for the tense sand off – with Elena very much wary of Jeremy’s intentions and plans. While Clay still wants her to trust Jeremy, Elena rightly points out that Jeremy’s priorities are larger than her family. Especially since Katja and Alexei are being used as bargaining chips

Elena is left guarding Constantine, Roman’s son and the Pack’s own bargaining chip as he pokes her history and just why Elena is the only female werewolf (answer – because it’s an annoying trope that happens repeatedly in so many werewolf stories in order to justify a nearly all male cast with a heavy emphasis on Exceptional Woman tropes and a whole lot of delicate-precious-in-your-gilded-cage companion tropes). With a relatively logical series of deduction, Constantine realises that Elena is Sasha’s daughter. Which also makes her the daughter of Natalya – Roman’s daughter.  Ooooh twist.

They fight and Constantine escapes (with a broken wrist) and we have to go to where Jeremy, Sasha and Roman are having tense negotiations to hear the rest of the story

Like any good werewolf, Roman abandoned his daughter Natalya because she’s human (aforementioned only-female-werewolf-specialness) and by universal law she couldn’t know about the werewolves. A law Jeremy agrees with, humans can’t know about them (which is going to get awkward). Because he still cared about his daughter he had Sasha watch her and protect her. Instead cupid hit, he fell in love and decided to show Natalya that werewolves are real.

Roman, following the law, killed his own daughter to keep their secret. Lots of pain, angst, guilt and rage – but all very justified and well acted. That’s a whole terrible, painful mess to unpick. Which, of course, puts Elena in the middle of it.

Jeremy’s attempted plan to bring peace is to offer Roman lots of counterfeit money so he can continue to bribe his large, sprawling pack into obedience (which is how Roman manages to hold his pack together and is getting shaky since the Russian pack is having money troubles).

But roman wants vengeance more, draws a knife and summons his wolves to fight it out. And things get even more messy

Karen, the ex-sheriff continues to investigate the suspicion Russian gangsters who have suddenly come to her town. Following them around she gets in the middle of the fight. She ends up stabbed in the leg by a running Roman (who fled with his big wadge of cash) and she sees Alexei have his first change… and go running off

Alexei is later found back in human form. But also smelling of human blood. It looks like he snacked on forbidden meat

While there’s lots of major conflict, there’s another undercurrent: Katja. Throughout this episode she has expressed a wish to live a normal life, move to a big city, get a job and a career. She’s not a werewolf, she doesn’t need other wolves around like her brother nor is the idea of getting to know the big sister she’s never known really motivation to make her want to stay in the middle of nowhere… but she knows the big secret. Which, along with Karen’s witnesses Alexei’s change, means Jeremy’s going be confronted by this rule very soon. Especially since, during the negotiations, he didn’t disagree with Roman’s decision to kill his daughter to preserve the werewolf secret

That’s going to be awkward…. Especially since they’ been poking at the beginnings of a Jeremy/Karen relationship.